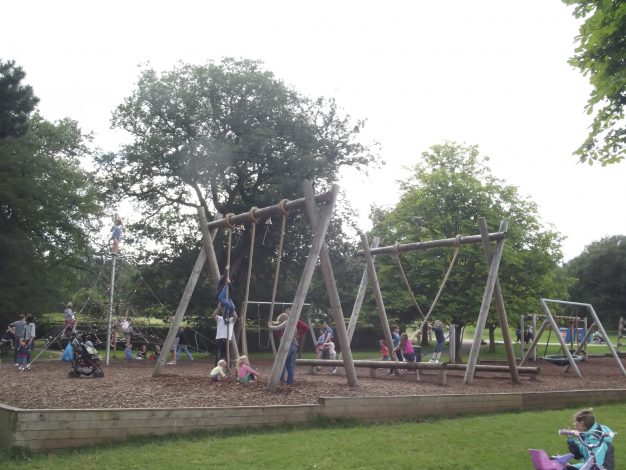 This article presents a case study interview with Tom Burns. We have interviewed Tom to find out how he got involved in adventure play, and what he thinks of the benefits and also challenges of this sort of play are.

Who is Tom Burns?

Tom Burns works as a Senior Lecturer in the Centre for Professional Education and Development at London Metropolitan University, United Kingdom (UK). As a mature undergraduate student at the University of Essex, Tom was the first to put on an international festival of the work of Dario Fo in the UK celebrating the playwright’s work. Always interested in theatre and the arts, and their role in teaching and learning, as a young person Tom set up events and festivals for his local community that were centred on the establishment of an adventure playground.

The interview took place during a regular lecture/seminar session with first year undergraduate students taking a degree in Education Studies at London Metropolitan University. The session was part of a module entitled Education and Encounter in the Global City and the interview, involving Tom, other staff and the students, was the centrepiece of an exploration of play in the city.

This case study captures the conversation as it unfolded and embraces many of the discussions surrounding children, play and risk. It also speaks to the sort of deterministic notions of adventure play promoting ideological conformity to economic and social imperatives that lie beyond the interests of children and the motivation of many play-enablers.

The world Tom Burns presents to us offers an affirmation of child agency; and, thereby disavows the fixity found in formal institutions and their enframing of so much of children’s time and space in 21st century life. There is an argument for free-play, although, as Tom suggests, the very circumstances children grow up in and the spaces available for them have changed. It seems therefore timely therefore to reconsider not only the value of children’s play but also the physical locations where this play can and should happen. The case study opens this discussion and provides historical insights into the idea of adventure play in the London.

Tom, thanks for agreeing to take part in this interview. You have been actively involved in setting up an adventure playground. However, before discussing this in more detail, can you tell us a bit more about yourself, your background?

Tom Burns (TB): My family had emerged from the East End of London where we had been active members of Trades Unions and political parties; were instrumental in forming and supporting Tenant Associations; and were active in numerous community arts projects such as Stratford East Theatre with Joan Littlewood, the Basement of the Town Hall in Cable Street with Dan Jones, the Whitechapel Art Gallery, the Half Moon Theatre. We were poor but we were active and creative, as the old song did not say. At the age of three my family moved out of the three-bedroom tenement block on the Isle of Dogs shared with grandparents and some of their other (seven sons and one daughter) children. There were six of us. The new maisonette in Bow we moved into had three bedrooms and an indoor bathroom, multi-national neighbours, fantastic music, parties … and this was still the time when people left their front doors open … No locks. However, the maisonette was infested with fleas. The buildings were shoddy – connecting pipe work allowed vermin to move between flats. My parents had constant battles with the council, neighbours and the fleas: the council thought it impossible to have infestation in a new block and the neighbours lied about not having fleas – fearing they would be accused of being dirty, unclean. So they said: ‘We have no fleas’. The boys in the family were getting older and the fleas were finally acknowledged by the council – so my family took the Kings Shilling and we were rehoused ten stops along on the tube in the open space and fresh air of the suburbs. On leaving the East End people cried – and life would never be the same again.

Moving to the green suburbs, why did you see the need to set up an adventure playground?

TB: The adventure playground I was involved with was a scrap piece of land that was designated to have garages built on it. I was fourteen or fifteen at that time. The oldest person was eighteen. We decided to squat on that piece of land and run a summer camp, spontaneously. Then we gathered the petitions from the schools in the area to get the support that you need to take a project like this forward.

This means, you squatted on a piece of land and simply stayed, developing the camp into a playground?

TB: It was always the intention for it to be an adventure playground; but we needed to do it properly. For that camp to become an adventure playground we had to get insurance, and we made sure it followed health and safety rules. We also gathered further support from the local community – and we needed resources. It was a derelict piece of land and we had to get scraps from building sites and the local factories – pallets of paint … We had to get telegraph poles, hard-core … We learned how to hire and direct JCBs and low loaders. We had to get toilets – plumbed in. We sorted out 3-phase-electricity.

Who was initially involved?

TB: We were a group of young people who set that up on our own. Kids from the council estate. It was our initiative. The oldest was eighteen, the youngest was three.

What was the idea?

TB: The idea was to avoid control from local authority. We wanted it to be in our control. This was also why we set it up, and why it was for most of the time, self-financing. We raised the money for it through dances, events, festivals and raffles. We raised the money to support the playground. In lots of ways that is how we liked it because this kept authorities and other controlling influences away.

And who did not attend?

TB: We had children that were not allowed to come. Their parents worried who they were going to meet on the playground. They did not worry about the structures, the activities and the danger. They wanted to mix their children with a better class. Although we were all working class, they were worried about the people their children would mix with. However, we never ever held a kid off. If they wanted to come, they came. If parents came and said we’ve told you not to let this kid on, we said: ‘Excuse me, this is our adventure playground. Please leave. Go away’. And this is the reason why the kids loved you. So, some kids would bring a change of clothes with them so they could go home afterwards without their parents knowing.

Why do you think these children attended – or wanted to attend?

TB: There was something that was missing from their life, which they were not getting from home or school and which they found on this playground. This would obviously be different for every single kid that was involved and joined the journey. The kids did it together. It was not the grown-ups managing them. It was the kids themselves. I think they found themselves. They became. They became a person, a human being.