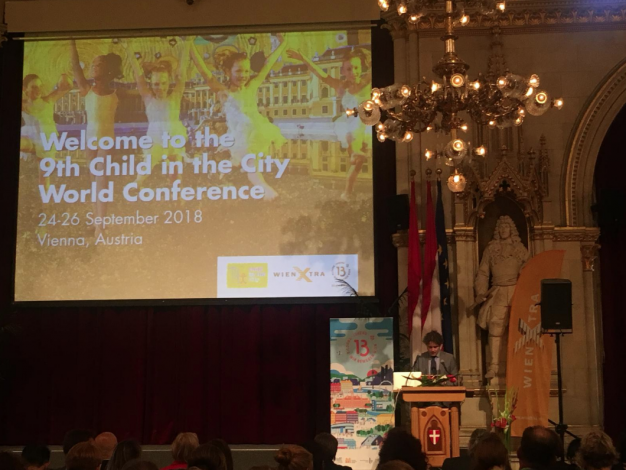 This bi-annual event was held over three days, bringing together a vast amount of professional expertise on the rights of children in cities. Joan Blaas, board member at Child in the City Foundation, officially opened proceedings on Monday, saying it was a ‘privilege and pleasure’ on behalf of the foundation to welcome delegates to Austria’s capital.

Vienna followed in the footsteps of other illustrious European cities which have hosted this high-profile event, including London, Rotterdam, Ghent, Stuttgart, Florence, Zagreb and Odense.

“Child in the City is committed to improving the quality of life for every child,” he said. “We want all children, regardless their colour, religion, background, or in which city they live, to have a happy childhood and achieve their full potential. Our task is to make this possible.

“Our mission is to bring together government representatives, play workers, urban designers, mobility experts, academics and many other professionals in the field so they can share their knowledge and learn from each other,” added Mr Blaas.

The first Child in the City World Conference took place in 2002, and came as a result of the United Nations Convention on the Rights of the Child, which put a responsibility on countries and governments to implement the rights of children.

“The founding fathers of this conference, Jan van Gils and Johan Haarhuis, teamed up together to organise the first edition in Bruges. This was a great success and other cities invited them to be their host,” Joan Blaas told delegates. “Over 100 speakers will share their knowledge and we look forward not only to listening but also debating with them in the coming days.”

Taking place in Vienna City Hall, Child in the City World Conference 2018 played host to a variety of keynote speakers and parallel sessions, all dedicated to stimulating debate about future initiatives, and sharing good practice about projects which are already helping children in cities across the world.

“Two years ago in Ghent we realised that Child in the City was no longer just a European initiative, so we said to ourselves we should call it the Child in the City World Conference,” he said. “We also decided that we would start organising smaller regional seminars, which we did in Rotterdam and in London last year.”

This year’s event attracted some 340 delegates from 47 countries, including as far afield as Ethiopia, Iran, Azerbajan, China, Japan, Peru, Thailand, Russia and Brazil. Chairing the conference was Lia Karsten, Associate Professor at the University of Amsterdam.

“That so many of you have travelled such long distances to be here serves as a reminder to us all just how important our work is,” said Joan Blaas. “Not everybody can travel so far – but Child in the City can travel to your community,” he concluded.

Child in the City World Conference 2018 had a dedicated Programme Committee from co-hosts WienXtra, featuring Bettina Schwarzmayr, Sonja Brauner, Birgit Kollek and Herbert Rosensting, all of them experts in their particular field of children’s rights in Austria.

There is also a Child in the City Foundation Scientific Committee, which was responsible for developing the speaking programme for 2018. Committee members Lia Karsten, Irene Quintáns, Carlo Fabian and Froukje Hajer have drawn on their combined vast experiences of the child rights arena to bring together the programme on behalf of the Foundation.

Stories and features from this year’s conference will be on the Child in the City news and dedicated conference websites, as well as Facebook and Twitter pages.