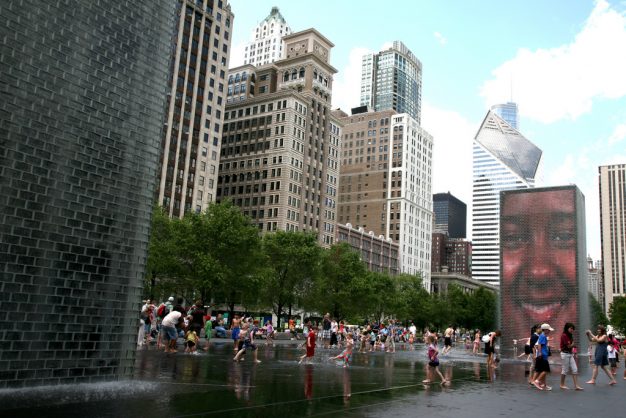 Manifesto for a playful city

‘Seventy per cent of the world’s population will be living in urban areas by the middle of this century’ (Klanten and Hubner, 2010:2). As cities continue to get more populated, more and more strain will be put on cities to provide adequate facilities for their citizens, including those for play.

Cities today are no longer playful: modernism and capitalism have together managed to destroy both the playful city itself and the playful attitude people once had ‘many persons feel that cities are no longer any good or any fun’ (Friedberg and Berkeley 1970:12).

If we define playful as full of play, our cities are seen to provide very few opportunities to play. Those it does provide are restricted to certain ages of people, times, places and typologies; little is done to understand peoples play needs and changing wants. The city does not understand play. We believe that if the city understood play and its importance to the both the human and the city, it would aim to create a more playful city – a city ultimately more enjoyable for all. I propose a city in which the importance of play is understood for both the city and its citizens.

Play is seen to be key to civic life, and ‘play is (seen as) a tool for further development of our culture’ (Hendricks, 2001:11). Play is seen as a legitimate function for parts of the city and provided for in the same way that commerce, transport and housing are. Play is given its own space in the city, not just made to fill leftover spaces. Art, music, theatre and all ‘playful’ subjects are supported both at an educational and national level.

As Brian Sutton Smith once noted ‘We all play occasionally, and we know what play feels like. But when it to making theoretical statements about what play is, we all fall into silliness’ (Sutton-Smith, 1997:2). Much ambiguity lies around the definition of play, for centuries we as a civilisation have tried to define and understand it with little success – this perhaps explaining why cities find it very hard to design for it. As psychiatrist Scott Brown describes in his book Play (2010:20) it as ‘an absorbing, apparently purposeless activity that provides enjoyment and a suspension of self consciousness and sense of time.’ With no real ‘purpose’ as an activity, play is somewhat taboo; as Brown (2010:17) goes on to explain ‘Play is done for its own sake. That is why some people think it’s a waste is time.’

For many play has come to be seen as a ‘luxury’ activity rather than a necessity, for those who have time and money on their hands, and even sinful according to Puritan teaching. (This may be largely due to historic examples of play where the play was associated with wealth, and the need not to work.) It is this apparent ‘uselessness’ as an activity, that has led some schools to remove ‘non- necessary’ music and art from their curriculum in favour of more academic pursuits ‘in many school districts, even recess and physical education have been severely reduced or even eliminate’(Brown, 2010:99). Play is seen to be the opposite of work; it goes against everything society is aiming to achieve. With this attitude in society, many governments have found it hard to justify spending money on providing for play ‘as we know, public budgets are stretched taut, and recreation is too often near the bottom of the list if essentials’(Friedberg and Berkeley, 1970:12). As a result of this play provision in cities has been poor. Little space in the city has been given to play- play has always found its home on leftover spaces from other ‘necessary’ buildings and services. Engaging in, and building for play, is often met with hostility.

Play is, however, an integral part of our cities, and has played an important part historically in shaping society today. Play is a natural instinct for humans; Huizinga (2000: Foreword) described us as ‘Homo Ludens, Man the Player’. Play is older than civilisation itself, ‘Play is not an activity that developed as civilisation became more sophisticated; rather play was at the heart of the start of civilisation’ (Cohen,1993:20). Play has played a large part in defining civilisation – with much of our civilisation war, work, politics all developing from play. Much of what we describe today as our cities ‘culture’ – theatre, music and art – can be seen as a type play. Thus, play holds a vital part in defining and sustaining our present day cities. The culture of a city plays a key role in attracting people to live in and visit many of our cities.

Play for all ages

Play should be seen as a function for cities in itself. As Friedberg and Berkeley (1970:12) describe ‘Recreation is very much a part of the total planning process and should be integrated with education, housing, commerce and transportation. To exclude recreation from the initial planning is to reduce its impact.’ ‘The playful city’ is not a new idea, we have continued to play in cities throughout history; up to as late as Victorian times we were playing ‘games of hide and seek, grass bowling and nine pins were everyday events……at this time playing was still an acceptable behaviour for adults – even serious adult men’ (Hendricks, 2001:169).

Paradoxically, it was the interest in play at this stage and its ambiguities (as discussed) that led to its abandonment on scientific grounds; ‘we have not yet outgrown this Victorian legacy’(Cohen, 1993: 16). The playful city existed before, and is within our reach again. ‘The twenty first century should be the century when it becomes acceptable to be a lifelong player – when it is recognised that players enjoy a long life’ (Hendricks, 2001:).The playful city supports and provides activities that appeal to a mixture of different ages groups, and allow people of all ages to play together successfully.

Play is universally linked to healthy brain development. Following birth, when the brain is developing most rapidly, we, as children, require a large amount of play to help shape our growing brain. However, Brown (2010) describes studies show that through play we can continue to develop our brain right through our lives.

Play is constantly in flux; it changes with the city.

In the Playful City, the fleeting nature of play is understood and designed for accordingly. All play spaces are designed so that they are flexible and can be adapted to changing needs and use. Temporary play is recognised and designed for, from a few hours to a few days. In the playful city we recognise that playfulness is more an ingredient of how people see the city, rather than a specific thing to design for. Play is kept in mind in the design of everything.

The city is in a constant state of flux – a continually changing population, with its new ideas and technology, have a constant impact on the city. City users are constantly finding new ways to play in response to their changing environment. However, city planners design for the city as if it was static. Much of the play equipment we see in our cities today has not changed its design for over 50 years. Much of the equipment is no longer relevant, as play constantly evolves; as Friedberg and Berkeley (1970: 37) sights ‘preconceptions that the traditional swing, slide, and seesaw provide a desirable play experience must be questioned.’ People in the city change, yet the city does not change with them. ‘The end of the twentieth century has brought with it many paradoxes. In the well fed, well developed world, games are all the rage for children and adults too. One mark of the so called post modern adults is their willingness to play games’ (Cohen, 1993:169) – something our city now needs to change to accommodate.

Play is characteristically spontaneous and changing, and so needs a flexible space in which to exist. As Brown (2010: 18) notes ‘Another hallmark of play is that it has improvisational potential. We aren’t locked into a rigid way of doing things,’ meaning new ways to play are constantly being created and explored. In order for play to remain enjoyable it has to retain people’s interest: changing play situations are the best way to achieve this. As Stevens suggests ‘planning might also consider that design is never finished…..so design policy needs to consider how to best provide the possibility of ongoing alterations to public open spaces and their programmes’ (Stevens, 2007:203).

The Playful City is within our reach. Through better understanding of play we can create a more playful city. This knowledge and understanding needs to be feed into both how and what cities physically provide for play, and also into in how both the citizens and government think about play ‘The architecture of tomorrow will be a means of modifying present conceptions of time and space. It will be both a means of knowledge and a means of action’ (Knabb, 2006: 3). Understanding the importance of play to the city and human beings; it is fair to say that in solving the ‘problem’ of play in our cities, we will go long way to solving many of the other problems of the city.

As the great philosopher Plato once said ‘Life must be lived as play’ (Wikiquote, 2012).

Carma Masson BA(Hons). PGDip. ARB. is Owner of playground, a multidisciplinary design studio based in Manchester, focused on designing playful, engaging and memorable spaces and places for people within the city. In addition to her work in practice, Carma is an Associate Lecturer in Interior Design and Architecture at both Sheffield Hallam University and Manchester Metropolitan University, having previously lead a studio at London Metropolitan University.