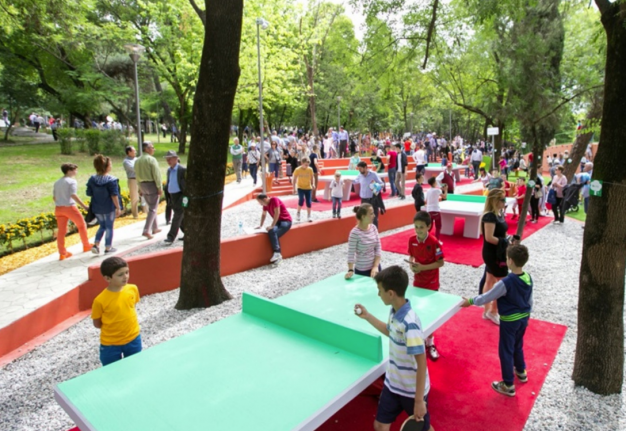 A whole new approach towards the concept of ‘children’s space’ in urban environments was one of the highlights of the Cities on the Rise event in the Irish city of Cork.

It was held by the Academy of Urbanism, a non-profit body which brings together the current and next generation of urban leaders, thinkers and practitioners, and uses its wide network to share examples of what it calls ‘good urbanism’.

Its annual congress examines the vital role played by cities in national economies and culture and how, through a combination of innovation and investment, they are becoming places where people – not least children and families – want to be.

This year’s event used Cork as its host city, helping to highlight how it and other similar mid-level non-capital cities across Europe such as Marseille, Rotterdam and Aarhuis are being transformed through the realisation of new ways of thinking about urbanism and how it can relate to the needs of children in cities.

Among the presentations and workshops featured was Cities Alive: Designing for Urban Childhoods, delivered by Timothy Duin, an urban planner, and Samuel Williams, a landscape architect. Both are from the Arup Group, a London-based engineering and design firm which co-sponsored the congress. The pair’s session was all about proposing a child-friendly approach to urban planning, while at the same time helping to build successful cities that work for everyone.

They believe that creating urban environments that offer streets, spaces and nature – for all ages, abilities and backgrounds to enjoy together – can make a vital contribution to our collective wellbeing. And with children projected to make up the majority of the world’s urban population by 2030, the quality of life experienced in cities will in many ways determine our global future.

“By 2030, the majority of the world’s urban population will be children,” said Duin. “By considering children’s perspectives when planning urban areas, we can design cities that meet our needs now and into the future. We need to design spaces for all ages, abilities and backgrounds to enjoy together.”

Samuel Williams added: “The amount of time children spend playing outdoors, their ability to get around independently, and their level of contact with nature are strong indicators of how a city is performing, not just for children, but for all generations of city dwellers. A child-friendly approach to urban planning is a vital part of creating inclusive cities that work better for everyone.”

The workshops’ key messages were that designing for urban childhoods must be integrated into everyday planning and not just confined to the dedicated development of play spaces or parts of parks. Cities will also, through designing better environments for everyday play, be successfully designing better, more resilient, liveable and healthier environments for all its citizens. The need for more risk-taking in design spaces and more imaginative approaches was also emphasised.

Organisers also encouraged participants to share their own examples of good practice by emailing urbanchildhoods@arup.com or on social media via the hashtag #urbanchild