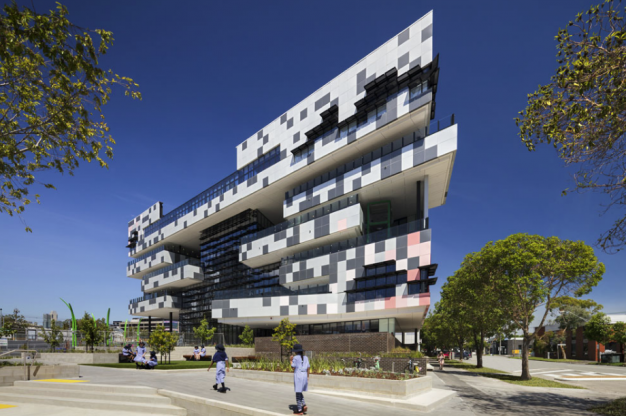 The rise of the vertical school

Rising to six storeys, South Melbourne Primary is the first high-rise school in the south eastern state of Victoria, having opened for business at the start of this school year. Its innovative design has made it a reference point for so-called ‘vertical schools’ across Australia.

Richard Leonard is the Director of Hayball, the architecture firm behind the school, and he stresses that vertical schools should be seen within the context of the rise of ‘smart cities’ in general.

“We’re now seeing cities really attempting to provide a more holistic lifestyle, a stronger emphasis on the human capital and social capital, ICT infrastructure and being more sustainable,” he told Teacher Magazine. “I think that’s really the context for the inner city school and how you’ve got to conceive and design for them.’

As a finalist in in the Future Project of the Year Award at the 2016 World Architecture Festival Awards, South Melbourne Primary has, by addressing its physical location, challenged traditional perceptions of how a school should look and what it needs to be. In a move away from the traditional classroom environment, the school’s key innovation is, according to Hayball, the ‘unprecedented integration’ of shared school and community facilities.

As well as a being a state school for 525 students, the project includes an early learning centre, maternal and child health centre, multi-purpose community rooms and indoor and outdoor multi-purpose sports courts. Hayball is also working with the City of Port Phillip to deliver streetscape  and public realm works for the Ferrars Street Education and Community Precinct.

This is a project integrated with the school design to deliver community infrastructure and improve accessibility and connectivity – including pedestrian, cyclist and public transport access –  which is vital for the successful operation of the school.

A virtual tour of South Melbourne Primary School is available on YouTube.