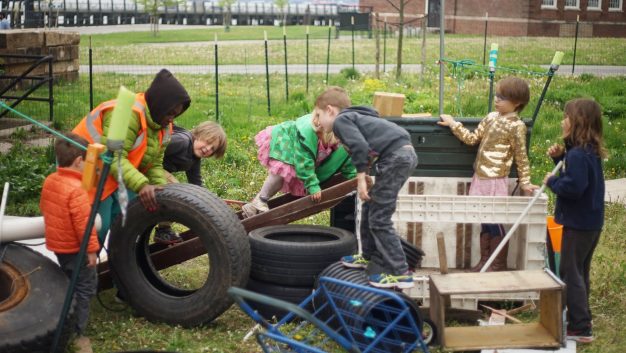 When it comes to planning new city infrastructures, children’s needs are still being ignored. Worse still, they are being pampered with ‘risk-averse’ thinking. But acclaimed child play expert Tim Gill’s belief that things are changing offers a tantalising a glimpse of what is possible. The opening keynote speaker for Child in the City World Conference 2018 has plenty to say.

An acclaimed advocate and consultant on childhood issues, Gill focuses on the changing nature of children’s play and free time. He has written extensively about the need for the integration of child-friendly policies into urban planning and design.

He’s also a passionate opponent of the ‘zero-risk’ mindset which over the years has crept into play planning policies, believing that not letting children get into the sort of tree-climbing scrapes that their parents experienced is doing nothing to prepare them for the travails of later life.

City planners, he believes, need to be doing more to reverse this trend, and also give children more choice of activities and safe options for getting around.

“Child friendliness is partly a matter of respect for children’s rights, and their health and well-being,” says Gill. “But what is distinctive about a child-friendly city is that children are active and visible in the streets, parks and public spaces of the urban fabric. So my definition has two components. First, children have children have lots of choice about their play and free time. And second, they enjoy a high degree of everyday freedom – by which I mean the freedom to get around, explore and meet with their friends on foot or by bicycle or public transport.

This definition of a truly ‘child-friendly’ city is based, he says, on the work of the Finnish academic Marketta Kytta, whose twin central criteria of a child-friendly environment – diversity and access – dovetails with much of Gill’s thinking.

So does he believe that city and municipality planners have failed children?

“Yes. Urban planning is partly about setting and enforcing the rules of a constant battle for public space,” he says. “And for most of our recent history, planners have ruled decisively in favour of cars, not children. Transport planners especially have tended to ignore children – or worse, see them as nuisances or unpredictable creatures who need to be under constant parental supervision. But this is beginning to change, at least in some high-income countries.”

Gill has also written previously about how the 1980s and 1990s brought the era of ‘zero-risk childhood’. But he’s confident that, after years of lobbying, society has begun to realise that in seeking to protect children, it has become too risk-averse over children’s freedoms, and that now the tide is turning, not least in his native country.

“Here in the UK we have built a new paradigm for play safety in the form of risk benefit assessment (something he can rightly take credit for helping devise) and some genuinely exciting playgrounds,” he says. “Around the world, health experts and decision-makers are becoming more interested in children’s everyday freedoms. Growing numbers of parents are trying to support their children to expand their horizons – just look at the support for play streets and outdoor kindergartens.

“We have even seen accident prevention charities calling for a balanced approach to risk, but more needs to be done,” says Gill. This is something he also makes clear in his latest report for the Bernard van Leer Foundation, a global non-profit body which creates opportunities for children in disadvantaged areas.

But he remains frustrated at the attitude of many city planning departments: “Municipalities, in particular, are still prone to excessive risk aversion, as shown by the global proliferation of dull, identikit playgrounds.” Asked what he sees as the most important questions that policymakers should be asking before mapping out their city’s future, Gill is quick to paraphrase a statement from Enrique Peñalosa, the Mayor of Bogota: “Do you want to build a city for people or for cars?”

But any students of planning policy history know that municipalities saying they will do one thing and actually delivering on that promise, be it for economic or political reasons, is a well-trodden path. Thus Gill is concerned that some cities can give the impression that they are indeed redesigning their infrastructure with children’s needs at the forefront, and thinking about the bigger picture in terms of making a lasting difference, when in reality they are paying little more than lip service to such considerations.

“I am worried that some participatory initiatives that aim to support child-friendly cities are little more than public relations exercises,” he says. “A much stronger focus is needed on outcomes, rather than processes, on decisions that make a positive difference to the everyday lives of large numbers of children.”

Gill points to the fact it is almost 50 years since the leading urban thinker Kevin Lynch first set up the Growing Up in Cities programme for UNESCO: “It should really be a wake-up call for the children’s participation movement when leading academics say that progress has been ‘glacial’.

“And while national leaders could, in theory, take more of a formal lead in influencing and driving local child-friendly planning policies”, Gill strongly believes that the real solutions are to be found at the local level.

“Of course, central government can play a role, with funding as well as legislation, but from my experience around the world, it is city leaders who hold the key,” adds Gill. Much of this thinking was gleaned from his Churchill Fellowship research, which saw him visit cities across Northern Europe and Canada too, in his own words, ‘get under the skin’ of local thinking. He will be sharing some of these experiences and exploring the lessons learned when he speaks on day two of Child in the City World Conference this September.

“They have the policy tools, they run the main local services like parks, schools, planning and transport, and they are closer to the adults whose support is crucial, such as NGOs, community groups and, of course, the voters,” says Gill.

He points to the successful example of Rotterdam, a city effectively razed to the ground during the Second World War, and therefore well-versed in literally having to start again. Its post-war reconstruction followed a car-oriented path – a very un-Dutch approach perhaps given the country’s image today as a haven for safe cycling – that was not seriously challenged until late in the 20th century. When, in 2006, it was labelled the worse Dutch city to raise a child, the authorities knew things had to change.

Cue a massive EU-backed modernisation programme designed, among other things, to make school yards and public areas greener and improve walking and cycling infrastructure. It even saw parking areas converted into playgrounds. “I saw several streets in different parts of the city that had clearly been redesigned along these lines, losing around half their parking places in the process,” Gill recalls of his time there.

Similar projects have also been undertaken in cities like Bogota, under the leadership of the aforementioned Enrique Peñalosa, and the Albanian capital Tirana, thanks to the vision of Mayor Erion Veliaj.

Gill draws special attention however to another outstanding example of a city which has successfully gone back to the drawing board for one ambitious project: “As a model child-friendly neighbourhood, Vauban in Freiburg, Germany, is hard to beat. It was built in the 1990s/2000s as an exemplar car-free, sustainable city district. It was partly inspired by a big research project into children’s outdoor play and mobility which was led by the late Professor Baldo Blinkert. His keynote at the Child in the City Conference in 2004 has had a lasting influence on my work.

“When I last visited in March this year, children were everywhere; cycling around, messing about in the drainage ditch by the street market, climbing trees and playing in the playful green spaces with family and friends,” says Gill. These images and memories perhaps provide the best definition possible of his assertion that outdoor children are the true ‘indicator species’ of any city.

So how does he think municipal policymakers can best work with stakeholders to set out a feasible blueprint for ensuring child-friendly cities deliver the economic, cultural, health and social benefits for society?

“I’d like to see planners – and politicians who employ them – take a moral lead in making the case for sustainable, equitable, healthy urban environments,” he says. “Bringing children into the picture – asking what cities are like from their point of view – can help with this. Thinking about children’s lives invites adults to focus on the long term, and on their hopes and dreams for communities as a whole. Hence it helps take people beyond their narrow, short-term interests.”

“Of course, short-termism is hard to counter, especially for politicians, who are so conscious of the political cycle. But I really think that progressive urban leaders who do not talk about children are missing a trick, and ignoring what should be a key foundation for their arguments.”

Gill’s appearance will undoubtedly be one of the highlights of year Child in the City World Conference, and he is looking forward to helping ensure that, in some small way, it can help make a tangible difference to future planning.

“I’ve been to every single Child in the City, its strength has always been the diversity of disciplines and geographical backgrounds of speakers and delegates,” he adds. “What do I look for? Three things: new, inspiring, thought-provoking content; space and time for debate and discussion; and a sense of being part of a wider movement.”

And if there was one key message that Tim Gill would like the audience to take away from his appearance?

“Our best bet for making cities around the world for better children – and hence for everyone is to join forces with progressive urban thinkers and decision-makers, and to learn from what leading cities have done.”

Could you please credit the photo attached to this post to play:groundNYC.

Thank you Reiley for your comment. We have updated the photo credit.