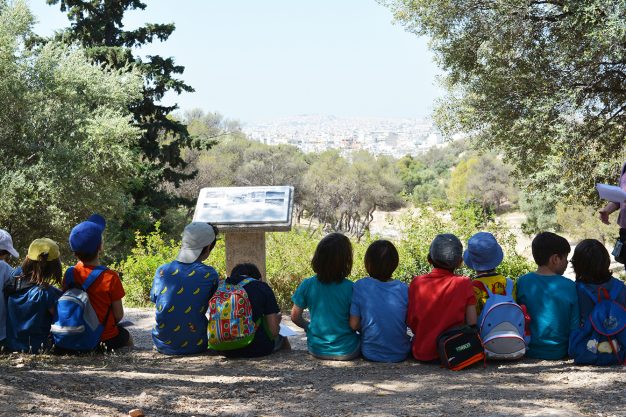 The city of Athens as learning environment and field of action

Natalia Bazaiou and Anastasia Noukaki live and practice architecture in Athens. Together they run architecture and city workshops for children focusing on their relationship with the urban environment using participatory design methods. In this special article for Child in the City, they share how their work helps connect children to their city.

The commute to and from school is a basic tool by means of which children may understand the city. In the eyes of children, it may become a magnificent journey of observation and adventure. These itineraries lay down the foundations of their topographical memory and determine the archetypes and symbols by which they will go on to interpret the course their own life follows in the world. ‘The child has not acquired yet that selective vision that distinguishes the beauty of the flowers from that of the weeds,’ writes Colin Ward in his book The Child in the City[i]. Their gaze, unfettered by prejudice and stereotypes, is open to all sorts of possibilities.

Children and the city

According to French psychoanalyst Françoise Dolto[ii], it is the child’s right to travel across the city on their own, as this provides the best possible training in being independent. It would be ideal for children’s lives in the city if they could experience it on their own through child-friendly circulation networks.

Such statements sound completely unrealistic today, at a time when it is difficult for children to experience the city without adult supervision even at the level of the neighborhood. In reality, the sprawling builtscape of Athens that is typically navigated by car renders a child’s urban experience a fragmentary one, which may have clear departure and arrival points but is all the same unsuited to establishing a sense of spatial continuity. The result is a loss of connectedness with the reality of the city as such and with the actual features of its specific physiognomy. One might say that despite the diversity of possibilities and opportunities to which the city exposes its residents, as a whole it tends to withhold those opportunities for self-growth that would once have given children their sense of identity, as Dolto claimed. And this, in essence, has a marginalizing and isolating effect that keeps one disconnected from the city as a learning environment.

It is a process that takes its toll on the building of personal identities since to find our place in the world that surrounds us we must first make sense of that world and invest it with meaning. The fact that children experience the city as a largely unfamiliar territory they are not connected to disempowers them and prevents them joining a conversation they have a right to participate in. Moreover, it only reinforces adult control over them.

The city is also put at a disadvantage because of this structure, as it misses out on the humanity with which children would invest its core structure and operation. To paraphrase Aldo Van Eyck, for the city to be a real city once again it must be put at the service of children. But children must also be put at the service of the city, we might add, since they alone are “endowed with such genuine understanding of the world as to allow them to identify the real problems and needs of people”[iii].

Connecting children to their city

The need to enable children to connect to their city and make them aware of the ongoing dialogue on urban issues is what motivated us to set up the architecture workshops for children. These workshops train children to look at the city with a keen and critical eye; to be inquisitive, vigilant and analytic in perceiving and understanding the urban environment. Children bring the element of experimentation to problem solving and come up with novel and unexpected approaches where emphasis is placed as much on the process as on the end result. They practise identifying issues, investigating, evaluating and expressing their ideas in either 3 or 4-dimensional proposals.

Rather than aiming to foster a generation of future architects, the process in question hopes to create responsible citizens that acknowledge the importance of public space and are actively concerned about it; indeed, to provide an antidote to the dominant sense of apathy, indifference or ignorance by which the built environment is treated today. Creating citizens that are not only actively interested in their world but also ready to go a step further by taking action[iv] presupposes an optimistic standpoint, a type of behaviour determined not by atavistic attachments but by the expectations we share regarding our present and future.

In terms of methodology, the goal of the architecture workshops is, first of all, to turn children’s attention to their immediate surroundings and to encourage them to consciously observe them by focusing on their private spaces and on routes across the city they are familiar with.

The second stage, which we consider to be a fundamental step in the process, is building up a trove of representational tools, seeing as the boundaries of children’s representational language determine those of their world of ideas. Because, as Nelson Goodman[v] would say, the world exists in as many ways as it can be described. In other words, there is a direct correlation between the representational means at our disposal and the information we can glean about the world. For this, we make use of a variety of media and systems of signification, such as aerial and on-the-ground photography, maps, mental maps, mapping techniques, collage, questionnaires, texts, constructions, illustration, not to mention encouraging a cross-disciplinary use of those tools.

At a third stage, having familiarised themselves with the process of observation and the use of expressive representational tools/media, children become aware of the power that a blend of different media affords them in generating new conditions and formulating new concepts and, by extension, in communicating these concepts to the world out there. Like play, which Julia Kristeva (1982: 32) describes as the fundamental vehicle available to children for transitioning from their own private universe to social space, art and its multiplicity of expressive means give children the possibility to interpret their immediate surroundings and, therefore, also that of re-interpreting them.

So, children learn to approach the city first through its representations. As soon as they’ve acquired a mental image of it, they can then master the ability to step in and suggest solutions, to conceive of and envision another city which directly concerns them, and which they can reference as much as be referenced by it. The immeasurable power of children’s imagination serves to deconstruct mainstream readings of the city; it appropriates and reassembles them, opening cracks in its normative character.

The possibility of expressing emotions and ideas in relation to the city by making use of a wide range of media offers an answer both to the monolithic discourse of conventional contemporary education and to the problematic and piecemeal ways in which children connect with the environment of the city. Architecture and art and their expressive media enable children to articulate their ideas and to communicate them effectively. Besides, as Adler[vi] maintains, man is fulfilled by serving society. It is crucial to aim at instilling in children the confidence that they can and should dream of another reality; moreover, that they should do so with the conviction that in their hands lies the power to shape a reality which is relevant to them, indeed to the benefit of the community; a community so wide as to include, and embrace, the whole of humanity.

[iv] According to A. Adler, this personality type is the epitome of psychological maturity. More on: Adler A. (2011). Social Interest: A Challenge to Mankind. Eastford CT: Martino Fine Books.

[vi] This is described as the socially useful type. Persons in this category are active and full of energy, characteristics that are in harmony with the needs of others and have a positive/beneficial effect on them. More on: Adler A. (2011). Social Interest: A Challenge to Mankind. Eastford CT: Martino Fine Books.