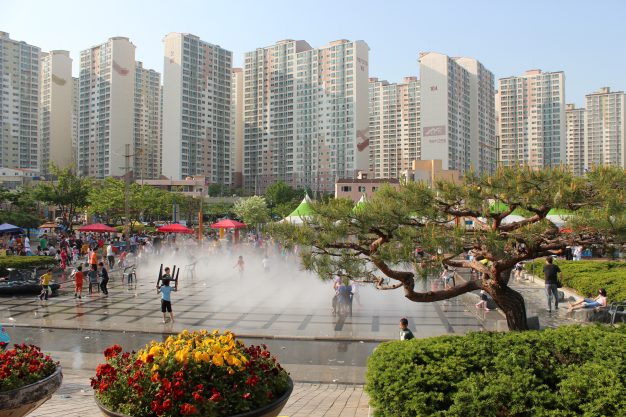 The cities of tomorrow must be built on strategies for energy-efficiency, clean transport and better waste management to ensure they are clean and safe for all who grow up, live and work there.

That’s the passionate view of Dr Maria Neira, World Health Organisation (WHO) Director for Public Health, Environment and Social Determinants of Health. She makes the observation that more than half of the world’s population live in a city, and by 2050 this is expected to be two-thirds.

People, she says, live in cities to be close to employment and educational opportunities and services, and cities can be wonderful places for social interaction and access to cultural activities.

“When cities are built using good planning principles, they can also be communities that foster health and well-being. Think of the cities or the neighborhoods that you have particularly enjoyed living in or visiting – and how such places looked, felt or even ‘smelt’.

“It is likely that these cities were full of people and life, with broad sidewalks and cycle lanes for easy, safe movement, an accessible public transport system and plenty of parks and green spaces, where people of all ages could exercise.”

But, she adds, too many of today’s rapidly-growing cities are ‘beset’ with heavy traffic, cramped slums and anonymous high-rise blocks which breed social alienation, noise and violence’.

“All of these have a negative impact on our mental and physical health and well-being,” she adds.

“One of the best overall ‘indicators’ of a healthy or unhealthy city is air quality. This is because air pollution levels are typically low in well-planned cities with good transport systems, walkable streets and ample green spaces to filter the air. And air pollution levels soar in urban settings that prioritise road transport over pedestrians and cyclists, and that allow uncontrolled sprawl in large, grey, unbroken blocs of asphalt and concrete.”

More than 80 per cent of all cities exceed air quality limits set by the WHO, with more than half that monitor air pollution reporting air quality levels more than three times these limits. Air pollution – in Dr Neira’s words ‘an ‘insidious killer’ – is the cause of three million premature deaths every year. This is most prominent in the major cities of Asia, Africa and Latin America, all of which are heavily populated with families, often living in poverty.

“Air pollution is one of the most critical health threats we are facing today. Health and wellbeing MUST be the number one priority in urban planning,” says Dr Neira. “If we don’t take action now, air pollution will choke our cities and make them even more deadly places to live.

“Since most sources of outdoor air pollution are beyond the control of individuals, we must call on our city mayors and other local leaders to push for change and commit to tackling air pollution head on.

“But we can also lead change at community and individual level. This can include commitments to cycle or take public transport to work, when safe routes are available; to recycle waste or compost; or conserve water and energy at home and in the office. Strategies such as ‘pedibus’ initiatives can encourage children to walk to school safely, and the creation of urban gardens can provide both healthy foods and venues for social interaction and physical activity.

“Many of these measures to improve environmental health also help people to be more physically active and eat a healthier diet, so reducing obesity and diseases like diabetes and heart disease. We know that when cities take action to reduce air pollution, they can achieve dramatic progress. Almost half of all cities monitoring air pollution in high-income countries reduced air pollution levels by five per cent between 2008 and 2013.

“But we must move faster and with more urgency, particularly in low- and middle-income countries where progress on air pollution has not been so encouraging and the air quality is getting worse. We need to ensure that people know about the levels of air pollution in their city and that they understand its deadly impact on their health. This is the most effective way to trigger action.

“We all need to work together to make our cities healthier – and happier – places to live.”

The WHO has also joined forces with the United Nations Environment and the Climate & Clean Air Coalition on the BreatheLife campaign to give citizens access to this information and to mobilise cities to work together to achieve safe air quality levels by 2030. Dozens of cities including London, Oslo, Santiago, Seoul, Singapore and San Antonio have joined BreatheLife, and the network is constantly expanding.

In October WHO will host the first global conference on air pollution and health in Geneva. It will bring together government ministers, city mayors, health professionals, academics, activists and researchers to share knowledge and mobilise action for cleaner air and better health globally.

Dr Negria was writing in a commentary piece for WHO first published by NewCities.