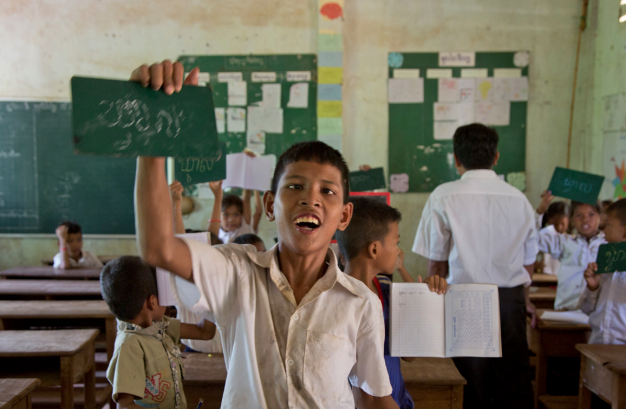 Schools give ‘shout out’ for disabled children

School pupils in The Netherlands have joined thousands more across the world in ‘making some noise’ about improving access to education for all children with disabilities.

‘We Ring the Bell’ (Wij trekken aan de bel) is organised by Liliane Fonds, a Dutch-based charity working to ensure children with disabilities in the world’s poorest regions have equal rights and access to education and opportunities.

Some 40 million children with disabilities live in the most deprived regions of Africa, Asia and Latin America, and not only are they often left behind in terms of education, but are also frequently victims of neglect, abuse and violence.

‘We Ring the Bell’

On Wednesday March 21 around 1,600 schools in 30 countries took part in We Ring the Bell, the aim of which is to encourage pupils to come together in their own schoolyards and classrooms and make a noise. This took place before and after lessons or during breaks, and ranged from shouting to ringing bells to even playing musical instruments.

Liliane Fonds says that nine of 10 children with disabilities are not welcome at school, a shocking figure which goes against the very basic entitlement of education for every child. This right is enshrined in the United Nations Convention on the Rights of Person with Disabilities and the Rights of the Child and the World Goals by 2030.

The charity adds: “We want to make accessible education a reality in every country and that: all schools remove barriers to education; all children have access to equal opportunities; all parents can and have the courage to stand up for their children; all authorities ensure that the right to education for all children is respected.”

Now in its seventh year, the We Ring the Bell campaign has also been working for the past three years with schools in its partnership countries across Africa, Asia and Latin America. The Netherlands took the lead in Europe, with no fewer than 108,041 primary schools in 630 schools making a noise for one minute at the start of the school day.

Liliane Fonds also used the event to launch a worldwide manifesto with a simple message – making all children welcome at school. It is encouraging everyone to stand up for the rights of children with disabilities by signing the online manifesto at www.welcometoschool.org