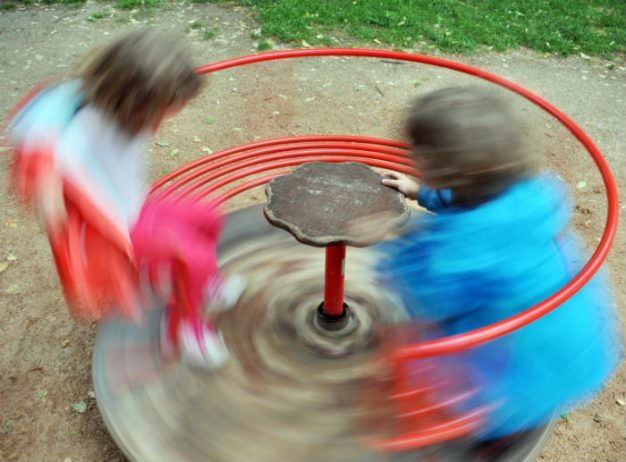 Playgrounds: danger or risk? Do you know the difference?

A top priority for those of us who create industry-leading playground safety surfacing is minimizing the risk of injury. However, that doesn’t mean we don’t understand the importance of active, adventurous playtime that allows kids to challenge themselves, discover their physical abilities, and develop their self-confidence.

It’s important that the people who design and build playgrounds understand that “danger” and “risk” are not the same thing. Whether we’re a parent or a parks administrator, it’s our job to eliminate the danger, and also to preserve the safe risk-taking that fosters creativity, challenge, and discovery.

Many children’s activities come with some risk of injury or accident. Sports, like swimming and soccer, come with a higher risk than playing on a playground — especially when the playgrounds use safety surface products to keep kids safe. Still, according to the Centers for Disease Control, 200,000 children under the age of 14 are injured on the playground each year. The dangers are real, and we must do everything we can to prevent these accidents from occurring. Modern play equipment design and regulations are making kids safer every year. Heavy metal swings, high “trapeze” rings, and rusty merry-go-rounds are a thing of the past, and no one is saying these dangerous playground features need to return.

However, let’s not forget about the “reward” that comes with a healthy level of risk. Playing outside (whether on a playground or in a team sport) helps kids develop, mentally and physically, and can also set them up for healthy habits as they become adults. A lack of outdoor activity means less movement and less interaction with other children. Behavioral issues, social difficulties, and developmental delays have all been connected to a lack of outdoor play. That’s why eliminating physical risk entirely can run a much greater emotional risk.

Are Americans too Risk-Averse?

In today’s litigious society, concerns about playground safety are linked with concerns about liability. Even if a school or community wanted to have a giant metal slide, rope swing, or big trampoline on its public playground, American Standard Testing Methods (ASTM) and Consumer Product Safety Commission(CPSC) guidelines would prohibit their use. Equipment manufacturers won’t sell them because they don’t want to increase the liability they would face in the event of an injury.

In Europe, however, public trampolines aren’t uncommon. Safety is enhanced by keeping them low to the ground and surrounding them with safety surfacing. They are usually small enough to discourage too many children from using them at once. Everything considered, there are no more injuries caused by trampoline use than by using any of the “safer” features in European parks.

In some cases, the overabundance of caution in America is due to a misinterpretation of safety data. Neither ASTM nor CPSC standards prohibit teeter-totters or merry-go-rounds, but schools and cities have been removing them from playgrounds for years due to a perception that “moving parts” create a danger to children. On the contrary, studies show that only three percent of all playground injuries involved moving equipment. Statistically, falling is a much more significant risk on the playground. Although, this danger is becoming smaller thanks to increased use of playground safety surface materials which are ASTM F-1292 compliant and meet all critical fall height standards and requirements.

Why Tolerate Any Risk at All?

Researchers from Iowa State University, North Carolina State University, and the University of Georgia collaborated to publish Making Room For Risk In Play Environments And Playground Standards. The authors argue that making playgrounds safer in the last couple of decades has also been “associated with a decline in creative, challenging, and exciting play.”

Risk-taking comes with a chance of injury. But did you know that risk helps kids develop gross motor skills that will help them reduce the potential for future harm? Balance and proprioception help kids feel more secure on their feet. Additionally, allowing children to engage in beneficial risk on the playground helps them learn to set safe limits on their behavior and evaluate potentially risky situations in the future better. Put another way, reasonable risk keeps kids engaged on physical and mental levels, teaching them the skills to better assess and negotiate challenging situations and obstacles on their own.

On the playground, danger is not the same as risk. Eliminating all risk within play runs the possibility of removing creativity, challenge, and discovery. Furthermore, risk-taking opportunities on the playground can benefit a child’s health and learning in all the following ways:

1 comment op “Playgrounds: danger or risk? Do you know the difference?”

Thank you for sharing our paper and for writing this article.
Bambi Yost, Iowa State University