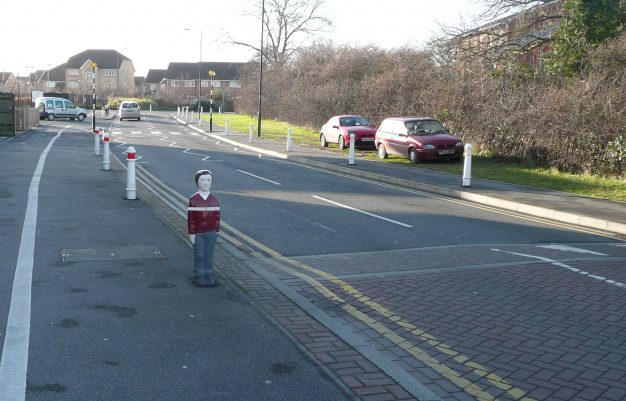 In this first of a two part essay, transport consultant Lucy Marstrand questions why the problems associated with increased motor traffic, despite being well-documented since the 1970s, are still not being addressed by the highways engineers who design and build our roads.

The seminal report One False Move by Mayer Hillman et al (1990) demonstrated that the increase in personal freedom and choice arising from widening car ownership had been gained at the cost of a loss of independence, play territory and choice for children. The insidious swamping of residential streets with traffic has long been known to have a profound effect on our freedom and quality of life. Appleyard and Lintell’s 1969 research on traffic and neighbourhood social interaction found that as traffic increases people socialise less with their neighbours. They are less likely to form friendships and stress levels rise. This study was replicated in 2011 by Hart and Parkhurst who found that traffic had a particularly detrimental impact on the degree of independence granted to children.

Why are practitioners still failing to resolve these issues despite the problems being documented since the 1970s? Engineers may believe they are today providing for people other than car travellers by ‘compromising’ capacity to create crossings and ‘if there’s space’ cycle lanes. But the fact remains: our most vulnerable citizens – children – are not free to walk and cycle independently on most roads. Women favour segregated cycle facilities, particularly if they are accompanying children, and children of course depend on walking, scooting or cycling to get about independently.

A lack of crossings and protected cycle routes, and the dominance of high-speed, hostile, overly-engineered road environments therefore disproportionately limit the lives and travel needs of children, the disabled, and of women – who are less likely to hold a driving licence or have access to a car than men, and more likely to be trying to get children from A to B.

Warnings to parents and children, not motorists

The title of Hillman’s seminal study was cribbed from a 1980s Government road safety campaign poster ‘One false move and you’re dead’ – a warning to children, and no doubt their mothers, that they must rein in their movements or risk being killed. Note that no such demand is made on the motorist who poses the danger.

Many engineering techniques enshrine this ethos, ensuring the most vulnerable submit to the motorist: generous splays undermine pedestrian priority at side roads; convoluted staggers and pedestrian stages are fitted in around motor capacity requirements; railings corral pedestrians away from desire lines; multi-lane roundabouts lack crossings because ‘it’s not safe to cross’. Modal filters and ‘Woonerven’ (not the weaker UK “Home Zones”) remain the exception, not the norm, on residential roads. Mention of continuous footways, light segregation or concepts such as traffic evaporation can still be met with blank looks or baffled disbelief by senior transport practitioners.

Part of the problem lies with the training and culture of highways engineering. The expectation that children might cycle or play outside has been eroded out of the common imagination by engineered roads and associated road hierarchies and their inherent bias towards motor traffic. As noted by Culver, “Traffic engineering has long been understood as crucial for the (re)production and hegemony of automobility” (A bridge too far, 2015).