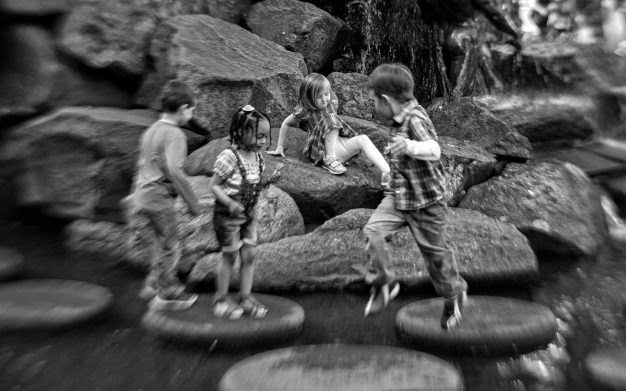 A new study from Norway has found clear associations between the extent of children’s outdoor play and their ability to make progress in school. Monica Arkin of Child Trends discusses the significance of the findings.

Although outdoor play for children may be more prevalent during summer, spending free time outside can particularly benefit a child’s development when pursued year-round. For parents and educators, hours spent outside shouldn’t be seen as a detraction from time that could be spent on schoolwork. Rather, outdoor play should be recognized not just as a treat reserved for summertime, but as a full-time staple of healthy development throughout the school year.

In addition to its more commonly known health benefits, outdoor play in childhood is also associated with many soft skills that are important for school success, such as executive functioning. Executive functioning is defined as a set of mental processes that enable us to plan, prioritize, focus attention, filter distractions, and more. These skills are important assets for learning in preschool, elementary school, and beyond.

A recent study from Norway looked at the associations between time spent outdoors during child care and executive functioning. Among children ages 4 through 7, those who spent more time outside during child care performed better on an executive function assessment and showed fewer inattention-hyperactivity symptoms. Further, numerous studies[1] have found that playful engagement with nature in kids under age 12 was linked with improved mental health and emotional regulation. (“Playful engagement” consists of open-ended, child-directed experiences such as free play, exploration, and child-initiated learning, in contrast to externally directed activities, such as school gardening projects and adult-led field trips).

These findings were consistent among both children with Attention Deficit Hyperactivity Disorder (ADHD) and those without diagnosed ADHD. As many parents and teachers know, these soft skills are important players in children’s classroom success.

Through the opportunities it affords for unstructured play and exploration, time spent outside also allows children to develop self-directed control, such as decision-making and planning skills. A 2014 study looked specifically at the benefits of unstructured play in children ages 6 to 7—voluntary leisure activities without formal rules or direction from adults (both indoors and out). It found that time spent in less-structured activities was associated with higher scores on a task that measured children’s abilities to plan and strategize to reach a goal without adult guidance.

The association remained even when controlling for age, verbal ability, and household income.[2] The authors felt this was likely due to the fact that unstructured play like camping, biking, and swimming allows children to explore, and to practice setting and accomplishing tasks on their own. These executive functioning skills are helpful for students as they learn to plan and prioritize schoolwork with less guidance from parents and teachers.

As we progress through another school year, let’s hope for a year of academic success and learning that occurs both inside the classroom and outside in nature.

[1] The 61 evaluative and/or empirical studies included in this literature review feature diverse samples of children across age ranges, socioeconomic background, cultural background, and nationality. However, data were not disaggregated to investigate the relationship between gender, race, or ethnicity and the findings.

[2] Although we expect that these findings would hold for all children, further analysis is needed to determine whether there are differences between racial and ethnic subgroups.