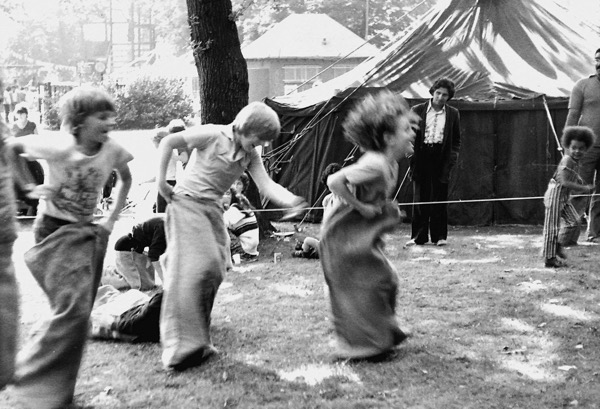 Landscape architect Maisie Rowe continues her journey into the memories of a rich childhood spent on an adventure playground in inner London’s Camden Square, vividly revived by the discovered photographs of her playworker, Abdul Chowdry.

In 1971, in a remarkable demonstration of community support, 943 local people petitioned Camden Council for a play centre. Architects drew up plans for a hut, which was formed of two shipping containers, and an adventure play area, made from reclaimed railway sleepers and telegraph poles.

Children were drawn to the Square by curiosity about what might be happening there that day. Even though it had initially been built by the council, the Square belonged to us: we were always doing things to it with wood and rope and string and paint or burning bits of it. Abdul remembers going to the British Rug Company for carpet off-cuts that we used ‘for swings and other things’.

There was usually a big fire smouldering away and we played endless games of ‘Bordering’, in which four or five children jump onto the swinging rope one by one, before dropping exhausted into the big cargo net. The knot in this rope was a mysterious lumpen object that evolved as things were added into it. There were arts and crafts going on; in my diary, my nine year-old self recorded winning a painting competition.

It is common to overlook the predominantly sociable nature of play but, at the Square, our play was all about hanging out – the highs and lows of friendships, conflicts, laughs, romances and drama. Sharon Sparkes, who played there in the 1970s, says: ‘There were four age groups and we all got on really well. Seldom were there fights or arguments. We always had each other’s back. The older lot looked after the younger lot, like a family’. Abdul’s pictures show older children holding babies or helping toddlers with toileting. ‘It was fun,’ says Abdul. ‘The whole notion of enjoyment was there.’

our play was all about hanging out – the highs and lows of friendships, conflicts, laughs, romances and drama.

Resuscitated memories testified to the forensic quality of children’s attention to the details of their environment and the stories that often attach to these details. For example, there was a mysterious concrete plinth which we lit fires on and incorporated into our play. It turned out to be the plinth of the hut made famous by Cat Stevens which, being made of wood, had inevitably been burnt down.

The playground’s fences told other stories. The main gate was in a very inconvenient location and children were always scrambling over the tall fence to get to the sweet shop, until the day that someone cut through a fence bar 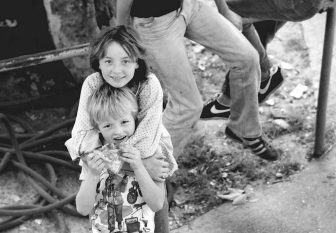 and bent it aside to make a little back door for the children. Sharon Sparkes says: ‘There used to be spikes on the fences but Martin Connelly slipped and fell on them, when he was trying to climb the tree in the corner, and caught his armpit so all the spikes got cut off’.

I remember feeling empowered by this kind of child-centred manipulation of the fabric of the Square. And the little story of the gate remains embedded in the landscape: when the playground reopened in the 1990s, the main entrance had been relocated to the spot where we’d made our hole in the fence.

The Square may have been an urban project but great value was placed on camps and trips to the seaside, a reaction against the city that underscored the relationship with land and landscape that was at the root of the project. Abdul captured images of skinny city kids buried in sand, running wild in the hills and stick-fighting in the forest. It was hard work for the adults, who improvised and made do: rain-drenched children are pictured wearing bin-bags with head and arm-holes cut into them.