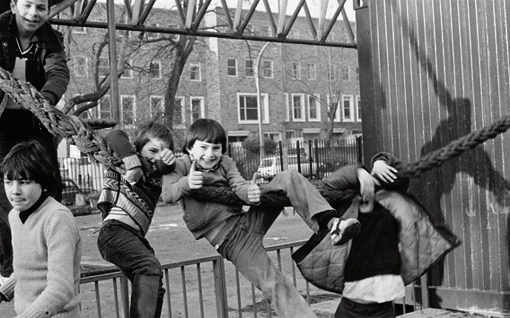 In this third part of her evocative essay about the Camden Square adventure playground where she played as a child, the writer and activist Maisie Rowe reflects on the seriousness of play for children, and its vital relationship with their landscape.

Today, playgrounds are often designed to cosmetic-ally resemble the adventure playgrounds of old, but the world has moved on and although genuine adventure playgrounds can still be found, it is hard to see how a project like the Square could be authentically replicated on a large scale. For one thing, children were given greater freedom and independence; they went to the Square without their parents and came and went as they pleased.

‘It was an area they could go to feel safe. A sanctuary.’

Abdul says: ‘You worked with them all. You didn’t exclude anybody. We were a stabilizing influence for quite a lot of folk. We could keep them in check.’ In the mornings, Abdul frequently found that children had slept the night in the Square: ‘It was an area they could go to feel safe. A sanctuary.’ The children’s perception of this landscape as a refuge was invoked by the name they gave to the playground’s highest platform, a good twelve metres from the ground, which they called the Flood Level. 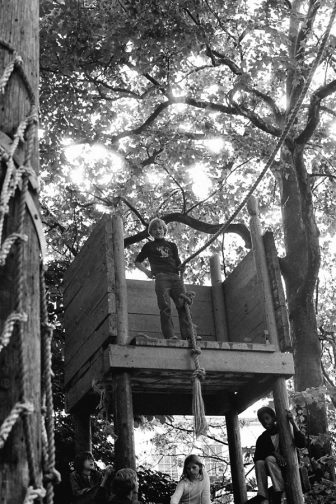 Being neither voters nor consumers, children are essentially powerless but our generation of Camden children benefitted from a progressive commitment to play, which the council promoted as ‘a child’s form of work’. The Square existed in a bubble of naive optimism and anarchic enthusiasm. Architecture students and activists were going into the inner cities and starting playgrounds, farms and arts projects, a radical counter-culture which counted children within its constituency.

A screen-printed poster made for the Square perfectly captures its inclusive character and the messy and colourful exuberance of its festivals, which were legendary: Abdul’s photographs record donkey rides, steel bands, face painting, candyfloss, sack races and a huge beer tent. Pete Townshend played at festivals and members of Madness often dropped by.

Sadly, I uncovered a deadly reminder that play is a serious business, indeed, a matter of life and death. If Camden Town gave us fashion and music, Kings Cross brought us drugs and crime. For the area’s youngsters, trouble was never going to be hard to find. It was devastating to learn that at least ten children who played in the Square did not survive their early years.

In a community that has known tragedy, the play leaders’ wisdom and compassion are remembered to this day. Sharon Sparkes says: ‘The play leaders had such a big influence on us, as we grew older. Even those that went astray. They tried their best.’

… we would do well to frame landscape itself as part of the infrastructure of childhood.

These anecdotes and memories attest repeatedly to the significance of landscape to the condition of childhood, to the intimacy with which children interact with landscape in the guise of play. Beach, park, garden, playground, forest. Climbing, hiding, seeking, sandcastles, dens, mud, fires, sticks, swimming, running.

Beyond the confines of the internet, very little play is possible without some kind of engagement with the landscape outside your skin. If we are talking about landscape as infrastructure, we would do well to frame landscape itself as part of the infrastructure of childhood. It is problematic how little this is talked about within the profession.