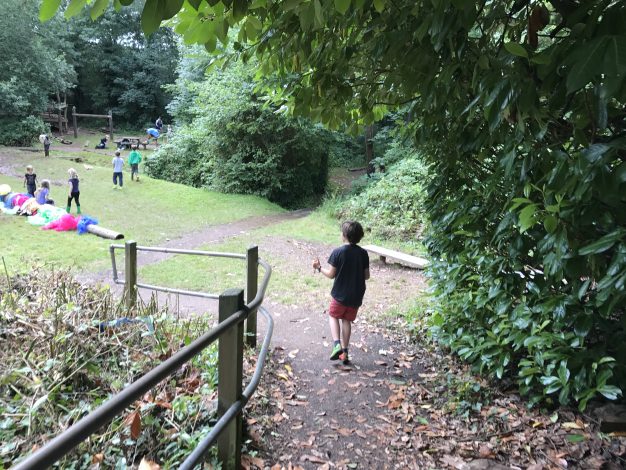 For children, playing is the adventure

A new pilot project in England, funded by the government sponsored national sports agency, aims to use ‘play as a springboard into sport’. In this first of a two-part blog, Adrian Voce explains why such support is a mixed blessing.

The announcement earlier this summer, by Play England and partners, of their new Sport England funded pilot project, Adventure into Sport – ‘using play as a springboard into sport’ – has been met with some mixed reactions from play professionals.

On the one hand, some much-needed resources for children’s play services are overdue. The sector has suffered a major downturn since the peak years of 2004-10 (Voce, 2015) and, although no longer monitored since the coalition government abandoned the national play strategy in 2010, there is plenty of evidence that both staffed adventure playgrounds and unstaffed play areas have been badly hit by austerity – with more cuts still to come (Children and Young People Now, 2017).

Play England itself has been as badly affected as many front line services, with the absence of a government play policy in England making it very difficult for the national body to secure substantial or sustainable funding to replace the central contracts it lost in 2010. Few will begrudge either they or their partners the opportunity this project represents: to survive another year in a difficult climate.

On the other hand, the implication that play provision is only worthy of funding if it can demonstrate how it is a gateway to children’s participation in sport, will be a bitter pill to swallow for play advocates. Adventure playgrounds (the focus of this project), in particular, have been at the cutting edge of playwork since the practice was first conceived and this new initiative will seem like a retrogressive step to many in the field.

It is true that all sport begins with play. Hand-eye coordination, gross motor skills and physical prowess are each developed by children from infancy upwards through their instinctive, playful engagement with the world. Equally, toddlers and pre-schoolers first develop their love of games, taking risks and rising to challenges when they are allowed the space to play.

The benefits of play to children’s health and wellbeing are well documented (Lester and Russell, 2008); not least in the way that it is a vital contributor to their physical activity levels (Department of Health, 2011). Given its ubiquity, the exact causal relationship is difficult to prove, but there is no doubt that children given enough space and opportunity to play are much more likely to be fit and able to enjoy sport than those who do not (Lester and Russell, 2008).

However, seconding children’s play to the supposedly more important outcome of their engagement in sport and physical activity overlooks that playing for its own sake is a child’s right. It may also have the effect of perverting or ‘adulterating’ – at a policy level – what is a deeply instinctive set of behaviours. Children’s play does not conform to adult norms. Only a small number of the recognised play types (Hughes, 2002), for example, could be described as necessarily ‘energetic’ or physically active. Privileging these over others is to interfere with a complex evolutionary process (Burghardt, 2005).

The second part of this blog can be read here

3 comments op “For children, playing is the adventure”

Play England began as the National Voluntary Council for Children’s Play, an initiative of Fair Play for Children, which brought together a range of NGOs with an interest in Play. It deviated from that by becoming an executive organisation and the liaison function died. It was the first “quango” to have its funding axed by the Coalition. So much for the progress made which was based on the notion that we have to do more to convince govt/MPs of the value of Play and it will get support lol

Play is now ‘somewhere’ within the DDCMS, along with Youth (but not same Minister?) and totally disregarded. The Sport/Play tie-in seems to me the aptest comment that over 3 decades of effort to persuade ‘decision-makers’ that Play is Important to the extent of realising the aspiration of Article 31.2 of the UNCRC has failed. We are in a worse situation than for years. We kid ourselves that nature play, playwork qualification etc are the ‘issues of the day’ until the next one. Meanwhile ….

….kids are able to play less and less near their homes on a daily basis, the parked car rules the residential street. Even the street play movement relies on ‘organisation’ and whilst achieving good things, falls far short of the child’s need to play freely. The field needs to come together to get its priorities right, based on A31, we need to look at GC 17 and also s508 and s507(a) and (b) of the 1996 Education Act using all this to MAKE Govt and LEAs wake up to their legal responsibilities