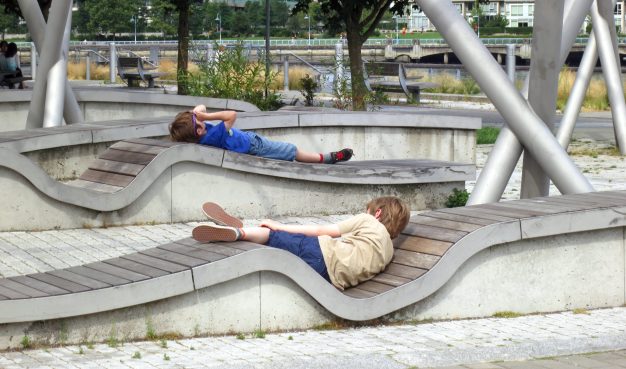 In this second part of her article about housing co-operatives in Vancouver, urbanist Jillian Glover discovers that co-ops have a rich community spirit – giving rise to a very high demand from families with children.

When visiting a co-op housing development, the strong sense of community is palpable. I met Yuri Artibise recently for a tour of the Athlete’s Village Housing Co-op, where I was welcomed into a large, open lobby with a colourful collage of paintings, each one created by its residents. 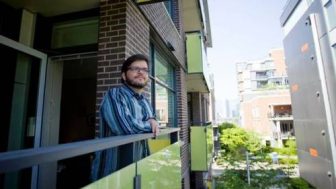 “The walls were filling up with art from all of the children here, so we decided to have residents provide one work of art and create a collage,” Yuri told me, “Our lobby is always busy. It serves as a community space and is usually full of kids playing, especially on rainy days.”

The building’s other shared spaces include a rooftop garden, library, art room, onsite daycare and a courtyard playground. These gathering places form the heart of the community for residents, who organized 131 events in 2016 (including books clubs, clothing swaps, a garden harvest potluck, family movie nights, a kids camp out, yoga classes, and a ukulele circle).

This may be a bit much for some, but it’s perfect for many young families and people looking for a close-knit community. “For five years I lived in a high-rise in downtown Vancouver and I don’t think I ever got to know even one of my neighbours,” says resident Natasha Coulter. “I have met just about everybody in this co-op in the eight months I’ve lived here.”

“You need to want to be part of a community,” says Yuri. “I’ve heard in other co-ops that some members find the governance structure can be a bit restrictive, but I like the shared decision-making and community cooperation.” 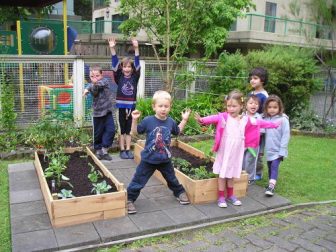 The co-op is located in the heart of Vancouver’s Olympic Village, so residents have access to a walkable, bankable new community along the city’s seawall with public transit, shops and services all within a 5-10 minute walk. The 1970s to the early 1990s were a period of rapid growth for Canada’s housing co-ops.

Most co-ops built during this period were under government social housing programs targeted to people with low to moderate incomes. The legacy of those programs remains: there are 91,846 homes in 2,220 co-operative associations across the nation, according to the Co-operative Housing Federation of Canada.

Today, the future of co-op housing in Canada is uncertain. By 2020, Canada Mortgage and Housing Corporation will have ended its agreements and rental subsidies with co-ops (about 55,000 units across the country). That means low and fixed-income residents — many seniors, single parents, people with disabilities, and new Canadians — will no longer be subsidised.