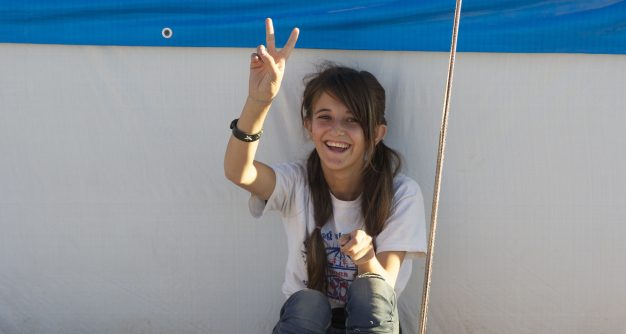 Published on 27-07-2017 at 15:12
At a symposium of the EU Agency for Fundamental Rights (FRA) last month, children spoke up for human rights, calling for Europe to do more to protect those most in need.

Children have expressed concern about the challenge of protecting human rights and questioned whether the EU is doing enough. At a symposium of the European Union Agency for Fundamental Rights (FRA) on 28 June they joined a panel of experts to put forward practical suggestions around issues such as migration and poverty.

The children speaking at the event expressed their shock that 1 in 4 children in the EU are at risk of poverty or social exclusion and that these figures receive so little attention. They stressed the need for action to allow children to not just have access to basic rights such as education, but to also have support to enjoy normal childhoods, such as socialising and going out with friends. They stressed the importance of child participation and of free education for all, including supporting material such as textbooks. One key issue for the group was children’s entitlement to be informed about their rights in ways that they can understand.

A helping hand to refugee children

The children at the symposium also urged that, as children make up a third of EU asylum seekers, greater efforts to make migrant children feel safe and that society should do more to welcome asylum seekers. “Nationalism or hatred towards other nationalities or religions has no place in today’s society” they said. Ideas included creating or implementing initiatives in each member state of the EU enabling children and young people to meet and help refugee children to integrate.

The Maltese President Marie-Louise Coleiro Preca spoke of the need to “end the scourge of poverty and other inequalities within our European Union, as part of our commitment to secure the universal rights and freedoms of all.” FRA’s Director Michael O’Flaherty then outlined concrete action the EU and its Member States can take to systematically strengthen their efforts to protect fundamental rights. This included to know, refer to and use existing EU and international law. He reminded participants that respect for rights is not a question of good will but a legal obligation. He also underlined the importance of being as committed to human rights at home as we are abroad. Lastly he called for greater use of the robust expertise and data that FRA has to offer.

This need to strengthen rights protection was underlined by Kaia Iva, Estonia’s Minister of Social Protection. She said that although a lot has changed in recent years, throughout history our aspirations have remained the same: “the hope to live in a violence free safe world and provide the best opportunities for our children.”

It is time to stop talking and act now.

The symposium ‘Is Europe doing enough to protect fundamental rights?’ took stock of human rights developments in the EU over the last 10 years since the Agency has been created drawing on FRA’s annual flagship Fundamental Rights Report and its Opinions. It was hosted in cooperation with the Maltese Presidency of the Council of the EU with the support of Eurochild who helped ensure the children were actively involved in the discussions throughout the event.

The children there intervened during the panel debate giving statements and asking panellists pointed questions about what could be done to address issues related to migration and asylum, and poverty and social exclusion particularly from the children’s perspective. They reminded participants that children are not just for the future but also the present. As one child put it: “We have one mouth but two hands, so it is time to stop talking and act now.”

The European Union Agency for Fundamental Rights (FRA) is the EU’s centre of fundamental rights expertise. It is one of the EU’s decentralised agencies, set up to provide expert advice to the institutions of the EU and its member states on a range of issues. The FRA helps to ensure that the fundamental rights of people living in the EU are protected.