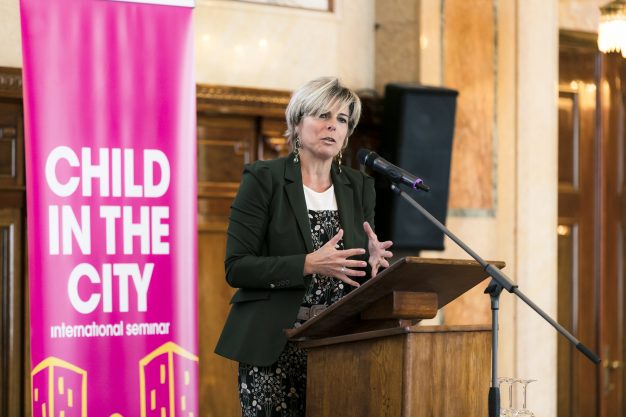 The first in a new series of Child in the City international seminars, held in Rotterdam this week was focused on the theme of Urban Planning and Children. It featured some thought provoking talks, discussions and field trips; and a very special keynote address: Princess Laurentien of the Netherlands.

In her keynote address to the first of Child in the City International Seminar, Princess Laurentien of the Netherlands has spoken movingly and insightfully about the importance of children being recognised as fully-fledged partners in finding solutions and making decisions in all areas that affect them, including the shape and nature of their environments.

Speaking at the opening plenary session of the two day event, at Rotterdam’s City Hall, the Princess asked ‘is it not logical to listen to children’s ideas when it comes to matters that determine their future?’ and said that adults and their organisations needed to let go of some power and control, recognising the value in the chaos and energy that children have as well as their often under-appreciated capacity for innovation and good sense. ‘A society’, she said ‘cannot call itself inclusive if it does not recognise and support the agency of all its children’. She described how her Missing Chapter Foundation works to bring about dialogue between organisations and children.

The international seminar took Urban Planning and Children as its theme and heard from a variety of speakers how the inclusion of children and young people’s voices and ideas in the planning process is a vital ingredient, not just in developing towns and cities that better respond to their needs and rights, but in promoting the family-friendly environments that help to make inner city residential areas more economically viable.

The Rotterdam seminar was the first in a new series of international events, smaller and more focused than the biennial conference run by the Child in the City Foundation and its partners, the European Network for Child Friendly Cities.

An audience of 120 practitioners and researchers from a variety of disciplines gathered in the opulent City Hall and adjoining buildings, welcomed by Rotterdam’s deputy mayor, Alderman Ronald Schneider, to hear, alongside the Princess, keynote talks from the English urbanist, Professor Ken Worpole and Dr. René Tristan Lydiksen of the Kompan playground company.

Other sessions at the event featured, among many others, Professor Willem van Vliet of the University of Colorado, Tim Gill, author of No Fear, and Gabriella Burkhalter, the Swiss historian whose exhibition, The Playground Project has been touring the world. The event was chaired by Adrian Voce, the former director of Play England and author of Policy for Play, who last November succeeded Dr. Jan van Gils as President of the ENCFC.

More information about the talks and presentations from the Urban Planning and Children international seminar will be available here soon.