Playtime, a one-day symposium, linked to the Playground Project, a touring exhibition on the history of children’s playgrounds, will be held in the Republic of Ireland town of Carlow on 4 May.

VISUAL, the multi-disciplinary centre for contemporary arts in Carlow, Republic of Ireland, will stage a one-day symposium on children’s play on 4 May 2017. Playtime will be a day of talks and workshops on play, it’s relationship to culture and the arts. and a childs right to play and access to the arts and culture. Through a series of keynotes, workshops and panel discussions it will consider play in the urban realm and play as part of our cultural institutions.

As part of the day, artists Tom Watt and Rhona Byrne will collaborate to create an interactive workshop and play experience.

The day can be booked though the box office on:
boxoffice@visualcarlow.ie
The cost is €20/ €10 conc. including lunch. 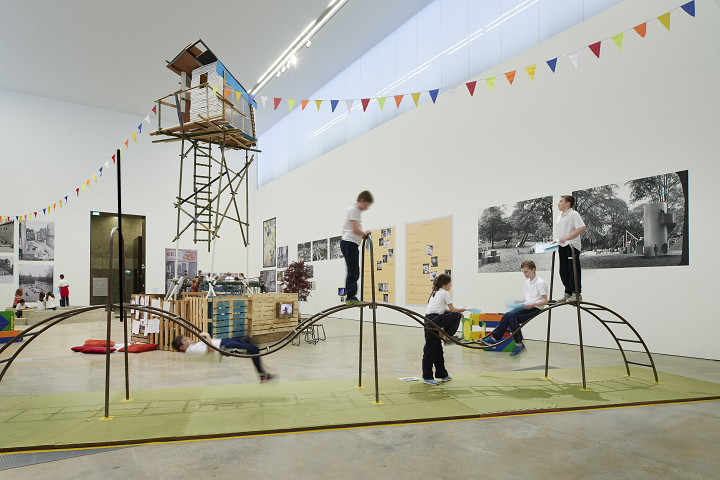 The Playtime symposium is linked to the Playground Project, a touring exhibition exploring play and a recent history of  playgrounds, curated by Urban Planner Gabriela Burkthaler. The exhibition has been realised and adapted for VISUAL in cooperation with Kunsthalle Zürich and will run at the Carlow centre until 21 May.

VISUAL says about the the Playground project:

‘Until the 1980s—and in rare cases until today—playgrounds were places for social experiments, risky projects, and spectacular sculptures. Architects, urban planners, artists, parents, and children were invited to leave their comfort zone and to venture something new. Curated by Gabriela Burkhalter, The Playground Project will bring many of these exemplary, but nowadays forgotten initiatives, pioneering acts, and adventures back, and install three playgrounds for children to run, hide and climb. May our cities invent new playgrounds!

‘Both ugly duckling and coveted space’

‘The playground is a byproduct of the industrialized city of the twentieth century. Even now, it continues to be both an ugly duckling and a coveted space. A focal point for ideas about education and childhood, about urban planning and public space, about architecture and art, about creativity and control, the playground has repeatedly resisted institutional and ideological appropriation and grown in its own sometimes quite anarchic ways. The coexistence of contradictory expectations, moments of temporary progress, and radical developments makes playgrounds so exciting. Still, as hardly anyone sees playgrounds as part of their cultural heritage, much of their history has been forgotten or can barely be understood anymore—even if all of us often have quite precise personal memories of this niche where we met our friends, took pride in new things we dared to do, braved danger without thinking about it, and learned to confront and resolve conflicts.

‘There have been four paradigm shifts in the development of the playground in the course of the last 150 years. First, at the beginning of the twentieth century, social reformers took children off the street and onto the playground. Then, at the beginning of the 1930s, the idea arose that children should play with natural materials rather than playground equipment. In the 1960s, the decade of autonomy and do-it-yourself, parents, children, and neighborhood groups began to take charge of playgrounds themselves. Finally, in the 1980s, with the end of social and political utopias, a crisis in playground design began. Today, a new pioneering spirit is being generated by young architects, artists, collectives, and activists’.