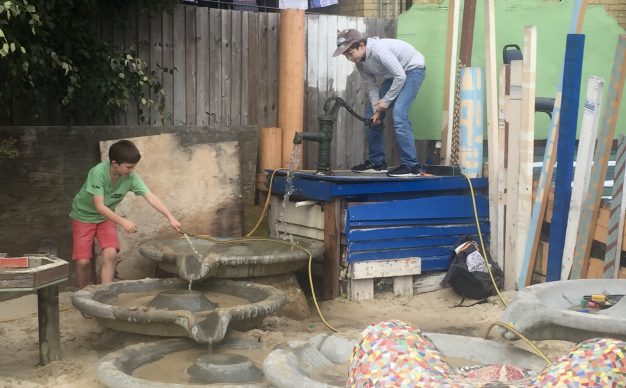 A rare glimpse into a messy oasis of adventure play

In his recent blog, Tim Gill hails the freely-available online release of an abbreviated version of Erin Davis’ film about the The Land, an adventure playground in North Wales, for its vivid depiction of the magical messiness of children at play, and for its celebration of this time-honoured way of providing space for it.

Adventure play is enjoying a moment. And at the centre of this is The Land, an adventure playground in Wrexham, North Wales. So it is great to see a 14-minute documentary feature on The Land – from US filmmaker Erin Davis – being made freely available online. Click on the image below to watch it.

It was Hanna Rosin’s 2014 Atlantic magazine cover story ‘The Overprotected Kid’ that thrust The Land into the public eye. It also features prominently in the new book Messy by Tim Harford, writer and self-styled ‘undercover economist’ (and front man for one of my favourite BBC Radio 4 shows, More or Less). Harford’s take is revealing:

“It is hard to exaggerate quite what a mess The Land is. It is a muddy scrap of ground with a few trees… There’s a trash can over there; three tyres piled together next to it… it quite literally looks as though someone took an undistinguished patch of scrubland, backed a truck into it, emptied a skip loaded with scrap metal and plastic, and then drove off before anyone called the police.”

Adventure playgrounds are characterised by what I called (in a Guardian piece from 2011) their ‘dizzy, messy, low-tech architecture’. And as Davis shows they have a fascinating backstory, with Lady Allen of Hurtwood a key figure.

It is fair to say that even amongst adventure playgrounds, The Land’s untidiness is almost unique. Compare and contrast with Glamis Adventure Playground in East London, a regular port of call for international play advocates who come to the UK. The risks and dangers that seem to lurk throughout the site are striking to adult eyes. This will resonate with followers of my work, who need no persuading of the value of a balanced, thoughtful approach to risk.

But ‘risky play’ is really a sideshow. The main event is that at their best, adventure playgrounds are the highest expression of faith in the potential of free play. And the role of the playworker is first and foremost to keep that faith. As playworker Claire Griffiths says in the video, “If you want to be quiet here, that’s fine. If you want to be noisy and loud, that’s fine. We watch the children that we work with, and see what interests them.”

Adventure playgrounds were a central part of the last Labour Government’s Play Strategy, which funded 30 new facilities across England. Tragically, many of these are now shut or struggling: a side effect of years of relentless public sector budget cuts. And it is hard to imagine anything like this level of investment happening in the foreseeable future.

Part of the tragedy is because of the relevance of adventure play to wider debates and anxieties about childhood, as Rosin’s Atlantic article showed. But it is also because of the intriguing links with progressive ideas in education. Adventure playwork directly inspired Scrapstore Playpods, an initiative to introduce loose parts play to playtimes that has reached over 300 schools in the UK.

There is also a straight line to some creative reinventions of adventure play emerging in the US that are collated in the new Alliance for Childhood book Playing it Up (which is available for free as a pdf download). Special mention should go to the Play:ground initiative that sprang up in New York last year, one of a number of schemes emanating from Pop Up Adventure Play.

Echoes can be also seen in the growing global child-led, outdoor learning movement, as exemplified by Forest Schools and outdoor kindergartens. Watch this lyrical 15-minute portrait of a day at The Secret Outdoor Garden Nursery in Fife, and spot all the parallels.

There are also clear links with high-profile hands-on learning philosophies in the USA, such as California’s Tinkering School:

Debates about the future of adventure playgrounds (and indeed about the fascinating creative tensions between playwork and learning) are for another time. For now, I simply invite you to enjoy and celebrate the underlying spirit of adventure play, as captured in this compelling, moving portrait.

Do spread the word about the video, and consider buying the full-length version yourself. And while you are at it, try to catch this musical evocation of a moment in the history of adventure play (running for a few more days in London after transferring from Bristol) along with an accompanying exhibition and film.

To quote from the closing words in Tim Harford’s book:

“Openness and adaptability are inherently messy. A playground such as The Land is profoundly disconcerting to adult eyes. It seems a dangerous, anarchic mess. That is why it’s fun to play in. And that is why it is such a good preparation for a messy life.”

This blog was first published on Rethinking Childhood