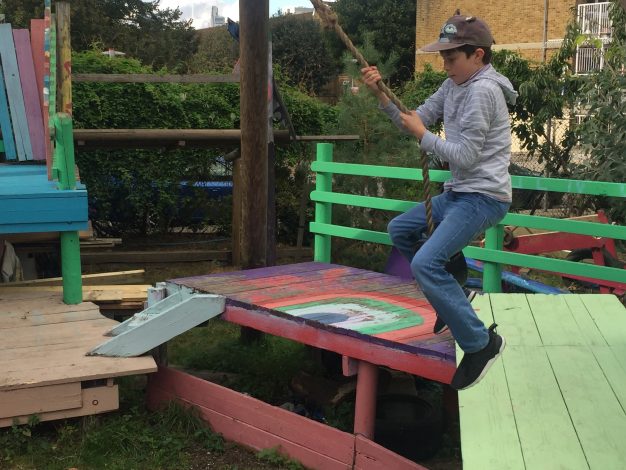 Adventure playgrounds are too important to be consigned to history

A variety of recent projects in the arts, heritage and academic sectors have taken adventure playgrounds as their theme, bringing welcome attention to this important part of the UK play scene. However, cautions Adrian Voce, it would be a mistake, and a missed opportunity, if the surge of interest were to be predominantly nostalgic or historical.

Over the last year or so, adventure playgrounds in the UK seem to have become the subject of wider than usual attention far beyond the usual play and playwork sectors. In truth, this swell of interest is around an accumulation of separate projects and initiatives, which have each either come to fruition, or have been launched, with attendant publicity, around the same time

Perhaps the most high profile of these, certainly in terms of popular culture, is no less than a brand new stage musical. The Lockleaze adventure playground in Bristol, known locally simply as ‘The Vench’, is both the subject and the setting for an original new comedy-musical, described by the Bristol Post as ‘a wildly funny and vivid new production about a miscreant group of Bristolian misfit teenagers who come together to build an adventure playground’. Junkyard will open on 24 February at Bristol’s Old Vic theatre.

The Vench was also one of a number of adventure playgrounds in the West of England cities of Bristol and Gloucester, recently mined by researchers for the memories that they have inspired and bequeathed to their local communities. Sharing Memories of Adventure Playgrounds (SMAP) was a research project of the University of Gloucestershire (featured recently on these pages here) that beautifully conveyed, through an exhibition, a film and a short report, the unique role that places like the Vench can play in the lives of successive generations of communities, and the value they hold for neighbourhoods where there may not otherwise be much that children can call their own.

Elsewhere in England, researchers and curators at the Queen Mary, University of London and the V&A’s Museum of Childhood respectively are also collaborating on an exciting new initiative on the social history of London’s adventure playgrounds. Adventures in the City: the politics and practice of children’s adventure play in urban Britain, 1955–97 is a funded PhD project that began last year and will culminate in a new, interactive, permanent exhibition (an adventure playground, one presumes – as much as such a thing is possible within this context) at the museum’s popular Bethnal Green site in East London.

One hears of other doctorates that have identified adventure playgrounds and their history as a subject ripe for researching (e.g. Shelly Newstead’s paper at Child in the City 2014). There are other artistic ventures too. Mark Neville’s recently opened exhibition of photographs on the theme of ‘Child’s Play’ chooses adventure playgrounds as the setting for what it describes as ‘play in free space’. Neville juxtaposes his commanding images of children very much taking their space in some of London’s adventure playgrounds with those of children in less sympathetic contexts: the ‘structured space’ of school, and the ‘oppressed space’ of war and poverty.

2015 saw the release of a short documentary film by Erin Davis ‘about the nature of play, risk and hazard’ set in The Land, an adventure playground in North Wales. ‘The Land’, as the documentary is also called, was described by Hanna Rosin in The Atlantic as a film that ‘will change everything you think you believe … In scene after natural scene the truth becomes obvious: With a little bit of creativity, empathy and guidance, children can be freed to experience a much more fun, adventurous and fulfilling childhood.’

This kind of exposure and recognition for a form of provision that perennially struggles on meagre budgets and – with some rare exceptions – little support from their local authorities, can only be welcome. It is important too, that both academia and the heritage sector are taking adventure playgrounds seriously as the subject of research and cultural archive..

Nevertheless, play advocates may also feel a little uneasy that so much of this attention is from an historical perspective. It is more than implied in this approach that adventure playgrounds today, if not quite anachronistic, are certainly an ‘endangered species’, as Dr. Wendy Russell acknowledged at the launch of the SMAP project last month. She estimates that there are no more than 150 remaining in the UK – and that not all of these are necessarily adventure playgrounds in the original sense of the term – compared to more than 500 in their 70s heyday.

Exploring the reason for this decline needs an article (or a PhD!) all to itself, but as Mark Neville’s exhibition and its accompanying book assert, Erin Davis’ film so eloquently conveys and the children past and present of Bristol and Gloucester’s adventure playgrounds say for themselves, the unique experience of playful community that is given to children in a proper adventure playground, is too vital to be merely the subject of a museum piece.

These supported spaces to play – with materials large and small, with the elements, and with the full spectrum of human curiosity, invention, and interaction – protected from the future focused, outcomes-obsessed world of adult-laid plans and rules for them, enrich the lives of the children who attend them. That this is in ways that are difficult to measure within the reductionist outcomes frameworks now routinely applied to public services should not, but inevitably often does, make it difficult to make the case that modern Britain needs more, not fewer adventure playgrounds.

We must hope that, far from ushering them towards the door marked ‘cultural artefact’, researching the history of adventure playgrounds, exhibiting them in museums and celebrating them through the arts will alert a new generation of advocates, policymakers and funders to their unique value to children and communities now.

Photo: Eran at Glamis Adventure Playground in 2016, by Adrian Voce