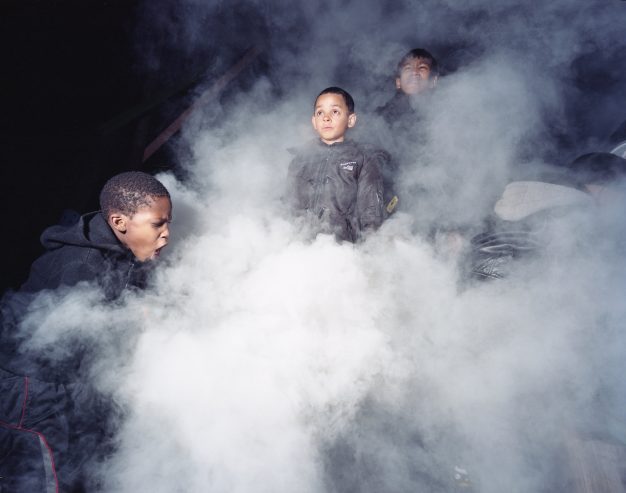 The Foundling Museum in central London tomorrow launches a major new project, Child’s Play, centred on an exhibition of photographs by the artist Mark Neville. The exhibition will run until 30 April 2017, and be accompanied by a book of the photographs and a symposium on the theme of children’s right to play, chaired by ENCFC president, Adrian Voce.

Child’s Play brings together an exhibition of photographs, a symposium and a book by Mark Neville, an artist who works at the intersection of art and documentary. Renowned for his socially focused projects, often based upon research by expert sociologists, this new project aims to raise awareness and generate debate around the complex nature of child’s play, and to advocate for improved provision for this universal right, as identified by the UN in the 2013 General Comment on Article 31 (the Convention on the Rights of the Child).

At a time when up to 13 million children have been internally displaced as a result of armed conflict, and traditional public space is being privatised, Child’s Play reinforces our responsibility to ensure that children the world over have full opportunity for play and recreation.

Neville presents a series of images of children at play in diverse environments around the world. Immersing himself in communities from Port Glasgow to North London, and in the war zones of Afghanistan and Ukraine, the artist has captured beautiful moments of free, spontaneous play. The exhibition includes new photographs of internally displaced children in Ukraine; residents of Kakuma, Kenya’s second largest refugee camp; and depictions of children at play in London adventure playgrounds, all made especially for this project.

Neville’s work challenges the romantic ideal of play with the reality of children’s lives, which is often harsher and more complex. We imagine we understand play – it’s a release from social and physical constraints or the intense engagement of imaginative pretense – and we instinctively know it is important for a healthy and happy childhood. Yet it is a notoriously difficult concept to define, and we often overlook its more subversive and aggressive elements – the importance of free, autonomous play for children in asserting power and expressing their identities. Through his photographs Neville captures children’s spontaneous urge to play and their determination to do so in the most unfavourable environments. His images reveal how, through play, children claim a place of power, safety and freedom.

Presenting the images on display along with an overview of the groundbreaking work in the field of child’s play, a book will seek to raise awareness of this universal right, and also focus attention on attitudes towards play in the UK and how the conditions for children can be improved. Adrian Voce – playworker, writer and former director of the campaigning body Play England – gives an overview of the national and international work in the field of child’s play, alongside a review of cultural representations of children at play and historical attitudes towards childhood, as seen through the prism of the Foundling Hospital, by curator Nicola Freeman. Copies of the book will be disseminated free to key policy makers and government departments, experts in the field, and to each of the UK’s 433 local councils, in order to directly impact upon government policy thinking and strategy. A symposium on 20 March will explore the issue of spaces for play, looking at the real and imagined barriers to play in our cities, and focusing in particular on the privatisation of space.

In the context of the Museum, the idea of spontaneous play is set against the institutional play evidenced at the Foundling Hospital. Founded in 1739, the history of the Hospital mirrors the growing recognition of the distinctive needs of children, and the role of play in their lives – from the proliferation of children’s toys and books in the 18th century and campaigns for playgrounds throughout the 19th century, to the closing of the Bloomsbury estate in the early 20th century, now within a fully developed area of London, to give the children better access to fresh air and nature.

Play is creative, disruptive and a universal human drive.

Caro Howell, Director of the Foundling Museum, said: ‘Play is creative, disruptive and a universal human drive. Mark Neville’s powerful images demonstrate its essential role in enabling a child to make sense of the world and to shape their place in it, no matter how challenging the environment.’

Mark Neville said: ‘The Foundling Museum is an extremely powerful context in which to explore and examine this barely discussed, yet fundamental human right: the right of the child to play. The Foundling has a long and an unparalleled history of working with artists in order to improve the rights of vulnerable children. We aim to use the Museum as a space for debate and an instrument for social change. By addressing the issues through three symbiotic strategies – an exhibition at the Museum, a hardback photobook with a targeted dissemination, and a symposium – we believe we can really make an impact on this forgotten right.

A public programme will accompany the project to comprise artist tours of the exhibition; a programme of short films; and a course run jointly with the British Library investigating the history of photography and conflict, including a session with Mark Neville at the Museum on his work in war zones today.

For more information go to the Foundling Museum website here