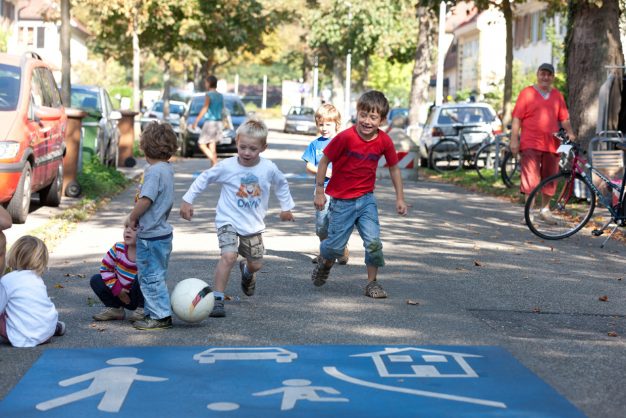 Freiburg in Germany was facing an exodus of young families, until it rose to the challenge of making its streets more playable for children … without bankrupting the city! Ann-Kathrin Schöll explains.

At the beginning of the nineties, Freiburg had a problem: many citizens preferred to stay in the countryside rather than stay in the city. Starting a family was very often a reason to abandon urban life. Studies confirmed that showed that for children’s optimum development they need space to play in liveable streets not dominated by traffic.

So the challenge for urban planners was how to increase the quality of life for children in the city – quickly and with manageable costs. The first step was to introduce 30kph speed zones across the main thoroughfares. In new construction areas, residential streets were increasingly designated as traffic-calmed areas.

Now there are 180 such zones in Freiburg and the positive effect on residents has led to requests for more traffic-calmed areas from existing quarters. This initially failed because the road traffic regulations for such areas “normally” provide for a “standard” expansion. The municipal civil engineering department therefore developed a special model for the subsequent conversion of existing residential streets into traffic-calmed areas in such a way as to fulfil the qualitative requirements of the road traffic regulations, without completely redesigning roads.

The Government Bureau agreed to support this “Freiburg model” for particularly suitable roads as part of a pilot project. This consideration was crucial, since the city could only see the project as a viable solution if it could be executed without great structural and therefore financial expenditure.

Freiburg traffic planner Jan Maurer, who has worked for twelve years on the transformation of residential streets into traffic-calmed areas, explains: “According to the Road Traffic Ordinance regulations, traffic-calmed areas, by virtue of their special design, must convey the impression that the ‘stop’ instruction to drivers is predominant and that vehicular traffic is of secondary importance to pedestrian right of way. Instead of an identical construction, as the rule prescribes ‘generally’, we meet these requirements with cost-effective markings and bollards and a uniform design of the entry ramps into these areas”.

The secret of the success of the Freiburg model  which has already been implemented in 14 existing residential streets, is that the city does not impose the initiative, but supports the commitment of local residents.

“The process has been improved over the years,” says Jan Maurer. The way it works works is that if a family wants to have their road converted to a traffic-calmed area, they consult the other residents of the street to solicit their support. The city provides forms and petitions on their website. The completed lists go to the city administration, more precisely to Jan Maurer. Together with the traffic authority and the police, he looks at the road conditions – traffic volume, topography, resident demography and parking space. The consent of residents is a decisive factor for him, and thorough – and confidential – consultation is therefore vital.

“If your neighbour asks you to support such a project, you may not dare to say no and risk upsetting them, especially if they have children,” explains Maurer. “Or you be in favour in principle, but not want a parking lot on your front door.” For these reasons, the city’s own consultation process is anonymous, ensuring that every citizen can communicate his opinion to the authorities unaffected. Only when the affected households have reported back on the concrete plans, does Maurer make a decision whether or not to proceed. If the survey results are 50:50, this is not enough. “There are on-going conflicts inherent within every street,” says Maurer. “A 70 per cent vote in favour is a very good starting point.” Family votes are doubled – positive and negative.

If the decision is for remodelling, the city acts quickly to execute the plans. The entrance to the street is narrowed by bollards, which act as a gateway. Cross-strips and pictograms on the road show that a new area begins, where playing children can be expected. Offset marked parking spaces are arranged so as to reduce driving speed, and play areas further convey the overall impression of a shared space; a fundamentally different environment to that of a “normal” residential street.

What action is taken if drivers do not comply? “We have a big sign that we put up at the entrance to the streets where drivers are frequently breaking the rules,” says Maurer. “It spells out that the road is a traffic-calmed area and what the rules are”. Information flyers are also distributed to remind the residents how the scheme works. “A traffic-calmed area is not guaranteed forever,” says Maurer. “At some point children grow up and have their own scooters or cars.” Then the new demographic has to have the opportunity to renew its agreement to the scheme – or not.”