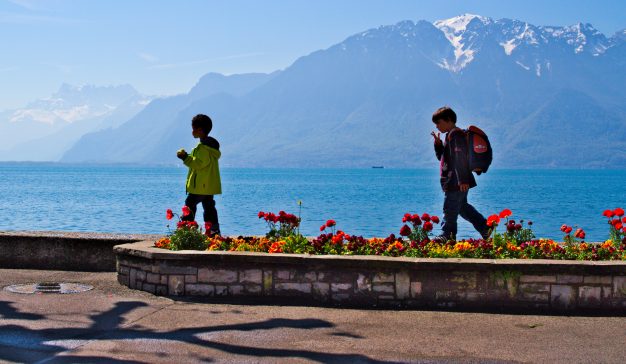 The Green Party in the French-speaking canton of Switzerland is proposing a street closure scheme for Geneva, to allow the city’s children more opportunities for outdoor play.

Elected member of the Green Party, Alfonso Gomez, would like to see some of Geneva’s streets closed to cars on Wednesdays and Sundays to give children more space to ‘run around’ and enjoy the public spaces of the city. In making the proposal Gomez cited a recent study by Pro Juventute showing that children in cities spend an average of only 47 minutes per day playing outside, compared to an estimated 3 to 4 hours in 1970.

The councillor drew a link between this stark reduction in outdoor play, and therefore physical exercise for the young population, and the rising incidence of childhood obesity, attention deficit disorder and other ailments. He also cited the World Health Organisation’s recommendation that children aged 5-17 should get at least 60 minutes of moderate to vigorous physical activity per day.

Gomez was supported by another Green Party councillor, Esther Alder, who has met with children in the Eaux-Vives district of the city to ask them for ideas. The party has been examining a similar initiative in Lugano, in the Italian-speaking canton of Ticino, which is widely believed to have been a success.

The Green Party may face a challenge, however, in having its proposal adopted. Patricia Richard of the PLR party has voiced her opposition to the scheme, suggesting that it would be a mistake to close any part of the city centre to cars at any time. She claimed there are enough parks and playgrounds in the city and criticised what she calls the ‘Green Party dogma’ that ‘everyone should walk everywhere’.

Any final decision on the scheme, even if it receives the backing of the canton government, would also need the city authority of Geneva to agree before any roads could be closed.