The Mayor of London, Sadiq Khan’s announcement of a limited pollution charge for some drivers in central London has received a mixed response from children’s health campaigners, reports Adrian Voce

The Mayor of London, Sadiq Khan has announced what he says will be “the toughest emission standard of any major city”, to combat the city’s high levels of pollution. From October 2017, older, more polluting cars will have to pay a £10 charge to drive in central London, in addition to the current £11.50 congestion charge that applies to all vehicles.

Confirming he would press ahead with the fee, to be known as the T-charge, Sadiq Khan said: “It’s staggering that we live in a city where the air is so toxic that many of our children are growing up with lung problems. If we don’t make drastic changes now we won’t be protecting the health of our families in the future”.

The announcement came after fresh warnings about the poor quality of London’s air. The mayor spoke as he launched an online vehicle checker on the Transport for London website that will enable drivers to check whether their vehicle will be affected by the new charge. The levy is expected to affect up to 10,000 of the oldest, most polluting vehicles every weekday apply to vehicles that do not meet the Euro 4 standard – typically those diesel and petrol vehicles registered before 2006.

London joins a growing number of cities around the world taking action against rising air pollution. In Paris, older more polluting vehicles are now banned between 8am-8pm on weekdays. Air pollution is believed to cause almost 40,000 premature deaths every year in the UK and was in April labelled a “public health emergency” by a cross- 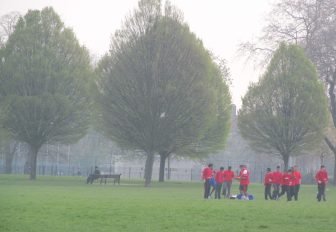 party committee of MPs. The government is facing a new legal challenge over the adequacy of its plans to tackle the issue, having already lost a previous case in 2015.

Last year Khan published research that showed numerous schools in the capital were in areas that exceeded safe legal pollution levels. His plan to cut air pollution includes extending the ultra-low emission zone beyond central London to the North and South Circular roads from 2019. Drivers would not pay both the ULEZ and the new £10 charge and the latter will not apply to taxis.

When the Mayor launched his consultation on the proposed T-charge last July, the chief executive of Great Ormond Street children’s hospital, Dr Peter Steer, said, “The mayor’s drive to clean up the capital’s air is fantastic news for our patients and staff. Children living in highly polluted areas are four times more likely to have reduced lung function in adulthood, yet improving air quality has been shown to halt and reverse this effect.”

However, not all campaigners have greeted the measure positively, with some calling for a greater intervention by the Mayor to clean up the air around London’s schools. Paul Hocker of the charity London Play said:

“With the air outside some London schools now at twice the level of EU legal limits we are calling on Mayor Khan to create clean air havens around schools with the poorest air quality. We are asking for all but essential traffic to be restricted around schools in the drop off & pick-up hours when pollution is at its worst”.

London Play, began its campaign for clean air havens around schools last year; proposing the use of traffic orders, including play street legislation, to sustain traffic free buffers throughout the week for children attending schools with the worst pollution.

Researchers at King’s College estimate 9,500 people a year die in London from respiratory illnesses caused in the main by toxic vehicle emissions. Professor Frank Kelly of King’s College told London Play: “The cabin atmosphere in most vehicles in traffic (especially if windows are open and air vents are not on recirculation) is actually worse that on the nearby pavement”

Hocker continued: “The King’s College research dates back to 2015 and yet the lack of urgency to address this threat to public health has been scattershot and half-hearted. We understand that the Mayor has to juggle conflicting interests. It’s not an easy job. ‘Keeping London Moving’, as the Transport for London tagline promises, is in his purview but so is the environment and policies for health. The Mayor can chip away slowly at this problem with initiatives like the £10 T-charge on vehicles with the worst emissions … or he can break cover and be seen as an unabashed advocate for children’s health and clean air.

“He needs to engage with all Londoners, particularly the families of the capital’s 1.8 million children and put to them this stark choice; a blank cheque on driving in London or cleaner air for all our children”