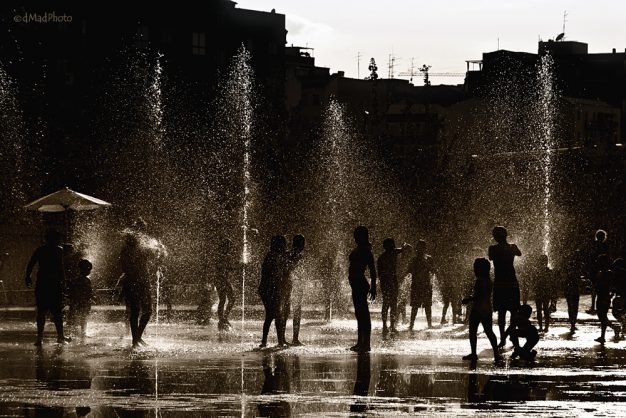 More than half of the world’s children now live in cities. In this first of a three-part article Sam Williams, of the planning and design specialists Arup, writes about the need and the challenge to make our urban environments truly child-friendly.

“After becoming a dad, I realised the enormous potential for child-centred activities such as play streets to bring people and places together. I set one up on my own road with the help of London Play, and it has been happening monthly for over a year now. It has been great getting to know all the people living nearby, and seeing the kids make friends. We invite the elderly neighbours, and always make sure there is tea and cake out.

More than half the world’s children live in cities, and it is much more than just a backdrop to their lives. A city can have a huge influence on them and their experience of growing up, both good and bad. In return they influence the city, both through their presence and their absence.

Children’s health and wellbeing, the amount of time they spend playing outdoors, their levels of contact with nature, their ability to get around independently – these are all strong measures of how a city is performing, not just for children but for everyone.

This is because the things that children want are fundamentally the same things that everyone else wants: safe streets, green space, clean air, somewhere to call home, and the freedom to be themselves. Creating a child-friendly city is about showing respect for human dignity. To achieve it though we have to think very hard about the choices we make as designers, planners, policy makers, parents, and even as children.

There are many challenges to creating child-friendly cities, but the biggest, in the UK at least, has to be fear. And the fear that causes the most limits to be put on a child’s freedom is that of a child being hit by a car. The result is that children stay indoors in front of the TV, and their parents drive them everywhere.

A child’s day can become dependent on when and where the driver has the time and inclination to go to. They are even driven short, walkable distances to school; the result is a vicious cycle of more cars, more accidents, more pollution at the school gate, and less time to spend outdoors walking, playing and talking with friends.

Nowhere to go, nothing to do

People can get used to there being no children out, and there can seem to be less reason to supply adequate play and youth facilities. Young people can find themselves with nowhere to go and nothing to do. They are often made to feel like criminals just for wanting to see their friends outside the home, as people mix up anxiety about criminal behaviour with actual criminal behaviour.

(this article was first blogged on Play England)