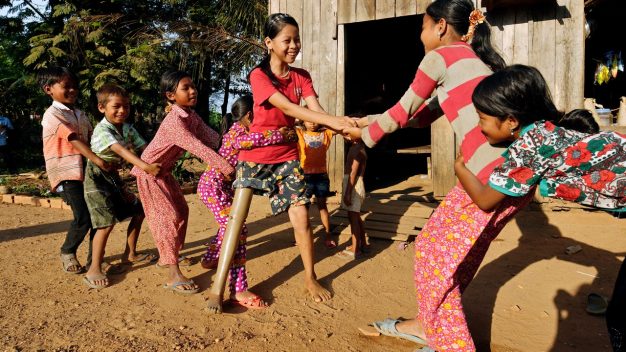 Disabled and refugee children have the right to play too

Children’s right to play is universal, but often overlooked. This is especially true for refugee children. When they are also disabled, the neglect of this essential human right – so important for children trying to cope with trauma – is all too common. Here, Aleema Shivji, executive director of Handicap International, explains how the award-winning charity works to redress this for some of the world’s poorest children.

During my missions around the world as a physiotherapist for Handicap International, one of the things that always got to me was to see so many children having their childhood taken away from them – whether it’s due to conflict, disaster, extreme poverty or violence.

But the fate of children who have a disability AND live in refugee camps is particularly overwhelming. Their rights are neglected every day. Most of them don’t have access to education. The harsh living conditions in the camps can make them even more vulnerable to violence, abuse and exploitation. They often live in extreme poverty with poor health conditions. They often don’t even have the opportunity to play and just be a child.

The UN Convention on the Rights of the Child states that every child should have the right to play. Unfortunately, this right is often neglected even if it is fundamental for each and every child. That’s why Handicap International has partnered with the IKEA Foundation to launch the Growing Together project in Bangladesh, Thailand and Pakistan. This is part of IKEA’s Let’s Play for Change campaign that advocates children’s rights and fund projects in some of the poorest communities in the world.

We want to give disabled and vulnerable refugee children the right to play and be a child once again. As Eike, a 10-year-old boy who lives in Mae La, a refugee camp in Thailand, explains: “There’s only one football field in a camp for 40,000 people. We mostly play around houses, on a narrow, often muddy path, filled with holes and loose rocks. That’s far from ideal. And we have no toys”.

Why it is so important to fight for children’s right to play? Simply, play makes children healthy and happy. Through play, children can learn, improve their self-esteem, and develop important life skills like empathy, communication and resilience to stress. Play promotes social cohesion and inclusion but it doesn’t stop there. It also gives children who have had to flee conflict the opportunity to share and get support to overcome traumatic experiences and feel safer.

“Here, she can be herself”

Sadly, we know from experience, that children with learning difficulties and physical disabilities are often most likely to be excluded from play and learning activities. Children like Sue’s daughter in Mae La camp:  “My eight-year-old daughter Julia has no friends. Other children avoid her because she’s no fun to play with. She’s too slow. Here, at the Handicap International rehabilitation centre she can be herself and feel relaxed” says Sue.

The aim of our Growing Together project is to create inclusive playgrounds in refugee camps that, despite being in existence for decades, remain largely forgotten by the world. These playgrounds will promote positive well-being for all children, and allow their social and emotional development to flourish. Play is also an important element in physical rehabilitation care, as it stimulates children to do their exercises and helps them improve coordination and strength. At Christmas, when I saw children playing with their new toys, I thought of Eike and Julia. Next year, I hope their faces will also illuminate with laughter as they discover the pleasure of playing, like any other child.

Reblogged from the Thomson Reuters Foundation