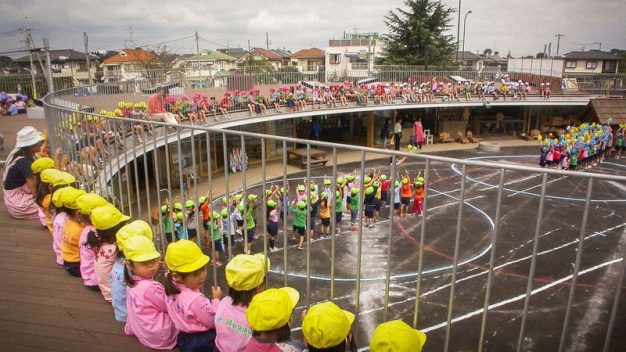 How do you build the perfect space for children in the city?

Designing the best cities for children involves recognising their right to play as well as learn, says groundbreaking kindergarten architect Takaharu Tezuka. This article by the Guardian’s Libby Brooks looks at his approach.

Whether it’s the Radical Childcare Hub in Birmingham exploring parent-led co-operatives, or an experimental nursery located within a care home in Seattle, designers and innovators are coming to the same conclusion: in order to build the perfect city for children, you have to create the right environment for all ages.

As the groundbreaking kindergarten architect, professor Takaharu Tezuka, puts it: “It’s important to design a society that is interdependent. We can put the elderly right next to the kindergarten – actually that is how society used to be. These days, society tries to solve all its problems by dividing life into small puzzles, but if you put them together, you can see the bigger picture.”

This holistic approach to design for children was a key theme of Making Space 2016, an international award and conference hosted by Children in Scotland last month, where Tezuka delivered a keynote address on design for children. He has garnered global plaudits for his oval-shaped Fuji Kindergarten, near his native Tokyo, where there are no physical boundaries between classrooms and the outdoors, and the roof forms part of the playground.

Seattle has a preschool for under-fives located in an elder care facility, with an average age of 92

Designed around a philosophy that values children’s right to play as well as learn, Tezuka is determined to change the way we design for the youngest people in society. “We need discussion and debate on an international platform about whether the needs and rights of children to play and learn, uninhibited, are sufficiently understood and taken into account during the architectural design process,” he explains.