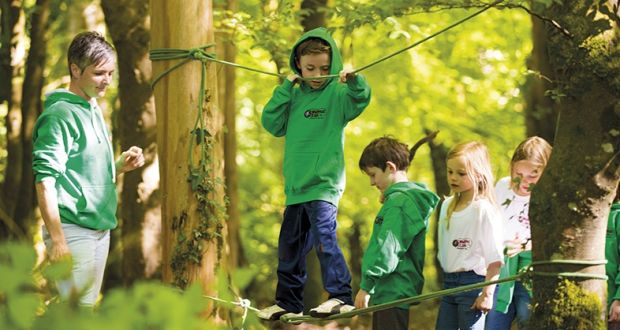 Forest adventures: Ditch the laptop and let your child be wild

Coillte project aims to introduce children to the wonders of the great outdoors. Many of us might think that kids prefer to play on screen than play outside; it’s certainly what they tell us when they’re told to turn off their Nintendo DS.

With an increasing awareness of ‘stranger danger’ and the ever-growing relevance of technology to everyday life, parents could be forgiven for believing that their kids are better off spending time indoors with their eyes on a game. But a recent study from Coillte suggests that children are missing out on vital aspects of their social and physical development by staying in rather than playing outside.

In a rapid turnaround from pre-internet days, nine in 10 adults believe that children spend more time looking at screens than any other activity, and almost half of children today have never climbed a tree. Three-quarters of parents believe their children spend more time online with virtual friends than they do playing outdoors with other children, and that children are less able to socialise and make new friends than when they themselves were a child.

The results indicate a drastic change in modern childhood development, both in terms of ability to form social connections and in physical health. But Coillte have responded to their findings: forests all over the country this September will be teeming with six- to 12-year-olds as they explore navigation, rope swings, shelter building, knot-tying skills and fire-building, all while forming real-life friendships with children their own age.

These activities that parents will remember from their own childhood will form part of the Compass Club programme, Coillte’s new after-school initiative which aims to introduce children to the great outdoors. It couldn’t be further away from ogling a laptop screen.

“When I was a kid, if you climbed a tree and fell out of it, you just climbed it higher the next time and made sure you didn’t fall out of it again, but now kids don’t do that. The closest a lot of kids get to a forest now is through building one on Minecraft,” says Compass Club general manager, Shane Stafford.

“What we’ve developed with Compass Club is a solution to let parents safely hand over their children so they can experience rough and tumble in an age-appropriate way outdoors, while also being in a secure, structured, but feels-unstructured environment. It really unleashes their creativity and their ability to live up to their potential.”

The after-school programme runs a two-hour class one afternoon a week for six weeks. It ties in with the primary school curriculum on science, history and geography, so that kids are adding to their knowledge about the environment through experience rather than from Wikipedia.

“Compass Club is a great example of experiential learning and being involved in the thing you’re trying to learn,” says education consultant Emma Godsil, of Godsil Education. “These geographical and scientific phenomena that they learn about in the classroom are brought to life for them when they go out.”

Godsil Education was involved in implementing the strength-based education approach that forms the ethos of the Compass Club programme, through developing a diagnostic tool which allows leaders to identify the strengths children show in each session. “Strength-based education is the idea that working with what a child is naturally good at, that trying to work out what their strengths are and nurturing them, is far more motivating than trying to emphasise or spend time fixing a child’s weaknesses,” says Godsil.

“We’ve embedded this philosophy and the literature and the research behind it into the Compass Club programme. It’s an ethos which we train the leaders in.”

Parent Sinéad says her nine-year-old son greatly benefitted from the after-school programme he attended in Galway. Although he always enjoyed being outside, the structure of a group programme gave him a way to do in real life what he had mostly experienced through screens.

“With a lot of children his age, the balance is quite difficult to achieve. They do get a lot from interacting with all these gadgets, but they don’t have the opportunities to get out as often,” she says.

“With Compass Club what they’re doing is enacting some of the games that they’ve lived imaginatively on the screen, but in a real environment. He loved the shelter building; he really loved the treasure hunt and building a fire. He wanted to go into the stream, and the leader said that’s fine, you’ll just get a bit wet, so he went in and negotiated the stream and came out absolutely soaked and delighted. It’s just that licence to enjoy and be free.”

Stafford says that once children get involved with outdoor activities, they come back for more – and it’s better for them socially, physically and just simply more fun. “Coillte grow the trees, we grow the kids,” she says.

Coillte runs courses in 19 counties across the country, with over 45 courses running this September. For more information, see www.compassclub.ie