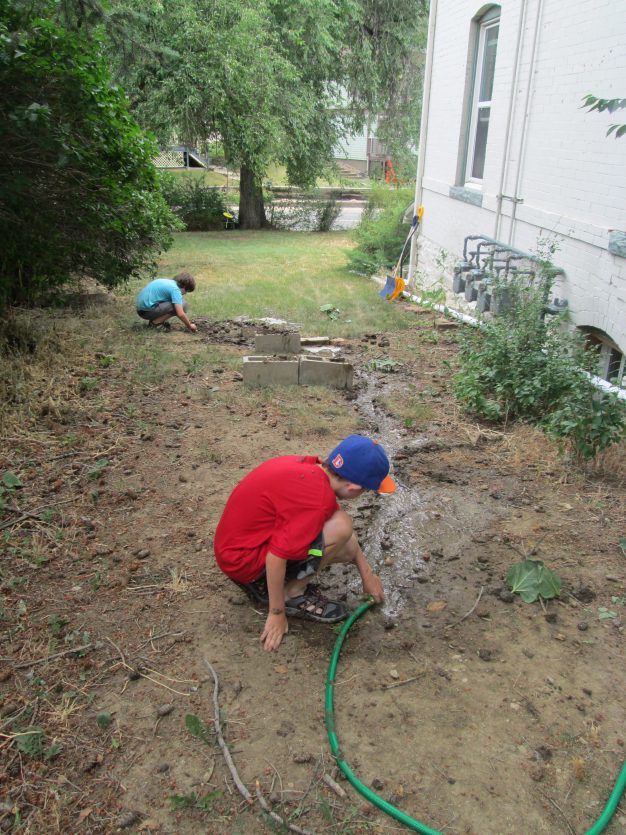 Nature near and far – reflections on integrating children, nature, and the city

The recent publication, Children, Nature, Cities (Murnaghan and Shillington, eds., 2016) is a wonderful compilation of reflections and critical analyses of the interpretations of nature in the city, and children’s experiences of both.  Using the lenses of political ecology and geography, they present a wide range of ways that children can and do interact with nature in cities, as well as less discussed issues and barriers to accessing and experiencing such spaces among different ages and ethnicities through participatory and ethnographic research. Important to this critique is the persistent idea that nature is far away – it is somewhere out there in the wilderness, separate from children and the cities in which they live. However, the wide range of articles on the Child in the City website alone attests that we have a much broader framework for considering what urban nature might look like.

I wanted to take a moment to reflect on the importance of this subject, from my own perspective as a former coordinator of Growing Up Boulder, and as a mother of a 10-year old who is passionate about nature. In this article, I reflect on some of the capabilities, described by Louise Chawla (2015) and summarized in the post, “Nature, Health, and the Equity of Urban Parks” to think about nature in the city.

Capability 1. The Ability to move freely from place to place

While the City of Boulder has a well-developed cycling and pedestrian system, it has been my experience that very few children have much independent mobility there until they are around 11-years old and that this is very much dependent on the neighbourhood in which they live.  Children who live close to the downtown area, or in new urbanist neighbourhoods within the city, tend to have higher mobility than the [majority of] children who do not.  (And what they have access to remains another subject.)  In planning for walking and cycling, young children’s needs for mobility must also be considered, because these are children with an interest in exploring their neighbourhoods and the nature within it, but they do not have these opportunities unless they are with adults.  [See related articles: Young people’s perspectives on “15 minute neighbourhoods” and Walking Laboratories:  Young People’s Experience of the Street].

My own son has very limited independent mobility – though really wonderful walking and biking do exist, there are not enough children adjacent to our home for independent mobility to be desirable, or safe – but the greatest asset of our neighbourhood is the unkempt alley behind our house, where nature thrives, and freedom reigns.  And this is critical – the nature he experiences on a daily basis is just outside the door.

Capability 2. The Ability to have pleasurable and sensory experiences

Boulder is very effective in the way it integrates nature throughout the city.  Greenways have been planned and protected since the early 1900s, with a rich diversity of wildlife and natural spaces along creeks and waterways that provide a wide range of experiences for children.  However, it is often the vacant lots and unmanaged spaces that provide pleasurable experiences.  Less managed spaces, such as an irrigation ditch next to a public housing site, or a park with unmanaged vegetation, provide many opportunities for creative play (Derr and Lance, 2012).  Kelley (2016) similarly found that some urban youth in Tacoma, Washington preferred an informal gulch than the more formalized public spaces.  The way children choose to experience nature will vary by age as well as by ethnicity and culture, but our work with Growing Up Boulder suggests that all diverse ages request access to nature when planning the city, with variation in scale and purpose but not desire for nature in the city.

In my own back yard, less than a mile from downtown, an unkempt alley is home to deer and fox, and an old shed is home to a family of wrens.  Each spring and early summer we have seen young babies:  deer fawn, still spotted white; a wren mother feeding its young.  We are able to see this wildlife precisely because the spaces in the alley are managed very little, if at all.  Marti Jansson and colleagues (2016) discuss the importance of thinking about urban green spaces on a variety of scales and also for considering spaces that are not managed or well kept within the city.  From the time of Lynch’s original studies in the 1970s, to the present, researchers have found these to be spaces children can manipulate and manage.  The lack of adult management, in the form of overgrown shrubbery, can sometimes be scary, but alternatively can be an invitation for children to incorporate nature into their play more dynamically and freely than in well-manicured landscaping.

At our own home, the side of our house is not managed well – it is dry and shaded by a spruce tree.  Not much grows beneath it, and so it is often a dry patch of soil in summer. My son and his friends have repeatedly used this space to make small villages, in which they incorporate many loose parts and imaginatively develop an elaborate system of clay huts, pinecone structures, agricultural lands and flooded rice paddies. Their access to loose parts such as cones, grass, and stones; to running water; to digging tools; and to the freedom to significantly alter the space without fear of adult sanctions are critical to their enjoyment and creativity in the process.

This is one example among many possible ways that children can actively shape their own environments. Is the making of this village what comes to mind when we think about an “appreciation of nature”?  The authors in Murnaghan and Shillington’s (2016) book argue that we are missing opportunities for understanding what nature looks like when we do not see it through the eyes of a child. What is required is not so much the development of public spaces (although these too are important and provide many functions), but the allowance of some unmanaged spaces, in the interstitial spaces of cities and homes, where children can easily access nature on their own terms.  In many cities, access can be limited by gang activity or available spaces to play, even when parks exist (e.g., Palma 2016).  So it is especially important to think about ways to create close-to-home nature and not just structured “whitewashed” experiences that erase cultural differences from diverse populations in the city (Palma 2016). 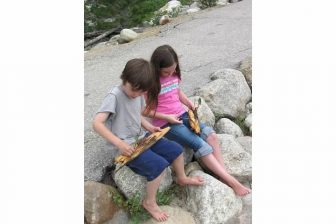 Capability 3. Forming attachments to things outside ourselves

Since my son was a baby, we have exposed him to nature in many realms.  Admittedly, many of these have been the stereotypical types of nature – national forest lands outside the City of Santa Fe where we once lived, as well as some of the United States’ most spectacular landscapes and national parks.  My son has formed attachments to many of these special places, such as Arches National Park or Rocky Mountain National Park.  But notably, his favourite places within these parks are those where he feels a similar freedom to “the village” at home. Included among these is Arches’ campground – where he can freely climb on rocks, take photographs of Lego figures as if they are on Star Wars’ Tatouilline, and bounce on the limb of a juniper tree.  Or the Alluvial Fan at Rocky Mountain where he can build boats, move rocks, and search for fish just below the falls.  These are also places that we repeatedly visit, and so the patina of time reveals these spaces in many seasons and changes through the years.  We have similarly taken advantage of the many natural wonders in the City of Boulder, from the open space trails to the Boulder Creek and many parks and greenways.

However, the place he loves the most is the unkempt alley behind our house.  It is the daily encounters with butterflies, ‘roly-polies’, and the deer that bed down each night just up the hill, which make it special.  Boulder is unique in that it is ringed by thousands of hectares of preserved land, at the foothill of the Rocky Mountains.  But many urban birds and wildlife find their homes in cities of all sizes, from the bat bridge in Austin, Texas, to small cottontail rabbits that make their homes in most cities of the U.S.

We know that it is not only direct experiences with nature that foster environmental care and connection, but also adults who help children see the potential of nature (Chawla and Derr 2012) – whether it be the curly cup gum-weed that grows along the street’s edge, the granite veins in a rock, or the smallest of insects in the shade of a tree.  Less traditional groups, such as public health workers, are starting to explore ways that diverse children and families experience nature – and how to provide culturally responsive nature experiences in cities such as Oakland, California (Razani 2015).

Capability 4. Showing concern for and relating to animals

In nearly every participatory planning project I have worked with in Boulder, children show concern for wild animals and ask to play a role in caring for nature more generally. I have often wondered if this is a direct result of the city’s values and the nature that is so woven into the urban fabric of Boulder? Is it a result of the families who choose to live here, or is it more universal than this? Children in many cities, including neighbourhoods of Mexico City (Gülgönen and Corona, 2015) and the “hood” (Douglas, 2016) of New York City have also said that their ideal city includes nature – trees and parks, flowers, and green spaces to play and socialize.

We also know that direct experiences and adults who foster respect are among the most consistent variables in developing environmental care (Chawla and Derr, 2012).  An exciting outcome from Boulder’s resilience research [see “Child Friendly Cities Add Value to Resilience Planning”] is to develop a Citizen Science program that fosters the co-creation of knowledge within the city. Young people will have an opportunity to play a strong role in this process. Some of the proposed activities include a “bioblitz” to observe wildlife and raise awareness through an iNaturalist project of Boulder County.  This aspect of the resilience initiative, just being launched, is one of many ways to explore the nature that is part of every city, and to learn with and from children, of its value.

Designs and programs should be contextualized based on local cultural and geographic contexts, and this new volume articulates a truly wide range of experiences. Children, Nature, Cities is an important contribution for the what and how of child-friendly nature in cities, and for ways to consider questions of equity from the perspectives of children themselves.

Gülgönen, T. and Y. Corona. 2015. Children’s Perspectives on Their Urban Environment and Their Appropriation of Public Spaces in Mexico City. Children, Youth and Environments 25(2): 208-228.