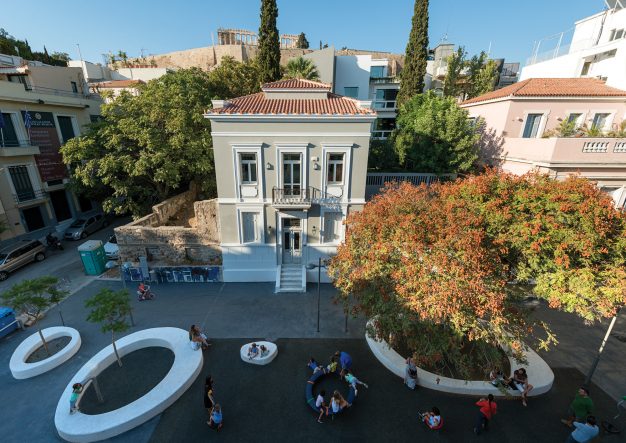 Just a few steps away from the Acropolis, one of the world’s most famous historical sites, in the Centre of Athens, rises a playground inspired by Pieter Bruegel’s 1560 painting ‘Children’s Games’.

The Six Thresholds playground, at Kallisperi Street, was designed by Buerger Katsota Architects and built in 2013 as part of the PX ATHENS initiative to reconstruct and reinstate several existing city centre play areas. The project is an enterprise of the non-profit organisation Paradeigmatos Harin, in collaboration with the city authority and its various donors and sponsors.

Lack of care for public space

“While Greeks adore children, public facilities for kids are rare and usually in a dismal condition”, claimed Winfried Lechner, an associate professor at the National and Kapodistrian University of Athens. His charge is that is inconceivable that a city like Athens, in the south of Europe, with a warm and comfortable weather during most of the year, offers such limited opportunities for its children’s outdoor play. In fact, the capital’s existing spaces for play do not stimulate children’s curiosity and creativity, being repetitive, standardized and without any pedagogical quality. They are also very often in a degraded condition, because of the lack of routine maintenance and the general lack of care for public spaces. Today, only half of these spaces are suitable for use by children. 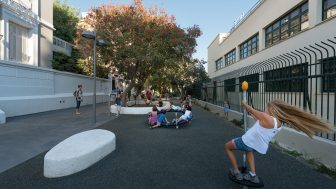 Creating a network of high-quality “islands”

The PX ATHENS initiative is committed to redesign ten playgrounds with a particular strategy, based on seven principles:

The aim is to design spaces for play that offer the possibilities for children to discover nature, improve their physical skills, encourage exploration and observation, learn by playing and develop their identities and self confidence within safe and welcoming environments.

‘Six Thresholds’ is the pilot project of this network of high quality “play islands”. Before the renovation, the street, defined at the north side by buildings of the 30’s and 60’s and, at the south side, by an elementary school, was characterized by flower-beds and 70s seating. Today, white parabolic shapes, surrounding existing trees, are used by children to run, skip and jump; or to sit and relax, encouraging communication between children and their families. Water features, including a play fountain make the whole design even more enjoyable, with children’s love of water especially pronounced in the heat of the Athens day.

There are several kinds of balance and tumble toys to improve children’s motor skills and concentration and to engender collaborative games, improving the spirit of cooperation.

Children, who pass the playground on their way to the adjacent public school, adore the place, adults have enthusiastically adopted the shady, white seating area carefully organised around trees and the area has generally become a vibrant centre of activity for the whole neighbourhood (Winfried Lechner).

The PX ATHENS initiative was presented at the13th International Architecture Exhibition of Biennale di Venezia, with the “Made in Athens” project. One aim of the project was to animate a narrative of Greece as country where creativity and the celebration of childhood does not stop even with economy meltdown. New and innovative design strategies, in fact, are thriving in the urban spaces of Athens, improving citizens’ everyday lives in a city full of hope for a future that is embodied in the joy of its children playing in beautiful, inspiring city centre playgrounds.