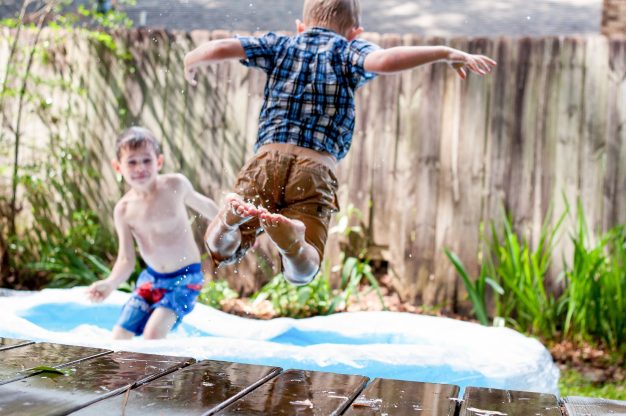 There are good practical reasons for play advocates to vote ‘remain’, but perhaps, suggests Adrian Voce, none of these matter. The play movement is innately open and inclusive; the opposite of the leave campaign’s main argument.

The imminent referendum on Britain’s membership of the European Union may, on the face of it, have nothing to do with children’s play. Regular readers of these pages – along with anyone who has responsibility for planning, funding or managing play spaces – will know, however, the importance of policy context for what we are trying to achieve. Tomorrow’s vote will either hugely change that context, withdrawing our government and our courts from the treaties, conventions and laws of the EU, and our economy from the single European market, or it will keep the UK within the context of European as well as national policy for the foreseeable future.

So poorly has play policy faired under David Cameron’s administrations since 2010 that some advocates may reasonably argue that we couldn’t do any worse. They may be inclined to vote ‘leave’, if only to give the Prime Minister and (most of) his Conservative government a bloody nose. Others may believe that the EU is a protectionist, capitalist cabal, primarily benefiting big business and social elites. Here, a vote to leave would be for the more progressive, socially inclusive, fairer Britain that would naturally look more favourably on public play provision and child-friendly planning. Each of these arguments to vote ‘leave’ is tempting. And they are both wrong.

‘would the play sector fair any better outside of the EU?’

It is true that the current and previous governments of Mr. Cameron have been a disaster for the play sector. One of the first acts of the Coalition in 2010 was to shred the Play Strategy, and then to remove play policy from ministerial responsibility altogether. The effect on local provision has been nothing short of devastating. But would the play sector fair any better outside of the EU?

Even if one dismisses the possibility of Brexit triggering a widely predicted recession, the vision championed by the leave campaign – of a dynamic, independent country, free of the shackles of big bureaucratic government and its cumbersome regulations – is for the kind of low-tax, small-government, free market economy that would inevitably require still more of the austerity that has driven hundreds of long-established public play services into the dust – or into the hands of private businesses. A Britain – quite possibly soon reduced to a separate England – run by the right-wing of the Conservative Party will not be a new dawn for progressive social democracy. Policy for play will be derided as ‘nanny statism’ and the bonfire of public play provision will blaze more fiercely than ever.

Economics aside, there is a broader reason for play advocates to vote for ‘remain’. When I spoke alongside the then shadow schools minister, David Willetts, at the Conservative Party Conference in 2007 (as an independent ‘specialist’, I hasten to add) I was a little perturbed to find that, as opposed to the thoughtful debate on play policy that I had naïvely understood to be joining, the session began with Willetts’ full blown assault on the policies of the Brown government (which I was then advising on its forthcoming play strategy). One of the targets for this highly partisan rhetoric was the EU, which Willetts quite inaccurately blamed for the ‘health and safety madness’ that was stifling children’s freedom to play.

‘a Europe-wide movement … has rich potential for future projects to develop our field, its reach and its impact.’

There are, of course, no EU regulations about children’s play: the European safety standards for play equipment are a voluntary, industry-led code, whose merits or otherwise are part of a different discussion. But in making a connection between play policy and the EU, Willetts was, inadvertently, noting a link that has, in fact, been a great benefit to the play movement in the UK. One of the very few sources of central public funding for play that has survived the Cameron years has been European Social Fund (ESF), whose continued support for the University of Gloucestershire’s VIPER (Volunteers in Play – Employment Routes) project, for example, is in a long tradition of ESF funding for vital playwork infrastructure projects in things like training, qualifications and quality assurance. This source of funding would be cut off to all future UK applications in the event of Brexit, whereas a Europe-wide movement, drawing upon the rich networks that already exist, inspired by the success of the International Play Association with the UN, and supported by the ESF, has rich potential for future projects to develop our field, its reach and its impact.

There are good practical reasons for play advocates to vote ‘remain’, but perhaps, suggests Adrian Voce, none of these matter. The play movement is innately open and inclusive; the opposite of the leave campaign’s main argument. Note: this article first appeared on Policy for Play, before the referendum was held.
[+] Read More…