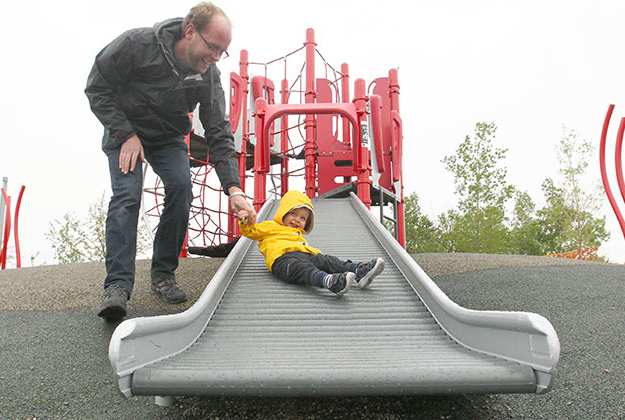 It’s not often public engagement sessions for City of Calgary projects pause for juice boxes and cookies. But, when you want young children to share their thoughts on a project that’s one of the first of its kind in Calgary, snack breaks are necessary.

Two Calgary parks will soon be getting makeovers and instead of traditional equipment like swings, slides and monkey bars, the playgrounds could feature natural play elements such as plants, boulders, wood and sand.

The small playground at Mills Park, in Inglewood, is being redeveloped into a so-called natural play space and the city is also looking at putting a natural playground in Confederation Park.

Natural playgrounds aim to inspire active, imaginative and self-directed outdoor play, according to the city.

“They connect children young and old to nature,” said Daniel England, a project manager at the City of Calgary.

“They’re made out of wood, sand and water — those primordial elements like what you would find in the mountains or the woods.”

Kids and their parents had a chance to learn about the emerging concept and help design a natural play space for Mills Park at an engagement session on May 14 hosted by the city.

The session included a visit to two new inner-city playgrounds that incorporate components of natural play, a needed snack break, and an opportunity for kids to design their ideal natural play space using a map of the Mills Park site, markers and cut outs of natural structures.

When the Mills Park playground is built with items like leave pits, wooden log jams, mud pits, rocks or boulders and minimal to no traditional play structures, it will become one of the first natural play spaces in Calgary.

A $160,000 grant the city recently received from the Lawson Foundation destined for research and construction related to the emerging form of play spurred the two projects.[+] Read More