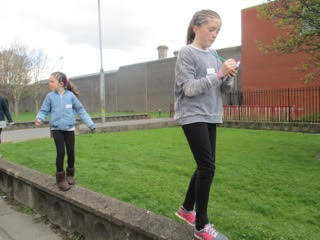 How can we make public space more accessible to children? Well, we could start by asking them what they might suggest! This is what happened recently in Dublin, Ireland, during a process known as Urban Design Review. The focus of the design review was an area in the city called Phibsborough and, as part of the process, a group of children participated in a workshop during which they were asked to share their views on the area.

Together with a local artist and an urban childhood researcher they walked through Phibsborough, exploring laneways, car parks, hidden green spaces and an abandoned tram yard. The children subsequently mapped their experience and suggestions for how they would like to see the area developed.

Phibsborough is an urban village just over a kilometre from the city centre, which was once home to the renowned Irish writer, James Joyce. To the west there is a lovely park and playground; to the north, a beautiful amenity in the Royal Canal; and to the south there is another attractive park and playground. However the centre of this urban village is dominated by a dull 1970’s shopping centre and office block, surrounded by a car park. 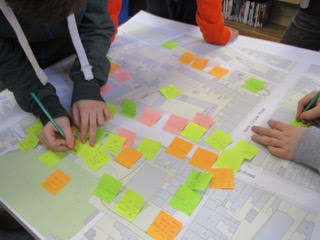 The village is bisected by a heavily trafficked road, bringing commuter traffic in and out of the city centre. Pedestrian mobility is restricted and the area is quite run down. Residents who would like to reinvigorate the area have been working with a team of architects and planners to initiate dialogue with the local authority on ways to improve the public realm. The children’s proposals fed into that discussion.

They made many excellent suggestions, which are encapsulated in five key themes:

•  Making the centre a destination

Inevitably the run down state of the shopping centre was a focus of attention and the children suggested painting up the concrete façade, fixing poorly maintained areas, and converting the car park into a playground. They also proposed making the area more pedestrian friendly, having trees children could climb and putting frogs into the pond at the local library.

The children felt there was nowhere special for them in the village centre. They identified their favourite places as the park to the west of the village centre and the park to the south east, but had difficulty identifying anywhere they especially liked within the centre itself. But they made lots of interesting suggestions for improvements that would draw them in – from child-friendly cafés to cultural centres, such as a theatre or a cinema.

After the workshop, the children’s ideas were shared at a public meeting and many of their proposals were similar to those proposed by adults. It was agreed that the children’s suggestions would, in fact, help to improve the quality of the public realm for users of all ages. The next step in the Urban Design Review is political; the implementation of ideas will depend on the balance of power between residents, the local authority and the developers. Hopefully the children’s voices, so clearly expressed through this process, will now be heard.

Fantastic! Thank you for your suggestion I think children should have more space in urban decisions… several time they have a different view Abou space.