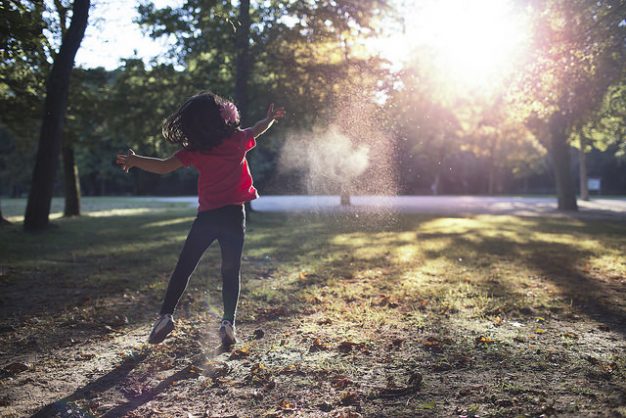 Skrammellegeplasden in Emdrup has been described as the birthplace of ‘modern’ playwork. The junk playground has served as a beacon and inspiration for playworkers all over the world but is now under threat from similar financial constraints that have closed several much-loved adventure playgrounds in this country like Stonebridge and Battersea. Changes by the local authority will see children segregated by age to make the playground a more traditional day care centre. Older children will be moved out. Staff and supporters are afraid this will lead to increasing restrictions in free play and risk, losing the ‘children’s democracy’ and autonomy that has characterised the site for over 70 years.

Skrammellegeplasden occupies a special place in the history of children’s play. In the 1930’s the Danish architect C.Th.Sorensen imagined a ‘sort of junk playground in which children could create and shape, dream and imagine and make dreams and imagination a reality’. This was based on his observation of children playing with the building materials on a new housing construction and his belief that children should be allowed to play without adult intervention. Rather than provide adult-built equipment and purpose built structures, loose parts – packing cases, bricks, water, trees to climb and earth to dig – should be available to children for them to create their own playground.

The first playground inspired by this vision was built at Emdrup on the outskirts of Copenhagen in 1943. This was surrounded by a six foot bank and wire fence to prevent noise and offer a sense of seclusion for the children. It was decided the site could not be left without supervision. The first leader, John Bertlesen set the tone.

‘The children are sovereign and the initiative must come from them. The leader can make suggestions, but he must never demand. He must obtain tools and materials needed or requested by children, but he must at any moment be prepared to give way to new activities. To organise and arrange programmes is to stifle the imagination and initiative and preclude children whose lively curiosity and interests demand new outlets.’

The adventure playground concept was introduced into Britain by Lady Allen of Hurtwood after a visit to Emdrup. It was championed in the 1950’s by the National Playing Fields Association. The idea was quite straightforward. Through the provision of tools and materials and discrete adult supervision children could dig, build, change their environment and engage in co-operative projects using their own initiative to create their own play space. This spirit still lives on in the many adventure playgrounds in England and places like Plas Madoc in north Wales or the Baltic Street Adventure Playground in Glasgow.

The supporters of Skrammellegeplasden are concerned that the character of the playground will be altered forever. That the younger children will miss out on the interaction with their older peers and their parents will not be given the choice to allow their children to come and go as they are now. They have asked for messages of support addressed to the Mayor and Town Council about how the playground is a ‘special and unique place’ that has inspired them and influenced their work with children.

Thanks, Steven, for alerting us to this. It would be a scandal of international proportions for the management of this site to be changed in the way you describe. The traditional model of Emdrup has been proved to work in thousands of settings to provide a unique way of promoting not only child development but also the social development of whole neighbourhoods. I propose an international campaign to resist the process described.

The traditional form of Emdrup AP has provided a successful model the thousands of APs throughout the world. It provides a unique setting which supports not only child development but also the social development of the community in which it is set. The International Play Association, which is composed of hundreds of member organisations has approved it and given it special status. I believe that it would be an international scandal to change it as proposed. Let’s campaign NOW to preserve it.