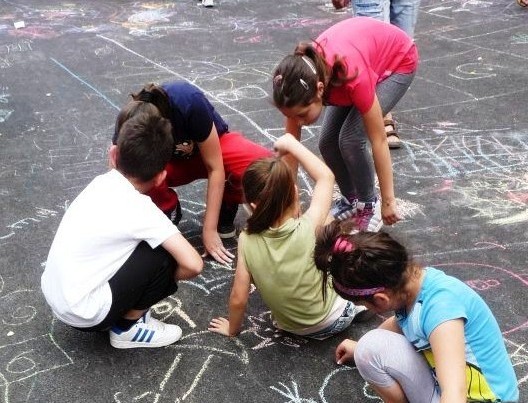 The 28 Urban Thinkers’ Campuses, taking place worldwide between June 2015 and February 2016, aim to solicit inputs into the New Urban Agenda – the main outcome document of the Habitat III conference to be held in Quito, Ecuador in October 2016.

The Urban Thinkers Campus, 2016 is an initiative of UN-Habitat’s World Urban Campaign, conceived as an open space for critical exchange between urban actors who believe that urbanisation is an opportunity which can lead to positive transformation. It is part of the wider framework of the Habitat III campaign, ‘Towards a New Urban Agenda’.

This February, a special Urban Thinker Campus , with the sub-heading, ‘The city we need: open for art’. will take place at the Department of Architecture, Design and Urbanism in Alghero, Sardinia, in Italy. Within the overall theme, TaMaLaCà will aim to champion there the needs and rights of marginalised and under represented urban populations, with a special focus on children.

This special campus will focus on the relationship between art, city life and urban environment, in order to ‘rethink the urban agenda’, in which governments can respond by promoting a new model of urban development with the capacity to integrate all facets of sustainable development: to promote equity, welfare and shared prosperity” (Dr. Joan Clos, Secretary-General of Habitat III).

Open for art = open for play

Participants will have the opportunity of shaping the Habitat III agenda by helping to define the critical issues of art, and more specifically public arts, as one of the most important ingredients of the city of tomorrow, and the lives city dwellers.

TaMaLaCà, as part of the committee, will especially focus on art and community (social needs, social dynamics and social values). Within this theme, as well as emphasising the role of art in helping to sustain the quality of playfulness in the lives of adults, we are also especially interested in the part children can have in the debate: but how to introduce the positive and playful sense of children within such an academic context? Apart from talking to them, is it possible to do something more?

Children as an active and ‘tactical’ urban group

In the Urban Thinker Campus, a special session will be entirely dedicated to the topic of ‘the child’. Children will also be represented in other sessions; for example, the Tactical Urbanism session, with Mike Lydon as special guest.

Other parallel initiatives with the special contribution of children are to be set-up by TaMaLaCà. The main one will be the exposition: ‘[The art of] reclaiming public space through play hosted by the Department of Architecture, Design and Urbanism in Alghero. Here participants will have the opportunity to explore all the materials, interact with them and come to a real understanding of the full scope of the process that created the FLPP project. More than this, TaMaLaCà aims to involve children in other extemporaneous, playful and artful urban interventions. We will update you soon about it!