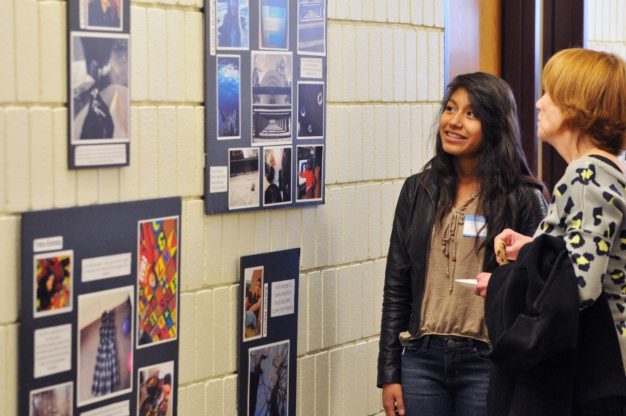 Five Applications of Photovoice as a Method for Children’s Participation

Growing Up Boulder – a child-friendly city initiative in Boulder, Colorado, USA – has generated 5 variations of the photovoice method for use with different age groups and abilities. Youth organisations and researchers from universities use photovoice as a creative tool to identify what children like and don’t like in their community.

Photovoice is a creative method that helps children easily assess strengths or concerns about their community and to communicate these ideas both visually and verbally with policymakers, city leaders or researchers (Derr et al., 2013; Gant et al., 2009; Goodhart et al., 2006). It can also help to extend the conversation: from young people to the entire community. It can do this through exhibits that invite a larger community of participants (Driskell, 2002; Derr et al., 2013).

The method was developed as a means of pairing photography and text to express ideas (Driskell 2002; Wang & Burris, 1994). This method has been particularly effective for children and young people, as it provides a mode of creative expression and helps facilitate dialogue (Derr et al., 2013).

Growing Up Boulder has employed this method in both neighbourhood assessment projects (such as the 15-minute neighbourhood), as well as in evaluations of public and open space. In this context, children are given coloured cardboard frames and a camera. Young people frame and photograph elements of their environment they like (in green) or do not like (in red). They then share their assessments with each other and with project leaders. This is useful in an early stage of a project: children learn to articulate in detail what they like or dislike about a site. For some projects, the photographs have been displayed at public meetings or in community centers within the city.

2. Adapting the Assessments with Young Children:

The Boulder Journey School adapted this method for its children, aged 4-5. Children guided adults to take pictures of elements within a public space. Adults then printed the photographs and children drew on the top of photographs as an overlay. Adults recorded their ideas about how they would change the site (Shaffer, Bauer, & Hall, 2013). This allowed children to directly modify a public space in the ways they desired.

The photovoice method was also employed in a different context with the City of Boulder’s Youth Services Initiative (YSI), which serves predominantly Latino youth from public housing and low income neighborhoods. When invited to participate in a public space redesign project, the YSI coordinator felt that many of the youth she worked with might not be interested in a relatively abstract planning project when they are worried about family safety, hunger, and deportation.

As a result, Growing Up Boulder and YSI launched the Neighborhood Photovoice project to enable youth to use photography to document their neighborhoods and the issues they face but sometimes find difficult to articulate. The project provided training in photography and literacy, developed participants’ voice and sense of agency, and educated other people in Boulder about the diversity of issues its young residents experience through a public exhibit (Derr et al. 2013)

Growing Up Boulder adapted the photovoice method again as a means for children with disabilities to communicate their likes and dislikes of a park slated for redesign. In this case, children in the EXPAND program of Parks and Recreation were paired with an adult volunteer and were sent on a scavenger hunt through the park. They were asked to find a variety of places, with cards labeled “hard to get to,” or “a nice place to play,” or “someplace you want to change.” The children held the cards and posed for a picture in the places they identified. This adaptation allowed children with a diversity of abilities to participate and express their views.

The most recent adaptation of photovoice was for a resilience planning project. In this case, youth were asked to take pictures in their neighborhood and city that they thought represented supportive or negative influences on resilience. Youth took photographs of a wide range of subjects, from positive subjects, such as friends, mountains, and pets to negative ones, such as coal power plants or a pile of coins to represent the high cost of living. Youth spray painted boxes and attached photographs and images to the boxes to communicate a message. For example, one box flipped and asked, “which is more important, money or nature.” The addition of the box added a creative element for self-expression. 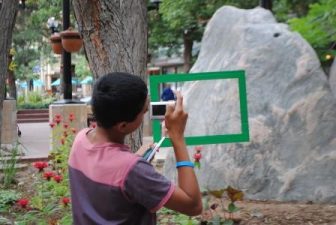