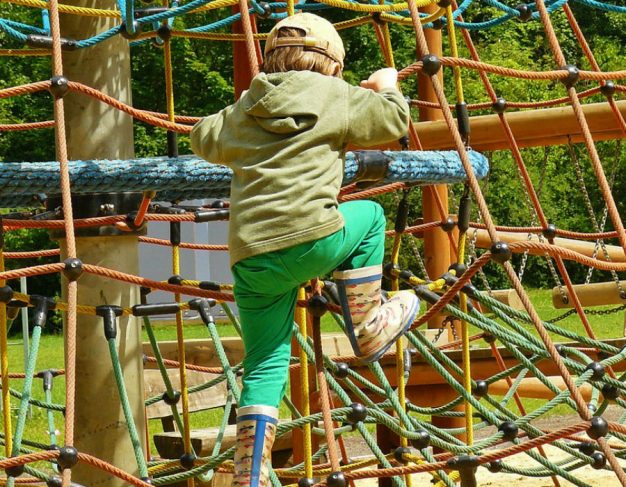 Playgrounds need to be more challenging to benefit children

Children’s playgrounds are not challenging enough, says Susan Herrington, a professor in the school of landscape architecture at the University of British Columbia in Vancouver. Herrington conducted her research with colleague Dr. Mariana Brussoni, observing children at 16 Vancouver child care centres. “Children are bored…it was like adults channel surfing, the children sort of go from one thing to the next, and nothing seems to engage them,” said Herrington. “You want them to be deeply engrossed in play.”

What creates that engagement? Nature does. Herrington says that children need natural elements that change – grass that gets high, leaves that fall and trees that grow. They also need to be able to manipulate their play space with elements such as mud and sand. And, they want to be able to create, to be able to shape their play environment.

Research from Sweden indicates that this is not just a North American problem. Swedish researcher Märit Jansson had similar findings when she asked school children how they used playgrounds. “Well-designed, safe and aesthetically pleasing things are not always interesting for children,” says the landscape architect who works at the Swedish University of Agricultural Sciences. Jansson interviewed 141 children aged 6-11 in two small Swedish towns. She asked open questions to groups of the kids regarding how they use their playgrounds.

The children voiced their frustrations with boring playgrounds. “The older children in particular complained that there was nothing to do there. There weren’t enough challenges,” says Jansson. “Children want to be co-builders. They want to affect the playground, enjoy physical challenges and create their own spaces on and around the play equipment and installations. “

Herrington believes that a growing culture of fear in North America has resulted in too safe playgrounds across North America. Parents believe that children will be safe by not taking any risks.