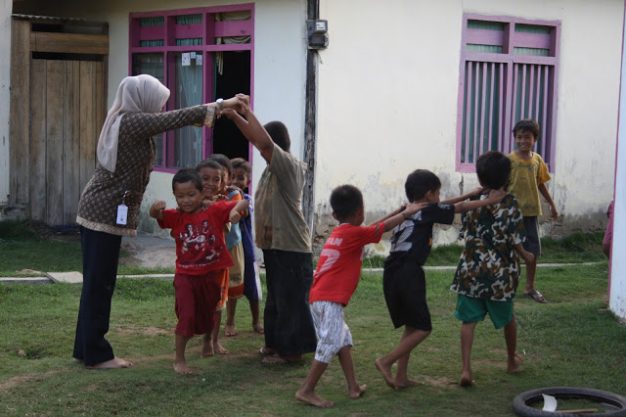 The many traditional games of different Indonesian cultures, passed down through countless generations to today’s children, as well as helping to realise their right to play, also serve to teach them much of the timeless wisdom of their heritage.

Article 31 of the United Nations Convention on the Rights of the Child maintains “that every child has the right to rest and leisure, to engage in play and recreational activities appropriate to the age of the child and to participate freely in cultural life and the arts,” and “that member governments shall respect and promote the right of the child to participate fully in cultural and artistic life and shall encourage the provision of appropriate and equal opportunities for cultural, artistic, recreational and leisure activity.”

Playing is the main activity for children, whenever and wherever they are. Children use most of their time to play, so that playing is often said to be the child’s world.  Children can express whatever they want through play, as well as improving their skills and abilities. Children’s play has considerable benefits for mental, emotional, psychomotor, cognitive and social development. All these benefits can be found especially in all kinds of traditional games.

Indonesia has various traditional games throughout its provinces that are encountered under a different name because Indonesia also has a variety of languages and cultures. Traditional game play is a tool that has existed since ancient times, and handed down through generations. Traditional games have many positive values. For example, most of the games require physical activities, so the problem of childhood obesity can be avoided. Their socialization with other people will get better as the game is played by at least 2 children. Moreover, in a group game they also have to determine a strategy, communicate and collaborate with team members.

One traditional game is called ‘Ular naga (dragon-snake)’ that is usually played in late afternoon in fields or open spaces. Two children will act as a gatekeeper, using their arms as barriers. Other children line up sequentially according to their height; children who are behind holding on to the waist of his/her friend in front, and so forming a long ‘snake’. The snake then goes through the gate while singing a song:

The ‘gates’ will close at the end of song and randomly trap a child. The two children who acted as the gates will argue to affect children who are caught in order to choose one of them and stand behind them. And so on until all children entangled. The game is a very good means to develop the emotional intelligence of children. The game can also be a means to train children in working together through interactions that occur. In addition, children will better understand how to respect others, tasting defeat and victory.

Almost all traditional games are played in groups. In a group, a child will learn to hone his/her emotions that give rise to tolerance and empathy for others, as well as comfort and familiarity with social interaction. Example game: bentengan, kasti (similar to rounders), bekel (similar to ball jacks)

Some traditional games train children to count and determine the steps that must be passed, for example: engklek (similar to hopscotch), congklak, jump rope

In general, traditional games encourage players to move, such as jumping, running, dancing, spinning, and other movements. Examples of the game are: enggrang (stilts), jump rope.

Many games use tools made from natural materials such as plants, soil, tiles, stone, or sand. The activities of children closer to nature enable them to become more integrated with nature and to develop their creativity. Examples of such play are: toy cars made from grapefruit peel and ‘engrang’ made of bamboo.

Chants and sounds are a very familiar aspect of traditional games, such as in the games, ‘Unrequited Pantun’ and ‘Dance Shell’.

While playing, children can experience and release their emotions. They shout, laugh and move. This kind of activity can be used as therapy for children experiencing distress.

Of course there are many more benefits of traditional games for the development of children who are in their infancy, at the outset of their emotional lives, self-development, and social interaction.

And so there is a clear message to parents and practitioners, to allow children to enjoy playing outside with their friends, while perhaps also offering some guidance: passing on the wisdom to be found in these traditional games so that these and future generations may benefit.