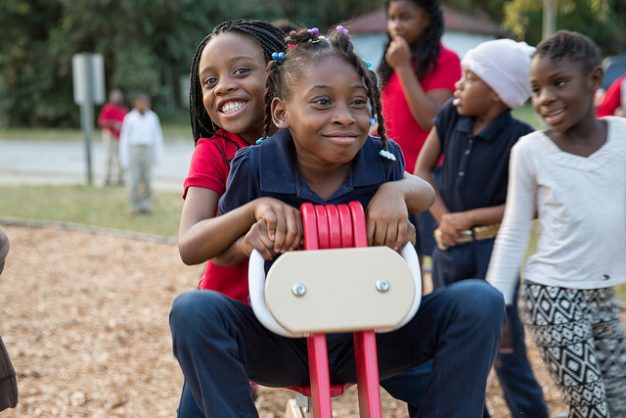 A recent blog by the Canadian urbanist, Jillian Glover identified the ten features she believes are the key to building child-friendly cities. Yet there is a glaring omission from the list: nowhere, even in the sub-text after each item, does the word ‘play’ appear.

To be fair, ‘Fun and Whimsy’ is a specific item (the last) on the list, but here she suggests that ‘cities can add many things to inspire the inner child in all of us’. Perhaps play is also implied in the items about street safety and bike-ability, but if this list is representative of current urbanist thinking about children, many will be alarmed that play is not explicitly included. To redress the balance, therefore, and because a genuinely child-friendly city should first and foremost be a city where children can play, here is an alternative list

One – End the domination of traffic

Playing near their homes is the area of children’s play lives that has been most curtailed by the modern world. Research shows that traffic – moving and stationary – is the greatest enemy of street play. Traffic calming schemes alone do little to reverse this trend. What is needed is more home-zones, pedestrian areas, and shared space designs – as the norm, not the exception – so that the streets where people live are once again for people of all ages to enjoy, not just for vehicles to drive down.

It is not just residential streets that could benefit from a design revolution to end the tyranny of the car. Shared public spaces in ‘down-town’ cultural and shopping centres are also blighted by the dominance of traffic. Shared space, pedestrian schemes, and the redirection of heavy traffic away from social hubs can transform the life of inner city areas and, along with child-friendly design principles, enable children to enjoy public spaces as much as older generations do. Children need space that simply welcomes them into it and gives their parents confidence to let them play. They will do the rest.

Three – Break the mould – and the hold – of the public playground

By far the greatest investment explicitly in children’s play by any municipal authority is its fixed equipment playground budget. Yet many, if not most, children’s playgrounds offer limited play value, selling children short with their reductionist approach, their over-cautious designs and perpetuating the assumption that children’s play is separate and discrete from wider public life, needing special equipment, fences and flooring. Although well-designed play structures have their place, a ludic city, through its parks, public squares and ultimately its streets and sidewalks should provide children with all the play opportunities they need.

Many dense urban areas are a long way from having the confidence of either children or their parents as safe places to play. In contrast, then, to the general shift away from municipal playgrounds, these neighbourhoods need bespoke play areas staffed by skilled playworkers, responsive to local children. The best such provision is the traditional adventure playground, developed and co-created with its young users, always evolving and changing as they do, but always dedicated to nothing but their time and space to play. One of these wherever there is the most pressing need would cost a fraction of a city’s education budget.

Five – Make parks for everyone, including teens

While the children’s playground is a standard fixture of most municipal parks, they are, conversely, too often lacking facilities for older children and young people. Indeed many seem to discourage teenagers, fearing harm to the horticulture or anti-social behaviour towards other users. This attitude should be unacceptable: urban public parks should feature a range of skate parks, games areas and hang-out shelters for young people, who should also be engaged in their conception and design.

There has been a rapid expansion in school-aged childcare in many modern cities; yet the quality of such provision is rarely scrutinised, especially in the deregulated, under-resourced world of public service austerity that has prevailed in most countries since the financial crash. Cities often have authority for education, and therefore can adopt standards for school-based childcare also. These should be based on the practice and principles of playwork. School-aged childcare should be run by playworkers, who alone of the children’s workforce are dedicated to and skilled in supporting children to enjoy their own time and space.

Seven – Open up schools for play

For most urban communities, the local school is the greatest resource solely for children. Yet in many, if not most cities, schools are narrowly focused on the curriculum and the school day. School grounds are potential play spaces for local children throughout the day, and with a more outward-looking, community-focused approach, these under-utilised public assets could be local ludic hubs. This would go a long way towards ensuring all children have somewhere to play in their local area.

Eight – Review the policing of children

A society that often wants to ban hopscotch and ball games, while accepting a daily toll of death and injury to children simply trying to get from one side of a street to another, really should re-examine its priorities. City authorities should adopt more sensitive, enabling approaches to the policing of children and young people and train their police forces accordingly.

A study of road safety for the Policy Studies Institute (Hillman et al, 1990) found that the numbers of children walking to school alone – a good proxy indicator of children’s ‘licence to roam’ fell from 80% in 1971 to a mere 9% by 1990 and more recent evidence suggests this has not improved since. One way to return children to the outside world and again give them the confidence to play there, would be to make sure that the one journey they have to make five days a week is safe for them to make alone.

To the extent that cities have authority for planning policy and planning decisions they are directly responsible for the future shape and nature of the built environment and how it responds to people. Spatial development plans should specifically identify space for children’s play as a planning priority, while planning guidance for housing in particular should specify minimum standards – quality and quantity – of play space in new developments.

The need to play is so universal, its manifestations so diverse and the barriers to it so complex that, as our list implies, a co-ordinated approach is needed. Crosscutting play strategies should be adopted by city authorities – with the political leadership and interdepartmental cooperation necessary to make them effective. Only with this specific and strategic commitment to enabling children to play within the public spaces of their communities, will we be moving closer to the genuinely child-friendly city.