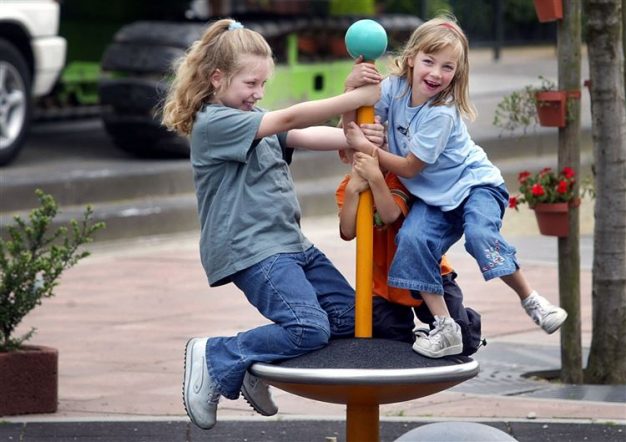 Child-friendly communities provide safety, through traffic calming devices, such as ‘home zones’, and opportunities for play, through incorporation of natural features, public art and parks. Yet the evidence suggests that deprived neighbourhoods are more likely to have social and environmental characteristics presenting risks to chlidren’s health.

Child friendly for all

There is growing consensus among city leaders in the Netherlands that the neighbourhood design plays a significant role in the well-being of children.

In 2010, the Mayor and the local councilors of a Dutch town Zwolle, agreed to become the first city that adopted the French EPODE approach which was translated into the JOGG (Jongeren op Gezond Gewicht/ Ideal healthy weight for the youth) approach in the Netherlands.

Zwolle is a lively city with a population of more than 118,000. It boasts a beautiful city center with historic buildings, canals and the remaining parts of the old city wall. The city is also rich in art and culture. Zwolle was already once voted as the “greenest city” in Europe during the “Entente Florale” horticultural competition in 2006.

The initiative introduced measures on how to support and promote healthy eating and physical activity among children aged 3 – 19 years, who came from poorer backgrounds.

The local authorities of Zwolle have been very proactive and through collaboration and partnership with public and private organisations, have implemented a number of projects with the goal to promote child friendly and healthy activities in the identified areas:

1. A stony school yard has been renovated into a very modern and attractive sport activity yard offering eatable greenery in 1m2 moveable vegetable garden vessels.  The schoolyard was built to be easily accessable to the neighbourhood.

2. A dull grassy play area, which is maintained and owned by the local government has been transformed into a ‘PlayNature’area with built in playgrounds and is now owned and managed by the local residents.

4. New trees, plants and fruits including apples, walnuts, berries, raspberries and strawberries have been planted to provide a relaxing environment for the local residents, promoting their health.

Local primary schools together with children and their parents participated in an anlysis of the local neighbourhood with the purpose of creating child-friendly environment and to allow children to be more autonomous.

“This resulted in the identification of 11 barriers that prevent children from walking and cycling among primary school children. One of these barriers was an unsafe crossing on a 50km road, which divides the neighbourhood in two,” said Bakker.

“Therefore, a safe crossing between the PlayNature area and the central park has now been developed by the residence living nearby. And child-friendly routes between child destinations, marked by green (safe), orange (watch out) and red (don’t go here) footsteps have been built.”

Creating an environment in which people can live healthier lives with a greater sense of well-being is a hugely significant factor in reducing health inequalities.

“Mothers of the youngest children from different ethnic backgrounds were involved in designing and decorating a safe route, which has a city farmhouse, crèche, shops and playgrounds in order to improve their children’s and their own physical activity, integration and language development.”