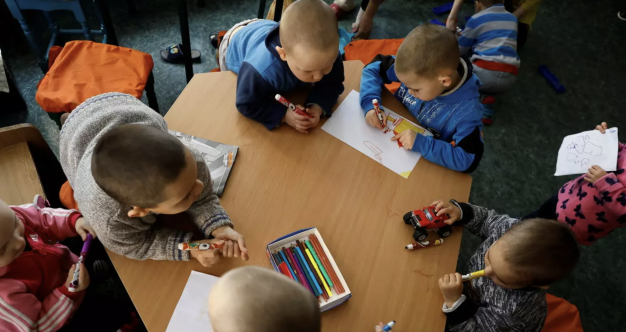 Published on 17-01-2023 at 09:50
Children evacuated from eastern Ukraine draw and play at a state shelter in Lviv. Image: Reuters/Zohra Bensemra

The simple act – for most of us – of getting our children safely to and from school is a very different story for the people of Ukraine.

But a year after the country became the focus of Russian aggression, there is perhaps some light at the end of the tunnel, thanks to a European-wide commitment to rebuilding schools and, crucially, ensuring the school run is possible.

The news that the European Commission and the Government of Ukraine have signed a €100 Euros million support package for the reconstruction and rehabilitation of schools damaged during the war across Ukraine is a hugely significant step. It includes around €14 million Euros allocated from an ongoing contract with the Polish Development Bank – Bank Gospodarstwa Krajowego – to purchase school buses and bring Ukrainian children safely to school.

‘Ukraine’s future begins with its children back in school’

An EU-wide solidarity campaign is also underway to donate school buses for Ukraine, by way of the EU Civil Protection Mechanism. Some 240 buses are already now on the way from the EU and its member states, and more are planned.

Ursula von der Leyen, President of the European Commission, said: “Russia’s targeted attacks against civilian infrastructure, especially as winter grips the country, are a deliberate crime against millions of innocent people, and they are a gross violation of international law. The EU’s top priority is to bring back as soon as possible Ukrainian children back to school.

We are delivering on our promise to support the rehabilitation of schools damaged and destroyed by Russia’s brutal war, and we will also deliver school buses for Ukraine so children can actually travel to school in the best possible conditions. The future of Ukraine begins with its children back in schools.”

The €100 million assistance package includes: €34 million in humanitarian aid, out of which €20 million channelled through the United Nations Office for Project Services (UNOPS) and €14 million through the United Nations Development Programme (UNDP). This support will focus on light and medium repairs including repairs of windows, roofs, doors, sanitation and heating facilities, as well as providing classroom equipment in learning spaces and bomb shelters.

‘Many children have no classroom to go to’

The devastating effects of the war on Ukraine’s learning infrastructure are clear – over 2,800 education institutions have been damaged or destroyed, affecting around 5.7 million school-aged children.

Many youngsters simply do not have a classroom to go to, and in a country whose communications infrastructure has also been targeted, nor can online education be relied on, as power and access to IT equipment is limited.

And so the rehabilitation of school buildings and the provision of school buses have become a top priority for the EU. The EC says it ‘acted very quickly’ to ensure funding so that affected children have the possibility to return to in-person education as soon as possible in the best possible conditions.

Olena Zelenska, First Lady of Ukraine, said: “Today, less than a third of children in Ukraine have possibility to regularly attend a school. The rest have to study online or in a hybrid format. Due to constant shelling and blackouts, it becomes increasingly difficult.  For my Foundation, the restoration of the educational process is a priority. Education of our children today is our contribution to the common European future.”