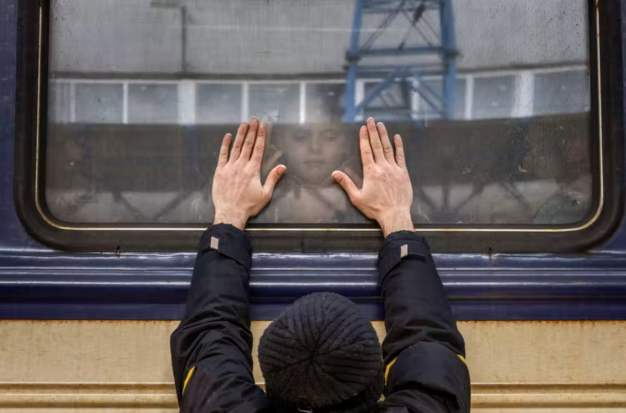 Published on 06-12-2022 at 08:36
A 41-year-old man presses his palms against the window of a train as he says goodbye to his five-year-old daughter as she leaves for Lviv at the Kyiv station on March 4, 2022. He was staying behind to fight Russian forces. (AP Photo/Emilio Morenatti)

In this devastating year for Ukraine, the awarding of Lviv with the title of European Youth Capital 2025 just hours after being plunged into darkness by a missile strike, represents a true symbol of hopeful defiance.

Furthermore, the decision by the jury of the European Youth Forum is surely a powerful statement of affirmation that it is the young who represent all our futures.

The EYF says it based its decision on detailed plan submitted by the municipality and TVORY!, the local network of youth spaces. And the symbolism is even greater when you consider that Lviv had only joined the competition on 21 February – a mere three days before the country was invaded.

Millions of lives across the country were suddenly plunged into turmoil and chaos, while Lviv, with a population of a 750,000 people, quickly became a humanitarian hub for Ukrainians fleeing other parts of the country, ultimately providing invaluable shelter to around 250,000 displaced citizens.

The EYF says that invasion, and the new reality it forced on Lviv, ‘brought the municipality and TVORY! to revise their application and create a new programme that fits the needs of young people experiencing war, as well as a plan for a hopeful future’.

The Lviv team built its programme with three goals in mind: To encourage young people to stay in Ukraine; to encourage those who had left the country to return to it and to build connections between young people in Ukraine and the rest of Europe.

And so the jury awarded Lviv the title to recognise the vision it was offering young Ukrainians, and a programme committed to tackling the emotional, moral, physical and financial losses that Ukraine’s youth were experiencing. Lviv’s vision answers such needs by making the European Youth Capital into a centre that helps young people survive, live, and develop in a modern and a European Ukraine.

Tom Matthew, European Youth Forum board member, said: “This is the first time that a European Youth Capital has won the title while its country is at war. Despite the challenges, Lviv introduced a detailed plan that is full of hope and aspiration. We share this hope with Lviv’s young people and we will be by their side when they rebuild their country.

“Even under attack, Lviv was able to adapt its plans and present a coherent programme. We are inspired by Lviv’s resilience and we are confident that the city will make their year as the 2025 European Youth Capital a great success.”

‘Lviv’s plan is full of hope and aspiration’

Lviv’s programme for 2025 comprises youth forums on issues as diverse as security, science and creative industries, as well as a 24-hour event combining training, networking and entertainment for young people and youth bodies across Europe. The city will also work to improve skills development, volunteering opportunities and employability amongst its younger citizens.

Cities from across Europe compete every year for this title, and interest in 2022 was as strong as ever, with applications from 19 municipalities. The final round of four also included Fuenlabrada in Spain, Izmir (Turkey) and Tromsø (Norway). Representatives from each city and local youth organisations presented their respective applications at a ceremony in the Albanian capital, Tirana, the 2022 European Youth Capital

Lviv’s leaders say they dedicate the year not only to the young people living within its boundaries but also its residents who fled to other countries, as well as the many young Ukrainians who have been displaced from their hometowns and now live in the city for an unknown period of time.

“The war has changed us and made us more mature, conscious and even more united. Freedom is our only choice and highest value. And we can surely say that our biggest achievement of the whole year as a finalist of the European Youth Capital 2025 is protecting our land and right to freedom and peaceful life“, said young people from Lviv during the application process.

The European Youth Forum champions itself as ‘the voice of young people in Europe, standing up for their rights and striving for societies where young people are empowered and are encouraged to achieve their fullest potential as global citizens’.