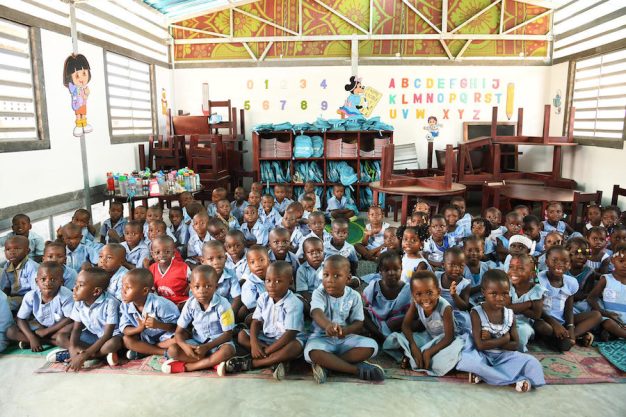 With an estimated population of 4.5 million, Abidjan is the biggest city in Côte d’Ivoire and the third-largest French-speaking city in the world, after Paris and Kinshasa. Every day, the Abidjan metropolitan area produces 288 tons of plastic waste.

“But what if that trash could be recycled into something useful? UNICEF has partnered with Conceptos Plásticos, a Colombian social business that transforms plastic waste into construction materials to build a better world for children,” says Sarah Ferguson of the children’s charity.

“One of the biggest challenges in Côte d’Ivoire remains the large number of children outside the school system,” adds Marie-Pierre Poirier, UNICEF’s Regional Director for West and Central Africa. Schooling is compulsory in Côte d’Ivoire for all children between the ages of 6 and 16, but more than 2 million children are out of school, simply because there are not enough classrooms. Existing classrooms are often filled beyond capacity, with more than 100 students in a class.

UNICEF’s solution was to turn to recycled plastic bricks – similar to the world-famous Lego bricks – to build a model classroom at a school in Gonzagueville, on the outskirts of Abidjan. UNICEF and Conceptos Plásticos plan to build 30 more new classrooms in Côte d’Ivoire over the coming year.

“By innovating in construction approaches, through the recycling of plastic waste that pollutes the country, UNICEF can support the government to build quality schools in a very short time and at a very interesting cost,” adds Poirier.

Conceptos Plasticos, which has been operating since 2016, says that its projects have resulted in around 8,400 Ivorian children being able to access a better quality classroom and education. Click here for more information on its recycling and building processes.