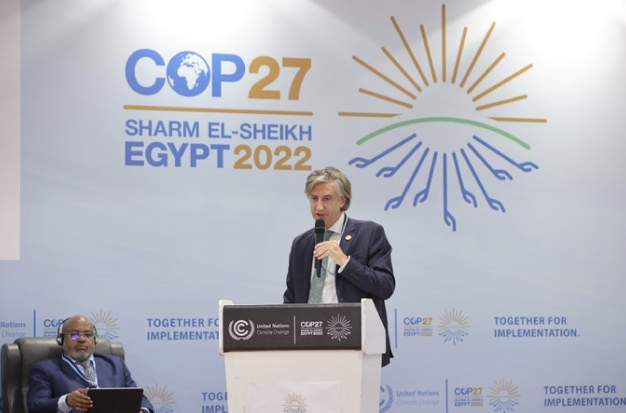 Leaders at COP27 have taken a ‘small but critical step in securing justice for children most affected by the climate crisis’, by formally recognising children as agents of change and setting up a fund for loss and damage.

That’s the view of the Save the Children charity, but add that ‘far more needs to be done to secure children’s futures’, and on World Children’s Day, the child rights organisation urges leaders to draw inspiration from the voices of children who were heard loudly at this COP.

About 774 million children – one-third of the world’s total child population – are living with the dual impacts of both poverty and high climate risk, according to a recent Save the Children report. In the study, 83 per cent of children consulted in 15 countries said they see impacts of the climate crisis or inequality, or both, affecting the world around them. A total of 73 per cent believe adults should be doing more to address these issues.

This year, Save the Children supported children to attend COP27 and have their voices heard.

Ashraqat, 16, from Egypt, said: “This is a crisis we haven’t caused, but we’re trying to fix. I’ve been affected by heatwaves. I felt I was suffocating, and could not lead a normal life. I could not eat or study, I could not sleep well. All my basic rights were taken because of climate change.”

Mustafa, 12, from Minya on the western bank of the Nile River in Egypt, said that increasingly heavy rains have caused flooding and power outages that sometimes mean he cannot go to school or study. He said: “I didn’t cause the climate crisis. I never built a factory, I never bought a car, I never polluted the environment.”

Save the Children welcomes the fact that, for the first time at COP, countries have formally recognised children as agents of change in addressing and responding to the crisis, and have agreed that governments should include children in the design and implementation of climate-related policies.

I didn’t cause the climate crisis. I never built a factory, I never bought a car, I never polluted the environment.

The commitment announced at COP27 to the establishment of a loss and damage fund is also hugely positive, Save the Children said, and is largely down to decades of campaigning work by communities most affected by the climate crisis, including children and youth and Indigenous groups.

However, details are yet to emerge about whether the proposed fund will meet the intensifying needs of the children and their communities who are at the sharp end of the climate crisis, such as Ashraqat and Musafa.

Separately to a loss and damage fund, pledges on climate finance continue to be inadequate, Save the Children said. Time is running out as the world struggles to cope with increasingly intense extreme weather events and the human and economic costs they incur. Investments now will reduce costs and risks in future – risks that children in particular will face as they grow up.

Finally, but crucially, without the commitment to rapidly phase out the use and subsidy of fossil fuels, the window for a stable and secure future for children continues to get smaller. A report by Save the Children and the Vrije Universiteit Brussels released last year found that under original Paris Agreement emission reduction pledges, children born in 2020 will face far more extreme weather events such as wildfires, scorching heatwaves, droughts, crop failures and flooding than their grandparents. But the likelihood of this will hugely reduce if we can limit warming temperatures to 1.5 degrees Celsius, according to the report.

‘Across the world, children are going hungry’

Save the Children’s Global Director of Poverty and Climate, Yolande Wright, said: “Across the world, children are going hungry, they are unable to go to school, their health is at risk, and many are displaced due to the impacts of the climate crisis that are already happening. This is mostly felt by children in low-income countries and those impacted by inequality and discrimination.

“One of the standouts of COP27 was the incredible participation of children and youth speaking truth to power. The Children and Youth Pavilion, led by youth organisations and supported by Save the Children and other groups was a constant hive of activity. But children need to have influence in the negotiations themselves and be able hold their governments to account. It is welcome that leaders are finally starting to wake up to this fundamental right – but much more must be done.

“We welcome the progress on Loss and Damage – including the creation of a new fund. But we know far more finance is urgently needed.

“Crucially – as we mark World Children’s Day – the failure to protect children from a future blighted by the continued use of fossil fuels is unacceptable. Children are clearly demanding a safer, cleaner world – and we know there is no time to waste. ”

‘Many obstacles exist before children can be included in climate negotiations’

Ekin Ogutoguallri, Save the Children’s Director for the Middle East, Eastern Europe and North Africa Regional Office, said: “Having the opportunity to bring children to COP this year meant we were able to hear from Mustafa, Ashraqat and others how the costs of the climate crisis are measured not only in economic terms or even in the injustice of human lives, but the human and social costs – losing their ability to go to school, to play with their friends, to have shelter or food to eat.

“This is a step in the right direction but many obstacles still exist before children can be meaningfully included in climate negotiations. We expect more to be done in coming years to include children in the decision-making process.

“Children should be consulted before COP to understand their needs and ideas, and governments must make every effort to create mechanisms to ensure children have the opportunity to bring their experiences and recommendations to COP with a specific focus on the participation of children most impacted by climate change and inequality.”

Text: Save the Children