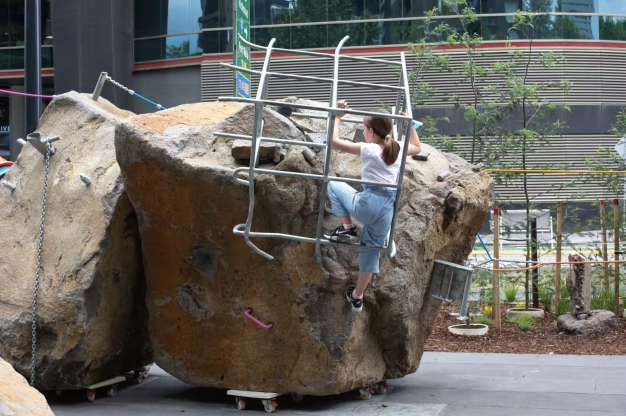 Imagine this: a heap of colourful plastic buckets stacked on top of each other to form a climbable bridge, monolithic bluestone boulders holding up a contorted slide, a pile of concrete demolition debris moonlighting as a resting spot.

At every point, children can be seen swinging their bodies from warped, dented monkey bars and balancing along rope-webs strung between stones.

Would you let your kids come here and play?

This new playground in Melbourne’s Southbank is the work of artist Mike Hewson. The project can be confusing for the public. Is it a playground? A sculpture? Or an unfinished piece of infrastructure?

Hewson’s playable public art parks in Sydney and Melbourne are known to be “risky” – but risk means different things to different people. And it’s exactly the risks his art takes that makes it so valuable, writes Sanné Mestrom of the University of Sydney

The risk of no risk

Urban play has long been synonymous with the cultural life of art and the city. In the decades of Europe’s baby boom, new playground concepts emerged with a focus on “free play” (distinct from earlier playgrounds resembling open-air gymnasiums), as one of children’s fundamental needs.

“Tufsen”, Egon Möller-Nielsen’s unusual sculpture was the first unscripted free play sculpture of its kind, created in 1949, bringing together abstract art and play in a public space.

This new approach generated a boom in playground sculptures. 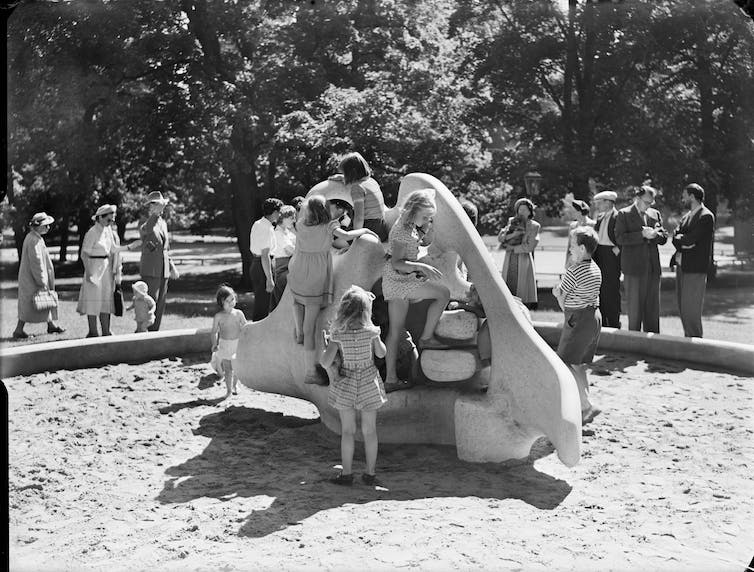 In the early 1980s, we saw a significant shift in response to questions of risk, hazards and children’s safety, which resulted in fears and threats of litigation.

As play-safety standards were introduced in Australia, the United States and the United Kingdom, innovation in the arena of a playable public realm slowed. As soon as the standards began to be referenced in liability cases, playspace designers began to follow them.

Designs outside the specifications were avoided and playgrounds were standardised into the “boring” versions that still dominate most of our play spaces, where the potential movement of children is scripted: up, across and down. 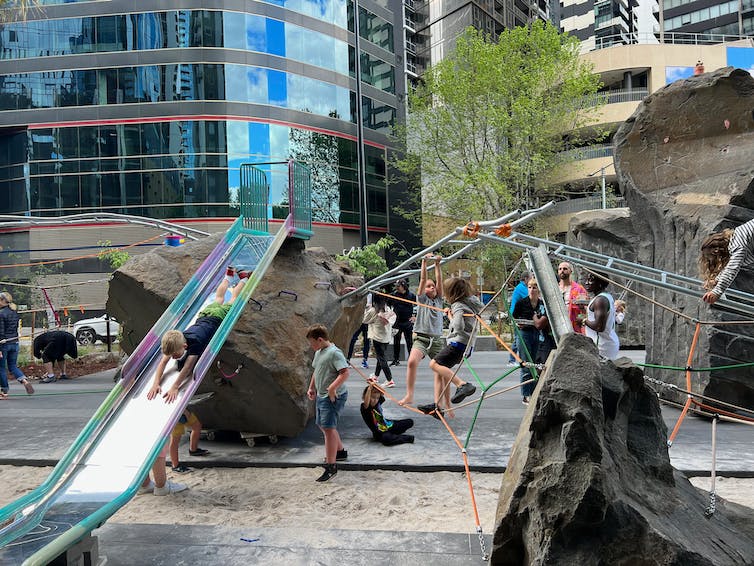 The new playground at Melbourne’s Southbank doesn’t look like the playgrounds of your childhood.
Mike Hewson

Over the past 30 years, interpretations of these safety standards continue to regularly confuse the meanings of “risk” and “hazard”.
A risk is something the child is aware of, forcing them to identify, analyse and overcome the challenge; a hazard puts one in danger because a condition for injury exists the user cannot perceive.

Conflating these meanings has resulted in a cultural attitude toward play that is highly risk-averse.

This risk-aversion is in contrast to the mounting research on the benefits of risk for children.

Risk-aversion can have long-term health implications on adolescence and into adulthood, potentially impacting the development of anxiety, depression, obesity and diabetes. 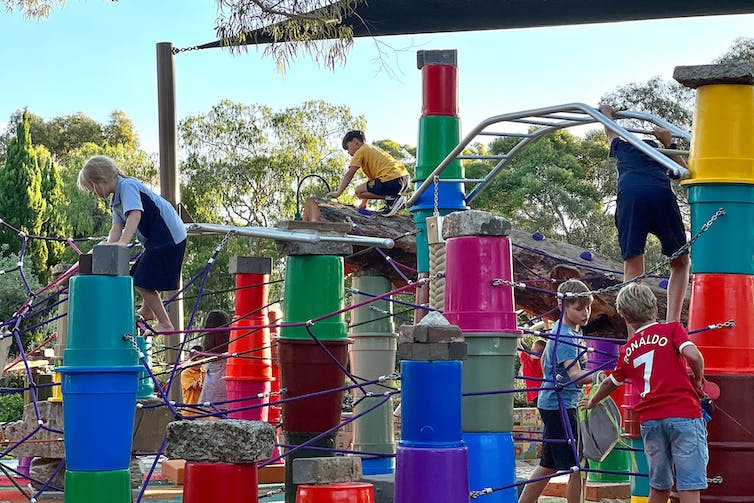 In fact, researchers Jonathan Haidt and Pamela Paresky suggest contemporary society “mollycoddles” children. The risk-of-no-risk is a question of resilience – not only physical but also, perhaps more importantly, psychological resilience.

Psychological resilience is the capacity for adaptation in the face of tragedy, trauma, adversity, threats or significant stress. Put simply, resilience is the ability to “bounce back” from challenging experiences.

Based on this premise, Hewson’s “risky” sculptural play environments can bolster, fortify and increase psychological resilience among children. 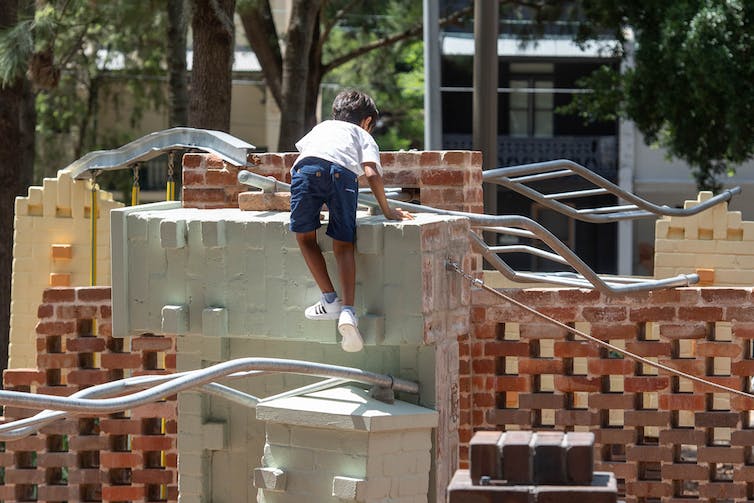 In contrast to the conventional playground where movement is predetermined, Hewson’s projects offer children the opportunity to explore unfamiliar, unscripted, innovative and playable sculptural worlds.

When given the chance, even very young children show clear abilities to negotiate unfamiliar spaces, manage risks and determine their own limitations.

Hewson’s sculptural playgrounds don’t just offer the opportunity for children to take risks. Their very construction appears to be risky: all playable parts appear to be improvised, cobbled together with cardboard and chicken wire, balanced just-so or teetering on the verge of collapse. 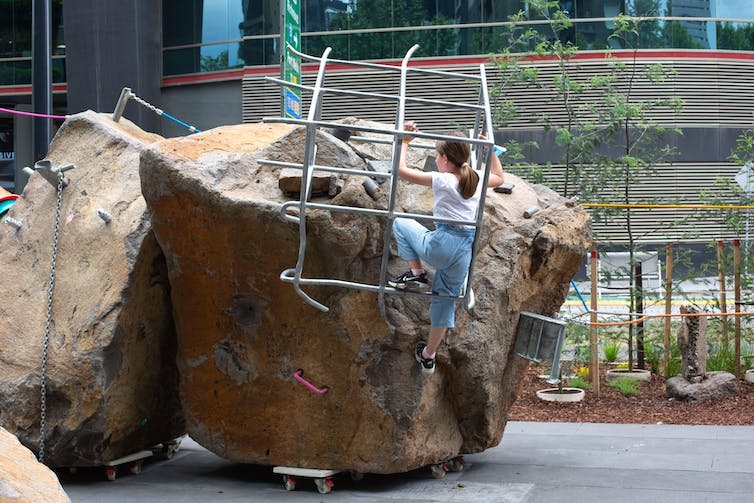 Hewson’s sculptures seem like they’re teetering on the verge of collapse.
Mike Hewson

And yet nothing is quite as it appears. With Hewson’s background in engineering, each playable element has been meticulously designed, structurally engineered and thoughtfully integrated into the urban realm.

This illusion of danger gives the works a sense of the uncanny, appealing to art-lovers and children alike.

In the art world, Hewson’s works are important for their bold and cheeky irreverence of the traditions of public art.

By making these sculptures playable – and seemingly defective – they tip the hierarchy of “art” upside down. 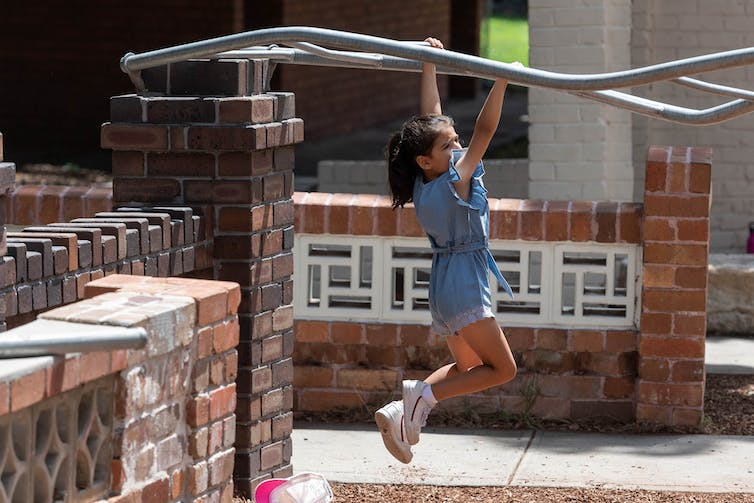 This might look broken – but it’s highly engineered.
Mike Hewson

Australia has a long-standing reputation of presenting “plonk art” in public spaces. Plonk art is a pejorative slang term for the large Modernist artworks intended for government plazas, corporate atriums and open parks designed to be looked at but not touched.

Hewson takes sculpture off its pedestal and integrates it directly into the public domain, while also engaging local communities in the creative development stages of his projects.

For this experimentation, he receives some backlash from certain sections of the community – but his convictions keep him pushing forward. 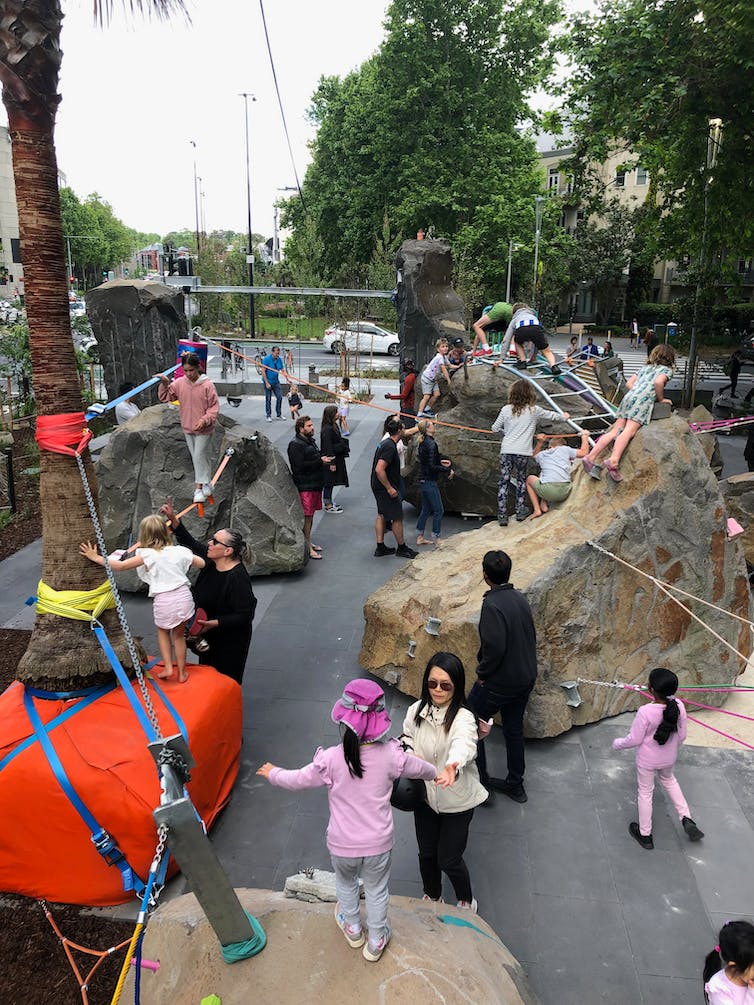 We need to give kids space to take risks.
Mike Hewson

His works advance the role of public art in creating a more culturally rich, intergenerational public domain while also challenging conventions of the ubiquitous de-risked playground.

So what do you think? Is it time we integrate more playable art opportunities into the public realm? 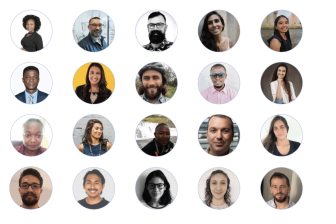