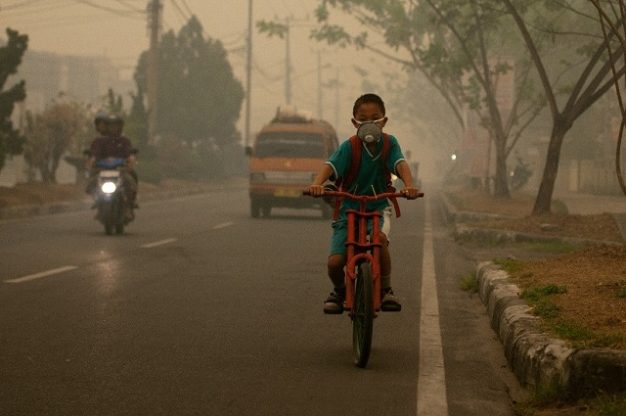 With the world’s focus firmly on the COP27 annual climate conference, a survey of almost 300 youth and children across 35 cities and towns in 16 countries worldwide has revealed that air pollution is their biggest concern.

Sharm El-Sheik in Egypt is currently hosting COP27, a fitting context for World Vision and other members of the Global Alliance Cities 4 Children to reveal the feedback they’ve had from young people about their most pressing urban health concerns.

And the consensus was clear – being able to breathe in their cities topped the list, according to World Vision International.

Aline Rahbany, World Vision’s Urban Programming Technical Director, said: “Children and young people face many problems in urban areas, especially fragile areas like settlements and slums. But this survey once again shows that environmental issues are at the forefront of their minds.

“Air pollution came top, but proper waste and garbage management, and other issues affected by climate change like access to sufficient, clean water also scored highly.” Raising awareness of the problems that affected them and youth empowerment programmes were the top two results.

The respondents also voted on what could be done to help bring about desperately needed change in their cities.

Shania, 15, from Tanzania, is a participant of a SAUTI-Youth Project supported by the European Union and African Union, and of World Vision’s Citizen Voice and Action programme, which both help to raise the confidence of youth to speak up on behalf of their communities and themselves. She has been invited to speak in person to leaders of the COP27 Presidency.

Other youth have recorded messages for COP27 leaders about the impact of the climate crisis on their lives. These include Souksavanh, 15, from Laos, whose family lost their house, rice field, and animals to extreme weather; and Frederick, 17, from Zambia who worries drought will mean him exchanging schooling for searching for food.

Another popular solution voted for by the young people was regreening. World Vision will also be bringing young people from Niger to Egypt to tell the story of how nature-based solutions like Farmer-Managed Natural Regeneration or FMNR* turned bare land to rich green farmland.

‘We hope and pray this is a summit of actions’

“It is vital that leaders at COP27 hear the voices of children affected by climate change – and that they take action,” said Andrew Morley President and CEO of World Vision International. “World Vision is there to ensure this happens, and to share one of our great pioneering solutions – Farmer Managed Natural Regeneration, regreening vast swathes of land and bringing hope to communities. We hope and pray that this will be a summit of actions, not just of words.”

The urban children and youth survey was led by World Vision with Global Alliance Cities 4 Children partners that include Plan International, UNICEF, Slum Dwellers international and Dreamtown NGO as part of an urban thinkers campus that contributes to UN-Habitat’s World Urban Campaign.

The World Urban Campaign is a coalition of urban stakeholders to raise awareness about positive urban change in order to achieve sustainable cities and communities. Click here for more information.