How to make living in cities healthier for everyone

Clapham in South London is known for its Common, an area of greenery that’s popular with joggers and children alike. But in two neighbourhoods in the district, there’s a huge difference in life expectancy, with men living on average 12 years longer in one street than those living just a few streets away. For women, that gap is seven years.

This is according to Impact on Urban Health, a UK organisation focused on solutions to issues from air pollution to childhood obesity and part of the Guy’s and St Thomas’ Foundation.

More than half the world’s population (around 4.4 billion people) live in urban areas today and the proportion is expected to rise to 70 per cent by 2050, World Bank data shows.

Here Kieron Boyle, the CEO of Impact on Urban Health, explains how to make cities healthier for everyone in the years to come.

What are some of the differences in health outcomes in cities?

“Levels of childhood obesity really vary: they fall very unequally in the population, particularly for families living on lower incomes. You tend to see higher levels of obesity in lots of urban areas. What we do is work out how to reduce some of those gaps over time.

“In London, like most cities, there are real divides in urban health between people who experience very good health outcomes and people who experience very, very poor health outcomes. In South London, where we work, there are two streets. One of them is in leafy Dulwich Village. One of them is Queen’s Road, in Peckham. There’s two and a half miles between them. It takes about 12 minutes to get between them on a bus. But there is a 12-year life expectancy difference between those two roads. That’s not right. It’s basically the difference between getting to see your grandkids or not. And so it’s vital that we work out how to address that gap.”

Urban health: why is there such a big divide?

“It’s really about the intersection of urban diversity, the built environment and income inequality, and those play out together in all sorts of ways. So, for example, if you’re in London, if you’re from a minority ethnic group, you’re much more likely to live in inner city London. If you live in inner city London, whatever your ethnicity, you’re much more likely to breathe dirty air. You’re much more likely to have multiple long-term conditions from a young age as well. So these things interact together and it’s that interaction that leads to real differences in how health is distributed. It’s not distributed at all fairly and some communities, some residents of cities, experience much worse health outcomes than others. But the point is, it’s entirely preventable. There’s lots that we can do about it.” 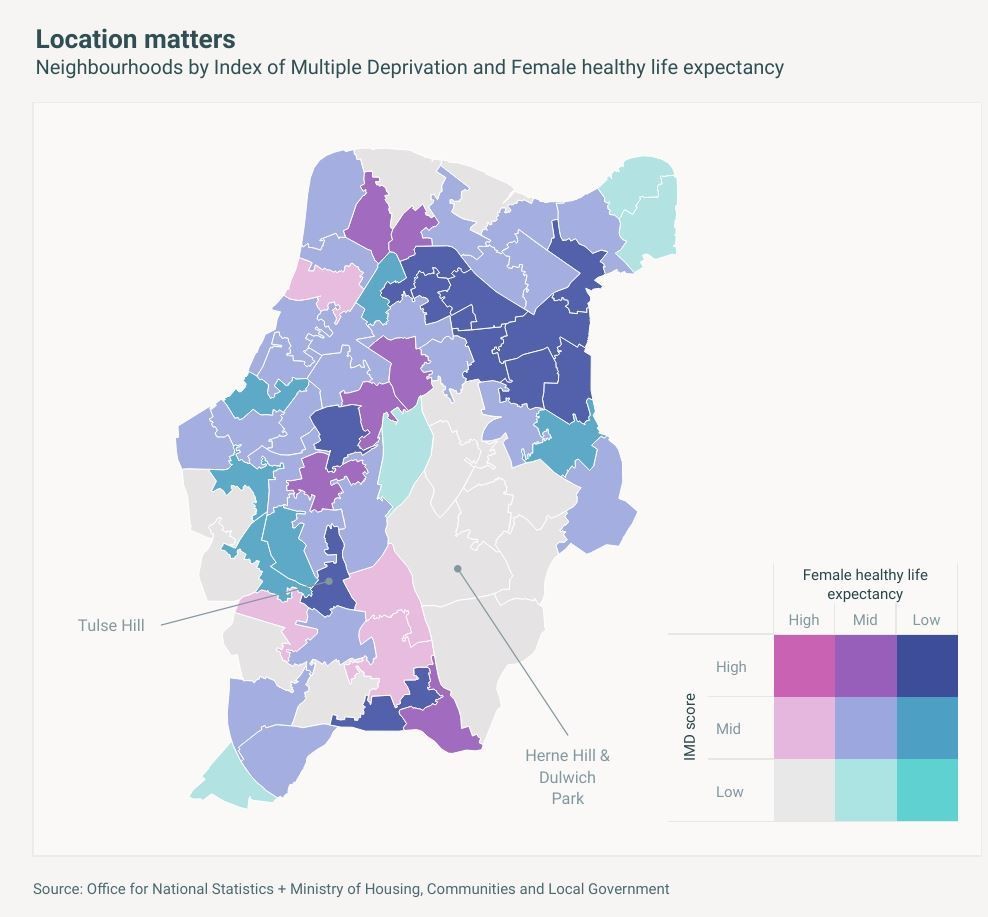 How urban health outcomes like life expectancy varies widely in parts of London, depending on location and income. Image: Impact on Urban Health

What can be done to close the health gap in cities?

“The main thing we can do to tackle these urban health differences is take a very broad view of what drives our health – and it’s much broader than healthcare. There are three things that really impact on our health: One is our biology and our genetics. The second is our individual actions. And the third is the environment that we live in, grow up in, work in. That third area by far has the biggest impact on our health, so if we want to improve our health, we need to think about those environments. How do we make them healthier for everyone? In cities, there’s a lot you can do about that because cities are designed, which means they can be redesigned. One area we particularly focus on is the role of businesses in reshaping cities in ways that make them healthier for everyone.”

What can businesses do to make cities healthier?

“We think about what businesses can do for their customers, what they can do for their employees and what they can think about in their supply chains. For example, one thing that really impacts on all of our health is what food retailers are selling. There’s a lot food retailers can do to sell healthier food, or promote healthier food, or even put healthier food on shelves where kids are more likely to see it. We’ve run studies in London that show you can do that in a way that leads to people buying healthier baskets of food that actually increases store profits. So it’s a win-win answer.

“Businesses can also do quite a lot about how they keep their employees healthy, and in particular how they can keep some of their lower paid employees healthy. We’ve done work in London where about one in six people works a night shift, which can actually be really bad for your health. It can really disrupt sleep patterns and be bad for your eating patterns as well. But employers can do all sorts of tweaks around what a night shift looks like and to make it healthier for people and also improve attendance rates from their employees.

“There’s a lot businesses can do about their supply chains as well. In London, there are huge issues with dirty air and a lot of that air pollution now comes from freight being delivered. We have run a big pilot using electric cargo bikes for that last mile of delivery. All of these things practically change the environment in which people live and can actually reduce some of those challenges around health inequalities, where often the people who do the very least to contribute to the problem experience the worst health outcomes.”

How can cities actually help our health?

What sort of impact does your work have?

“One project that has had a huge impact is what we call the COVID Financial Shield. Our health and our finances are really interlinked. And once our finances get out of control our health can get out of control as well. But it works the other way round. If your health starts getting poor, it can be difficult to keep a job. The Financial Shield works with primary care doctors who identify patients whose finances are likely to be getting into [difficulty] and they prescribe debt advice to help them manage their finances. It’s actually paid for by housing associations and utilities firms because it’s in their interests that the people who use their services, have reliable ways to pay them.

“What we’ve found through running the Financial Shield scheme is that, on average, by having that debt advice, people on the scheme have increased their income by about £2,000 a year. They’ve also really had seen some great improvements in health, both physical and mental. So it’s a real example of a sustainable, practical way in which you can deal with a real urban health challenge around financial insecurity and ill health.”

What can city authorities do to promote good health?

“Urban health challenges, like air pollution, can sometimes feel overwhelming. But actually, what’s most important is to get started with some things that are quite practical. Although the issues are quite complex, the solutions don’t have to be. City authorities have to be quite thoughtful; the process has to be equitable in its own right. And it really only starts by listening very closely to those communities that experience the worst health outcomes and understanding from them where the challenges really are and designing with them what the solutions look like. Health is a collective asset and we can all build it together. And there’s a lot within your gift to make urban environments healthier for us all.”