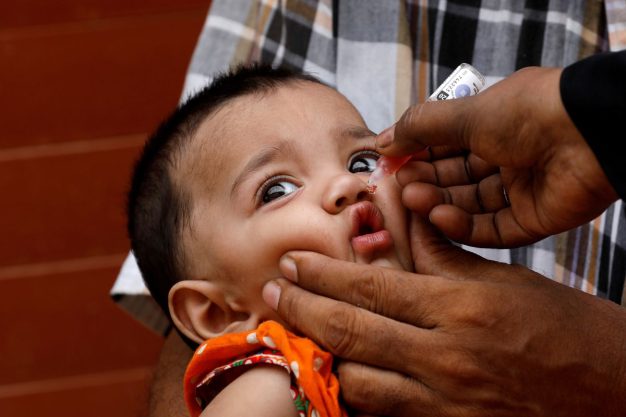 Published on 19-10-2022 at 10:03
A girl receives polio vaccine drops, during an anti-polio campaign, in a low-income neighborhood as the spread of the coronavirus disease (COVID-19) continues, in Karachi, Pakistan July 20, 2020. REUTERS/Akhtar Soomro/File Photo

The global fight to eradicate polio – cases of which are once again on the rise – has been stepped up with a $2.6 billion funding boost from world leaders, charities and philanthropists.

But the World Health Organisation says that around double this amount will ultimately be needed if the world is to tackle a disease that has seen 29 cases this year, compared to just six in 2021.

The Global Polio Eradication Initiative (GPEI) announced the 2022-2026 Strategy to end polio at the World Health Summit in Berlin. It will support global efforts to overcome the final hurdles to polio eradication, vaccinate 370 million children annually over the next five years and continue disease surveillance across 50 countries.

Svenja Schulze, Germany’s Minister for Economic Cooperation and Development, said: “No place is safe until polio has been eradicated everywhere. As long as the virus still exists somewhere in the world, it can spread – including in our own country.

We now have a realistic chance to eradicate polio completely, and we want to jointly seize that chance. Germany will remain a strong and committed partner in the global fight against polio.

Charities are also central to this initiative, with the Bill & Melinda Gates Foundation providing no less than US$S 1.2 billion, Bloomberg Philanthropies US$ 50 million and the Islamic Food and Nutrition Council of America US$ 1.8 million. Children’s charity UNICEF is also giving US$ 5 million.

The World Health Organization says wild poliovirus is continuing in just two countries – Pakistan and Afghanistan, yet there have been a small number of new detections in southeast Africa linked to a strain originating in Pakistan. Additionally, outbreaks of cVDPV, variants of the poliovirus that can emerge in places where not enough people have been immunized, continue to spread across parts of Africa, Asia and Europe, with new outbreaks detected in the United States, Israel and the United Kingdom in recent months.

This latest ‘pledging moment’, says WHO, is a major step towards the US$ 4.8 billion that will be needed to fully implement the strategy. If fully funded, then the organisation estimates it would result in US$ 33.1 billion in health cost savings this century compared to the price of controlling outbreaks

Dr. Tedros Adhanom Ghebreyvesus, WHO Director-General, said: “The new detections of polio this year in previously polio-free countries are a stark reminder that if we do not deliver our goal of ending polio everywhere, it may resurge globally.

‘We must stay the course and finish the job’

“We are grateful for donors’ new and continued support for eradication, but there is further work to do to fully fund the 2022-2026 strategy. We must remember the significant challenges we have overcome to get this far against polio, stay the course and finish the job once and for all.”

Seth Berkley, CEO of Gavi, the Vaccine Alliance, said: “As we work together to stop the transmission of all polioviruses globally, we are more grateful than ever for the generosity of our donors, the leadership of governments and the mobilization of communities.

These pledges will support GPEI’s new strategy which correctly focuses on mass vaccination campaigns, concerted efforts by partners to strengthen essential immunization and integration with other critical health interventions and a further roll out of next-generation oral polio vaccines. These three measures combined are essential if we are to eradicate polio once and for all.

Click here for a WHO factsheet on polio (Poliomyelitis).