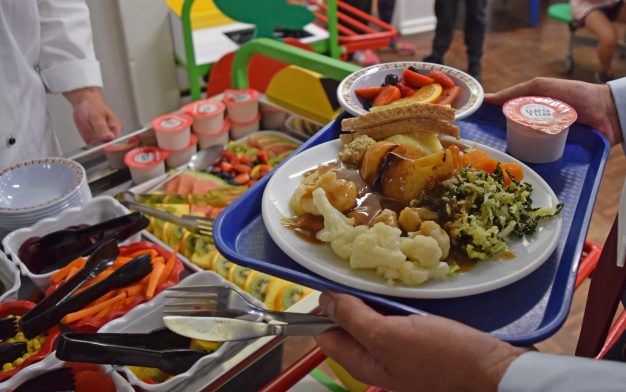 A survey of school meal providers operating in nearly 10,000 schools paints a ‘stark picture’ of the challenges facing the school food industry across England and Wales.

That’s the conclusion of The School Food People – or LACA – which is the main professional body representing school meal providers.

It comes as campaigners step up their efforts to try and persuade the government to increase the eligibility threshold for children receiving free school meals.

Responsible for feeding around 1.8 million pupils every day, LACA found that the overwhelming majority of contractors, around 91 per cent, were experiencing food shortages.

Bread, fish, cheese, pasta and potatoes have been the items most affected, resulting in menus having to be changed and prices increased as a result of more processed foods being introduced – with children and families feeling the knock-on effects.

‘The challenges facing our industry are only getting worse’

The survey was only carried out in May, yet LACA says prices have since risen by a further 30 per cent ‘across the board’. Some caterers say they have had to pay up to 50 per cent more.

Brad Pearce, chair of LACA, said: “Despite the best efforts of our members and dedicated frontline staff, the school meals industry is on its knees. The challenges facing our industry are set to get worse over the coming weeks and months.

Without an increase in school meal funding the most vulnerable children in our society will go without, possibly, their only hot, healthy, and nutritious meal of the day.

LACA are also calling for school meals funding to be ring fenced, as this will help ensure funding f’ollows the child’. The budget is currently issued to schools who do not always pass the full amount to the caterer to provide school meals.

It says that while most of its members are still able to meet the mandatory school food standards, this is coming ‘at a great cost’, with some saying they have had to reduce portion sizes and offer less choice to cope.

But, it adds, meeting these standards may provide unsustainable in the long term without an increase in government funding. The 2.9 per cent increase in Universal Infant Free School Meals (UIFSM) announced in June is ‘insufficient’, it says.

LACA also wants the FSM eligibility threshold to be extended to include all children whose parents receive Universal Credit, the UK’s means-tested benefit given to low-income families.

‘Too many children are falling through the cracks’

Feed the Future is a campaign that says around 800,000 children are going hungry because they are not entitled to a free school meal, and their parents cannot afford to buy them a school lunch. Too many children, says LACA, are ‘falling through the cracks’.

It has the backing of action groups, education bodies, poverty campaigners and the celebrity chef Jamie Oliver, who has for years campaigned for healthier and more accessible school lunches.

Karen Taylor is from the Food Foundation, one of the organisations involved, and she said: “Government can deliver on its levelling-up promise by committing long-term to free school meals for all, but for this winter the focus should be on safeguarding low-income children facing cost-of-living pressures by ensuring they receive a hot lunch.”

In addition, a study by accounting firm PwC for Impact on Urban Health suggests the cost of extending free school meals to all school children in poverty is ‘far outweighed’ by the benefits, with PwC saying there would be a net benefit of some £2.4 billion pounds over 20 years.

The government’s current policy on free school meals puts the threshold for those on Universal Credit at £7,500, but a spokesperson said this week that it would be keeping the eligibility rules ‘under review’.